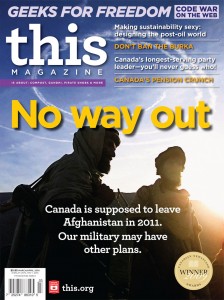 Cover of the March-April 2010 issue of This Magazine. Click to enlarge.

The March-April 2010 issue of This Magazine will be landing in subscribers’ mailboxes this week and is now on most newsstands coast to coast. (If you haven’t subscribed yet, this is a great time to do it, locking in a great price before the HST comes along. Just sayin’!) As always, the stories will all appear here on the website over the next few weeks. We suggest subscribing to our RSS feed to ensure you never miss a new article going online, following us on Twitter or becoming a fan on Facebook for updates, new articles and other sweet interwebby goodness.

On the cover this issue is John Duncan‘s investigation into the Canadian Forces’ future plans in Afghanistan. As the clock ticks down to the 2011 date for pulling out, Duncan finds, there are plenty of reasons to doubt that deadline will be met, and that Canada’s military is quietly prepping for alternate scenarios — including the possibility of Canadian CF-18s supplementing the Nato air campaign. And Aaron Broverman finds that militarization is creeping into other aspects of our lives as well, in the form of a global geopolitical struggle to control the ebb and flow of information on the internet. As repressive regimes abroad—not to mention law-enforcement agencies here at home—look for ever more intrusive ways to monitor civilians online, a small clutch of Canadian hackers are fighting back and working to keep the lines of communication open. And while the Communist Party of Canada has long been in the political wilderness, finds Eric Rail, its leader, Miguel Figeuroa, has been busy anyway, serving as party leader for 17 years and changing Canadian electoral law in some pretty substantial ways in the process.

There’s plenty more: Ashley Holly McEachern sends a postcard from Honduras reporting on the coup that has thrown the country into turmoil; Nav Purewal uncovers the unlikely origins of a Canadian movement to ban the burka; Alison Garwood-Jones reports from January’s Interior Design Show on the designers who are planning for our post-petroleum future; Paul McLaughlin interviews Globe and Mail former Afghanistan correspondent Graeme Smith; Max Fawcett warns that Canada’s looming pension crisis is a demographic time bomb; and Susan Peters profiles the authors of a new graphic novel telling the story of Helen Betty Osborne, a Cree girl abducted and killed 30 years ago, and whose story has largely gone untold until now.

With new poetry by Jason Camlot; and new fiction by Jessica Westhead.