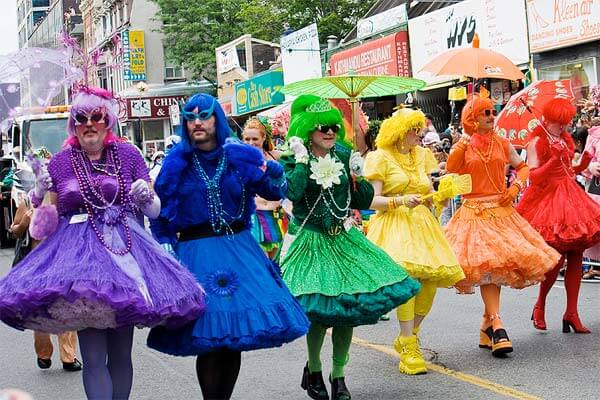 You’ve probably noticed by now, unless you’ve been hiding under a rock or just standing endlessly in line to offload your garbage, that Pride is in full swing.

I have to admit I find Toronto Pride kind of overwhelming. This is largely because I come from Scotland, where Pride is shared by two cities who take turns hosting the march, and the whole thing lasts an afternoon instead of 10 days.

Scotland’s march also tends to attract at least one dude with a sandwich board proclaiming that gay people are going to hell. Were that guy to show up in Toronto on Pride Weekend I’m not sure anyone would notice him in the crowd, or at least not without his shirt off. Toronto in late June is like Disneyland for gay people.

It’s easy to feel that an event this large has lost its political edge—particularly when you’re marching past buff guys in TD Speedos and paying $60 cover for a Saturday night party. If that’s not a sign that gay people are entering the social elite, I don’t know what is.

But a million people taking over the centre of the city over the course of a weekend still makes a political statement: namely, that there are enough of us to get 100,000 people out on Yonge Street without even exhausting our supply of queers. That’s a lot of people—enough for a small but fabulous army.

It’s easy to forget that in some people’s eyes, everything queer people do visibly and in public is political. Just last week a lesbian couple were harassed by security for kissing at the Air Canada Centre.

So, even though the live music isn’t nearly as good as last year (The Hidden Cameras! Free! That was when I decided Toronto was the best city on earth) and even though nobody wants to field sales pitches about why they should switch banks while marching for gay rights, the core of Pride is still what it always was, and it’s still just as important.

Even if you skip the after-parties and the overwhelming 10-day schedule of events, there are still plenty of reasons to grab some sunscreen, load up your water guns, and hit the streets.