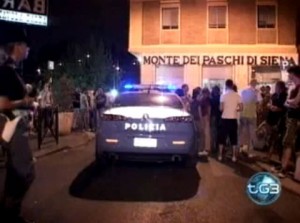 Several people were injured in Rome yesterday when two letter bombs were thrown into a gay neighbourhood bar. The attack wasn’t an isolated incident, but part of a pattern of escalating violence against gay people in Italy which some speculate has been fuelled by the election of Rome Mayor Gianni Alemanno, a member of the post-fascist National Alliance party.

It is hard to see these attacks as anything short of terrorism. Something pre-meditated like a letter bomb attack is in a different category from spontaneous acts of street violence. The intention behind it is to make gay people in the region feel under siege.

And it works. My partner spent 10 days in Rome this summer, and while her straight friends endured the whistles and jeers expected in Italy, she got a lot of cold stares, and angry taunts from cars. It was a level of harassment she hasn’t experienced in Toronto for many years. She avoided the gay neighbourhood, along Via San Giovanni, because of a sense that being queer in Italy was a much more dangerous, underground experience than she was used to.

The threat of violence can shape the character of a community. In Toronto, safety is not a constant concern for me, but it was a consistent issue in parts of Edinburgh after dark. I still instinctively let go of my partner’s hand at night when I see men walking towards us. At concerts and baseball games, the first thing I do is take the measure of the people sitting around us. When considering travel destinations, before checking out the beaches I look into how safe we’d be there.

I grew up in a place where people get drunk and start fights more often than they do in Canada, but it’s not somewhere where, statistically, gay people are actually all that unsafe. So I can only imagine what it’s like to go to a bar that might get bombed, and the kind of self-preserving reflexes you pick up as an identifiably gay person in those places.

It’s easy to get stuck in definitions of terrorism that involve training camps in the mountains and plots against government buildings. But it is no less significant when a faction of people set out to terrorize a community or class of people within their own country. This week, my thoughts are with the queer community in Rome.