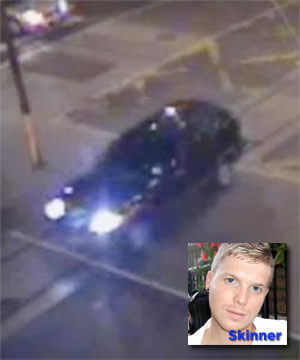 A CCTV image of an SUV suspected in the murder of Chris Skinner (inset).

It’s hard to read the story of Chris Skinner, the 27-year-old gay man who was beaten and then run over at Bay and Adelaide in Toronto just over a month ago, without feeling chilled. In addition to the obvious horror, there is something extremely disturbing about a violent attack you can’t pin an explanation on.

In some ways, news like this is easier to digest if you can point to something the victim did to bring it on himself. You know, something you would never do. And inevitably, rumours are beginning to circulate that the victim made the first move. What’s interesting though is that the queer community — those with arguably the biggest stake in convincing themselves that Chris Skinner wasn’t murdered solely for Walking While Gay — has refused to accept this explanation.

Instead, the queers have rallied around Skinner in the weeks following his death. On October 25 there was a candlelit vigil in the city’s gay village, and open skepticism has met the police’s assessment that this was not a hate crime.

I get the sense though from media coverage and from letters Skinner’s friends and former lovers have written to Xtra just to mention what a great guy he was, or to complain about the lack of mainstream media coverage, that what matters is not actually whether Skinner was murdered for being gay. What matters to the strangers who turned out to mark his death is simply that Skinner was gay.

“Community” is a word that comes up a lot in the queer press, and I have occasionally been guilty of typing it while doubting that what I am referencing really exists. But the reaction to Skinner’s murder looks to me like the definition of community. It assumes the best of its members, and assumes the worst of those who attack them. It matters less that Skinner’s murder could have happened to any of us than that it did happen to one of us. And amid the gruesome facts of his death, I can’t help but find something encouraging in that.