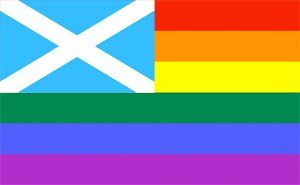 Scottish Flag and Rainbow Flag, together at last

I’m back in Scotland this month, for my first trip home since Christmas. Coming home is always incredible — a constant onslaught of the long-lost familiar — but being back also reminds me of some of the reasons I left in the first place.

I could give you a few of those, but lurking behind them all was a general sense of being at odds with my own country. Britain is not a place I’ve ever felt particularly safe as a queer, non gender-conforming person.

I don’t know how valid this discomfort is, or how much of it now is down to reverse culture shock, but it’s certainly true that I stick out here. People do a double-take when I walk into public washrooms. All of my gay friends have experienced street harassment of some kind, some of it vicious: an acquaintance was attacked last year by a man who followed her into a gay bar. Some of it merely irritating: for years I cut my own hair at home because I despaired of finding a hairdresser who would cut it short enough without hesitation and hand-wringing. In Toronto nobody looks twice at me, nobody yells at me in the street, and my hairdresser is queer.

Two years ago when I was a reviewer at the Edinburgh Fringe, I saw a stage adaptation of Stonewall, in which almost every straight person in the audience walked out, one by one. They’d obviously come looking for a bit of camp humour, but when it became obvious the transsexual character had lines and wasn’t just there to don fabulous outfits and sing, the uncomfortable fidgeting began. The same summer, I gave three stars to a Glaswegian comedian who afterwards accused me of being a lesbian with no sense of humour because I mentioned on my blog that his act was homophobic.

There is some less anecdotal evidence to support my sense that queers in Britain are worse off than those in Canada. In the news last weekend — buried behind five pages of Swine Flu — was a lesbian couple who have had to fight in the courts for access to National Health Service funding for in-vitro fertilization. Their fight has not been with the health service itself, but with their “regional primary care trust,” the body given the final say on matters of access to funding. Which GP you visit in Britain is determined by postal code, so simply switching doctors isn’t an option.

This story is interesting, because a few weeks ago while researching a story on transphobia in Britain I discovered that this same postcode lottery also means that transgendered people in some areas were being refused NHS funding for hormones and gender reassignment surgery.

This system is not all that different from the variation in treatments between Canadian provinces — gender reassignment is covered, for instance, in Ontario but not in Alberta — but I suspect the difference between ten provinces in Canada and 152 primary care trusts in Britain makes Britain’s a less visible problem. It’s entirely possible that you wouldn’t discover, say, that the Oxfordshire primary care trust routinely refuses to fund gender reassignment until you actually tried to access it.

Meanwhile, the Isle of Lewis just held its first civil partnership ceremony, six years after civil partnerships were introduced for same-sex couples in Britain. Reports in the press of a reluctant local registrar and the council’s tight-lipped promise to fulfill its “legal obligation” to carry out the service sounds like something from another era.

So as fantastic as it is to be home, I’m always a bit relieved to head back to Canada. Because increasingly I feel integrated there in a way that I never did in Scotland. And Toronto — for all that I am still bewildered by the traffic and I can only remember the names of five provinces at a time — feels safer and friendlier.

Cate Simpson is a freelance journalist and reviews and web editor for Shameless magazine. She lives in Toronto.