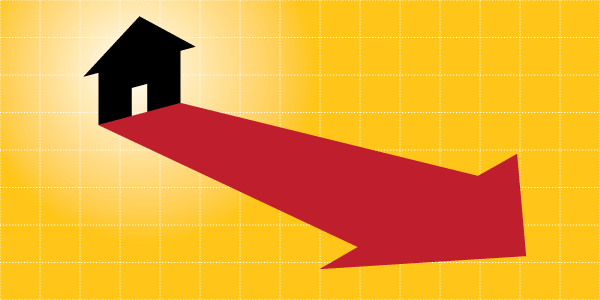 House prices: what goes up, must come down? Illustration by Graham F. Scott.

So much for that buyer’s market. After it appeared that the balance of power in the real estate relationship had finally swung back to the buyer after almost a decade in the seller’s favour, home prices in most major markets in Canada have resumed their seemingly inexorable climb. According to the Canadian Real Estate Association, almost 150,000 sales of houses and condominiums were registered during the April-May-June period, the fourth-best quarter on record since the organization began collecting data in 1994. These near-record sales aren’t being driven by low prices, either, as the cost of the average home in Canada is at an all-time high of $318,700, higher than the record set in 2008 before the subprime mortgage crisis in the United States triggered a global recession that has resulted in hundreds of thousands of lost jobs and billions of dollars in government spending aimed at resuscitating a global economy in full cardiac arrest.

This doesn’t make any sense. How can a housing market rise in the face of an economic crisis that has pushed unemployment to near-record levels, forced provincial and federal governments to run massive budgetary deficits, and raised the possibility of deflation? Why are people investing huge sums of money in an asset class that, just a few miles to the south, is in the midst of a three-year freefall that has no obvious end in sight?

Free money is a powerful enticement to irrational behaviour, though, and the banks have been doling it out for months now, empowered by record-low interest rates and the tacit support of the federal government. In the midst of last fall’s crisis, Canada’s banking industry enjoyed a brief moment of near-respect, as its comparatively restrained approach to lending was contrasted against that of the United States, whose policy appeared to be, in the words of Rolling Stone writer Matt Taibi, “writing mortgages on the backs of napkins to cocktail waitresses and ex-cons carrying five bucks and a Snickers bar.”

Yet even that hallowed Canadian restraint appears to have all but vanished in the current economic climate. Stories abound of young couples with combined incomes barely higher than that of a Toronto garbage worker getting approved for zero-down loans of six or seven-times their annual paycheques. But to twist an old riddle, if a loan is pre-approved but it isn’t used to buy a $700,000 tear-down, does it even exist? As Japanese bankers learned in the 1990s during that country’s “lost decade,” banks can approve all the risky, half-cocked loans that the want, but they still need the home buyers to sign off on them. The reckless abandon with which Canadian banks are approving loans these days isn’t the reason why Canadians continue to dive head first into the increasingly shallow end of the Canadian real-estate market. It might get them onto the pool deck, but what’s making them take the leap is the relationship that most of them have with the idea of home ownership, one that has all the characteristics of a classic Ponzi scheme.

With the collapse of Bernie Madoff’s empire and the bizarre spectacle of Montreal fraudster Earl Jones, Ponzi schemes have been all over the news in recent months, and while the real estate market isn’t a Ponzi scheme per se, it does bear some striking similarities. Where traditional Ponzi schemes depend upon a relationship of trust created by a charismatic personality, Canadians have instead invested that trust in their homes and the identity associated with owning them. For example, the position of homeowner, once not much different than that of “blender owner,” has become an exalted one in our culture, while the owned home has evolved from a building with a bed into an unambiguous marker of success and status. The quest for home ownership has become so universal, and so feverishly pursued, that one almost expects “Peace, order, and granite countertops” to be installed as Canada’s new guiding principle.

As with other Ponzi schemes, the relationship between Canadians and home ownership is about making money, preferably of the easy variety. To that end, the most seductive enticement that the scheme’s practitioners provide prospective clients with is the notion that renting constitutes “throwing away” money. Nearly as attractive is the idea that the value of real estate rises inexorably—an idea that its recent recovery in the face of a vicious global recession appears to validate.

As with every Ponzi scheme, the investors are in up to their eyeballs, as Canadians have on average more than 80% of their wealth tied up in their homes. This is a dangerously high figure for any asset class, but as with every Ponzi scheme that risk is supposedly mitigated by a guarantee of safe and steady returns. But like all Ponzi schemes, the promise of a risk-free investment that delivers easy and exorbitant returns is a carefully constructed fiction. Its architects, that familiar combination of politicians, bankers, and industry operatives, have worked hard to transform a rational choice into a universal aspiration. With governments creating various incentives and programs that encourage ownership, the banks providing the easy credit, and the industry spokespeople relentlessly spinning the facts and figures—ones that they usually create and distribute themselves—they have managed to make home ownership look like a leap that only a self-destructive idiot wouldn’t take.

The disdain with which the home ownership narrative and those who push it reserve for those who refuse to conform to its values reveals the depths and dangers of the deception that is at its core. In our ownership-addled culture, those who rent by choice are regarded in the same way as a self-identified communist might have been 25 years ago: an eccentric figure whose views would be subject to ridicule if they weren’t so obviously ridiculous.

Yet, as former MP turned author and real estate blogger Garth Turner points out, “the financial goal is not to have a giant house making people think you’re wealthy,” but instead to be wealthy, and owning a home frequently interferes with that objective. Renting, for example, is often a prudent economic choice. Prospective buyers who have bought the industry line that renting is an unjustifiable waste of resources rarely stop to consider the money that they “throw away” on the costs associated with owning a home. They overlook the interest payments they make to their bank on their mortgage, which on the overleveraged, lowest-payment-possible loan that has become so popular these days often exceed the value of the home itself. That’s not all, either, as there are the thousands of dollars that home owners must spend each year on property taxes, insurance, condo fees, and regular maintenance, costs of home ownership that routinely get overlooked by over-anxious buyers.

Those tidy rent vs. own calculations that banks and real estate agents use to sell potential buyers on the myth that renting constitutes an unnecessary waste also neglect to mention that owners will be lucky to see fifty cents on every dollar they invest in renovations when it comes time to sell their home, or that they’ll have to set aside 4 percent from the proceeds of their sale to pay their real estate fees. Moreover, only the savviest buyer remembers to include the opportunity cost of having their money tied up in real estate in their calculations rather than invested in the market. In the absence of a significant down payment—25 per cent, at a minimum—the monthly cost of owning a home can be double or more that of renting one.

The notion that their homes will increase in value in perpetuity is equally flawed. As anybody who survived the housing crashes of the early 1980s and 1990s remembers, to say nothing of the debacle that continues to unfold in real-time in the United States, real-estate can go down, and when it does the ride is rarely a smooth one. Meanwhile, even in the best of conditions, real estate can be a dubious financial proposition. Despite the remarkable run-up in prices over the last decade in Canada’s hottest market, if you bought a home in 1992, at the tail end of the last significant correction, UBC’s Centre for Urban Economics and Real Estate’s calculations [PDF link] indicate that you would have only seen the inflation-adjusted value of your home rise by an annual rate of 5.3 percent, barely better than the return you might see on a GIC. There’s a reason why people used to routinely refer to houses as “money pits.”

Given that it has yet to collapse in on itself in the face of a recession that has bankrupted the domestic automobile industry, put hundreds of thousands of people out of work, and forced governments around the world to intervene in the economy in ways that we haven’t seen since the 1930s, it’s fair to wonder if the real estate market has managed to transcend the laws of logic and reason and will rise forever, divorced from trivial concerns like jobs, affordability, or even plain old common sense. Yet as Bernie Madoff demonstrated, even the most elaborate and well-supported Ponzi schemes are ultimately destined to fail. Their collapse is a matter of when, not if, and although Canadian home owners have the banks, the government, and an entire industry of consultants, brokers, and agents working to maintain the illusion in which they are all so heavily invested, their time will come. As with all Ponzi schemes, when that time does come it will be those who bought into the lie most earnestly who will suffer the most. The central bankers, the slick developers, or the elected officials who abet them will escape with no more than a few superficial scratches, while the young couple that just recently signed a zero-down mortgage at 2.5 per cent on a $500,000 house and will have to spend the rest of their thirties eating Kraft Dinner and enjoying romantic nights out at the public library when interest rates naturally rebound to more normal levels, their monthly payments balloon, and their dream home becomes a liability. For them and the thousands of other Canadians who are undercapitalized, overleveraged, or otherwise unsuited for the challenges of home ownership, the vaunted dream of real estate will become a nightmare from which they cannot escape.

The good news, if there is any in all this, is that the eventual collapse of the Canadian real estate Ponzi scheme may return the market to a more natural point of equilibrium. With it, the kind of near-insane behaviour associated with real estate transactions that have become commonplace might again begin to look as crazy as they truly are. People might stop engaging in ludicrous bidding wars for clapboard tear downs in Leslieville and East Vancouver, or spending half a million dollars on a condominium that is barely bigger than a bus shelter and is located in a neighbourhood with more crack houses than coffee shops. If we’re truly lucky, we might even get back to a point where people buy homes because they can afford them, not because they feel they can’t afford not to. We have a long way to go to get there, though, and the ride down isn’t going to be much fun for any of us.