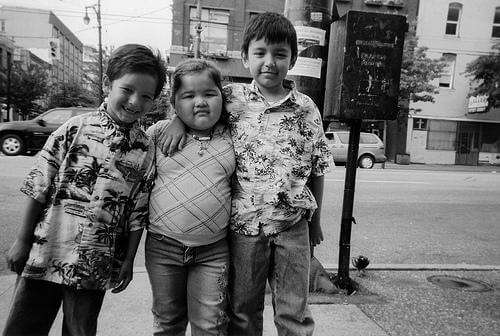 The Hope in Shadows contest is changing perceptions of Vancouver’s Downtown Eastside (DTES) by giving residents an opportunity to document their stories through photographs.

This year marks the seventh annual Hope in Shadows photography contest. Every June, around 200 free disposable cameras are distributed to DTES residents. Contestants are allotted three days to take pictures, which are then submitted to, and judged by, a panel of professionals and peers. This year entrants submitted more than 4,000 black-and-white images. The winning photographs are exhibited throughout the province, and a selection of the best pictures appear in the annual Hope in Shadows calendar. On October 12, the winner of the 2010 Hope in Shadows — Portraits of the Downtown Eastside was announced to be Steven May for his photograph “Daphne’s Grandchildren.”

While the media tends to portray the DTES as a hotbed of criminality, drugs and prostitution, the Hope and Shadows contest cultivates a different image. The DTES, as portrayed by its own residents, is home to a vibrant and caring community filled with families, children, and individuals who have hopes, stories and dreams – and face struggles and hardship – just like all human beings.

By giving residents an opportunity to tell their stories, the Hope and Shadows project has generated a greater understanding of the DTES and empowered its residents.

Furthermore, by allowing homeless and low-income street vendors to sell the calendars, and keep $10 out of every $20 calendar sold, Hope and Shadows also provides a viable employment opportunity to those who need it most. Last year street vendors generated over $130,000 in personal earnings in this manner. As the Hope in Shadows Director Paul Ryan puts it, “While the photos, and stories that describe them, are positive portrayals of the people who live in the community, the project also creates accessible employment opportunities for local residents.”

16,000 calendars have been ordered for this year. To order online visit the Hope in Shadows website.

Here’s a Flickr slideshow of the images in the 2010 Hope in Shadows exhibition: