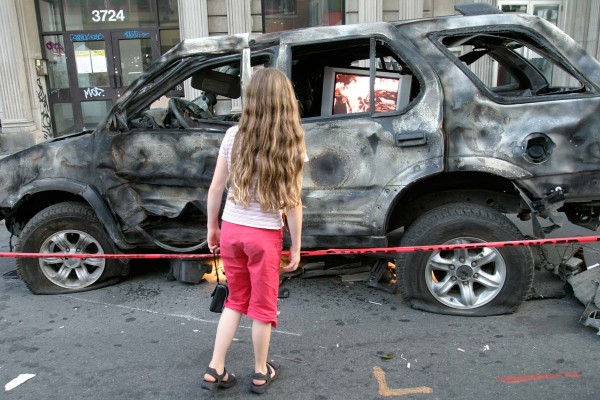 Socially Acceptable Acts of Terrorism: that last word seems to just hang in the air. These days, not many organizations would choose to use the “T” word. But when Montreal’s public art duo ATSA (the group’s French acronym) first hit the streets over a decade ago, terrorism was a much more debatable concept. 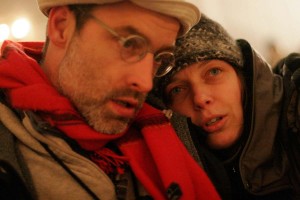 “The word was less concrete [then]. Terrorism was not in our North American vocabulary,” explains Annie Roy, who, along with common-law partner Pierre Allard, makes up ATSA. “Of course, it is terrorism as a concept — art that wants to explode in the public field because it has demands.”

Last fall, the pair chose to celebrate 10 years of creating art that does just that. In commemoration, 10 prominent Montreal artists and activists put together When Art Takes Action, a retrospective book on ATSA. “Not only have they maintained their creativity, but the have also managed to stay innovative, bringing forward new ideas and old issues in a new way,” says Laure Waridel, a Montreal-based environmentalist and co-author of the retrospective.

Soon after meeting in the fall of 1997, Roy, a dancer, and Allard, an artist, created their first installation: the Banque à Bas (literally the Sock Bank, but also “Down with the Bank”), a giant cardboard ATM that distributed socks in winter to Montreal’s homeless. They were inspired to create it after hearing how banks were making billions in profits while a Montreal shelter struggled to find enough socks for its users.

Poverty has been a central theme of ATSA’s work ever since, and is quite evident in their most well-known work, State of Emergency, a five-day, downtown Montreal encampment they have run since 1998. Originally a symbolic winter refugee camp for Montreal’s homeless, State of Emergency now involves more than 400 volunteers and features a range of resources for Montreal’s street population, including free meals cooked by top Montreal chefs, outreach groups and medical aid. The goal has also been to try and break down the stereotypes that divide those living on and off the streets.

In 2008, State of Emergency was recognized by Les Arts et la Ville (Arts and the City), an organization representing 350 Quebec municipalities, with the 2008 Citizen’s Culture prize. Says Roy: “It was a wonderful award to receive. We don’t do this work for the recognition, but it is motivating to know that others are taking notice.”

ATSA have also grabbed attention outside Quebec. Starting in 2003 they toured Canadian cities with ATTACK: an SUV that appeared to have been hit by a roadside bomb and contained an audio/ video installation showing footage of war and environmental degradation.

The duo hopes to hit the road once again in 2009 with Change, an installation they put together to celebrate ATSA’s ten years. Taking on the form of a corner store, the installation was named for its double meaning — changing the world, but also for the change in your pockets. Walking into the small, white-washed shop is a trip down ATSA’s memory lane: on sale are bits of warning tape in frames, large prints of curious citizens peering at ATTACK, framed blankets from State of Emergency.

Meanwhile, Roy says ATSA will continue its “balancing act” between art and activism, trying to keep the spark alive. And she is confident that even after 10 years, a lot more can be expected out of the pair.

“It’s a life project. We don’t make the difference between our family life and our ATSA life anymore. It’s a family thing. So if it stops, it stops a lot of things. So it’s not really an option.”

A slideshow of ATSA’s work over the years: