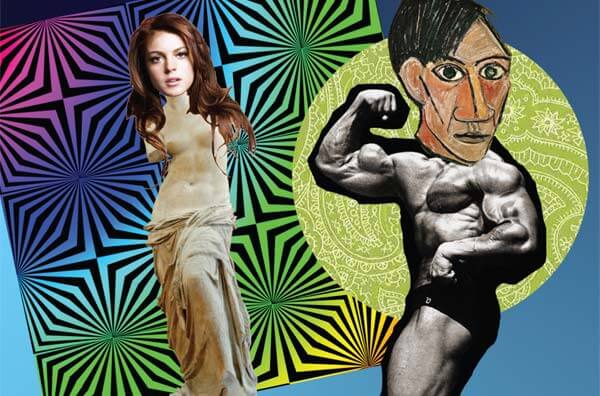 Tumblr reflects contemporary pop culture: not so much like blogging, more like collage. Illustration by Dave Donald.

[Editor’s note: If you’re curious, This Magazine has its own Tumblr blog. Visit quote.this.org]

I have never left a cinema with as big a grin on my face as when I watched the spectacularly awful Transformers: Revenge of the Fallen. Every complaint I had heard was spot-on—that the acting was abysmal, the plot incomprehensible, the camerawork confusing and hyperkinetic—and so I was as stunned as anyone when, at the end of the film, I turned to my brother and said, “That may have been the greatest thing I have ever seen.”

Maybe I shouldn’t have been surprised. When I read a blistering review of the film on sci-fi site io9, I assumed the author was being tongue-in-cheek when he suggested Michael Bay had finally made an art movie, its genius that it was “like 20 summer movies, with unrelated storylines, smushed together into one crazy whole.” Turns out there was a kernel of truth in there: the insane, glorious mess that is Transformers 2 is not only a culmination of 21st-century pop culture, it’s also a sign of where our new web-centric world is taking us.

Lately, I’ve been spending a lot of time on Tumblr, a site that, like Transformers 2, may very well be the future of pop culture. On the surface, Tumblr is like any other free blogging service: you log in, add text or photos or links, and, presto, you have yourself a blog.

But Tumblr is a stripped-down, sped-up kind of blog, and in practice many people are using it for something quite apart from blogging. More often, it’s closer to collage. Unlike the text-heavy feel of a traditional blog, the ease and speed with which users can post their own material and quickly republish others’ means Tumblrs are often head-spinning catalogues of media, a mind-bending mishmash of images, videos, and words.

Take a popular, prolific Tumblr called— and I quote—“holy shit, it’s a fucking rainbow.” Day after day, the site gathers an overwhelming array of, well, stuff: hazy photography of models in sundresses; arty experiments in design and typefaces; literary quotes and other fragments; and the occasional link to a video, maybe accompanied by effusive comments about the “goddess-like hotness” of Emily Haines. Though there’s no explicit theme to this and many other Tumblrs, it’s still tied together by what you might call a vaguely 21st century vibe: aesthetics come first, overlaying both a fascination with the future and nostalgia for the past.

All the while, the site careens back and forth between ironic detachment and a profound respect for art and beauty, posting goofy comics just before or after heartbreakingly gorgeous experimental photography. Nothing captures this “Am I serious or not?” tone better than the site’s deadpan name. It’s as if its author can’t decide whether this Tumblr comes with a wry smirk, a friendly smile, or both.

And though the thousands of Tumblrs out there don’t share a focus, many do share this blank, post-ironic feel. From absurd art experiments (photos of people with their heads in freezers), to enthusiastic single-topic blogs to viral sites (such as the popular “Look at This Fucking Hipster,” which features annotated photos of 20-something fashion disasters), Tumblr is home to a strand of culture that resists neat packaging or easy explanation. It’s this love of value-free pastiche that makes the genre so interesting. In the last century, popular culture always put things together for us, into stories or artistic wholes; neat, recognizable packages like superheroes or formulaic soap operas.

Tumblr does the opposite. It throws interpretation to the wind and embraces every cliché about postmodernism you’ve ever heard, collapsing the difference between high and low, celebrating aesthetics and kitsch, and, most of all, revelling in the death of the idea that there is only one way of looking at the world. In an odd way, this approach puts Tumblr at the bleeding edge of pop. You find a similar approach in the kaleidoscopic riot of mash-up artist Girl Talk or in the dark ambiguity of cult TV series like Arrested Development. And yes, you also found it this summer in Transformers 2, with its stunning replacement of logic and narrative coherence with expensive, disjointed scenes of robots doing…something.

This self-conscious refusal to judge has been slowly filtering its way through pop culture for decades, but it’s proliferating rapidly on the web. Trend-aggregation site Buzzfeed places links to Barack Obama’s speeches on health care next to posts informing readers that Harry Potter’s Emma Watson is “now legal.” Everything is fair game, and at the end of the day, that isn’t as scary as it seems.

Spend a lot of time on the Tumblr-ized web and you grow accustomed to its unending torrent of images and ideas, eventually just letting it all flow over you. You take serious things seriously; get choked up when you see something beautiful; and take the fluff for what it is. And if that simple approach to pop culture is our future, I look forward to its arrival.