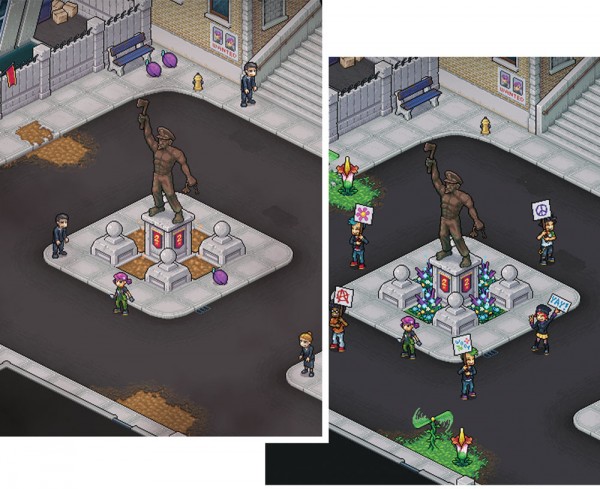 Can a gardening video game change the world for the better?

In a medium that features an overwhelming focus on war-themed shoot-’em-ups, a video game about social change through gardening is a definite change of pace. And if the duo behind Guerrilla Gardening have their way, it will also inspire players to raise a trowel and start sowing the seeds of revolution themselves.

In development for nearly two years, Guerrilla Gardening features a unique mix of stealth and puzzle gameplay. Your goal is to overthrow an evil dictatorship by inspiring citizens to make a change. To do this, you’ll have to plant flowers around government propaganda to make the citizens happy, while avoiding the ever-vigilant police.

According to artist-designer Miguel Sternberg, the idea came from a blog post about the burgeoning guerrilla gardening movement.

“I had already sort of been thinking about games that were about protest and social change and street art,” he explains. “Then I read about guerrilla gardening and I was like, ‘Oh, wait, this basically takes all of the things I’ve been sketching about in my notebook as ideas and lets me put them all into one game.’”

“Like most indie developers, we’re doing it for ourselves, making the sort of game we’d like to play,” says Sternberg. “But I also think that along with hitting the hardcore indie gaming set, it will also hit people who are interested in the theme: the fact that it’s a gardening game.”

As for when Guerrilla Gardening will finally be released, the team says simply, “When it’s done.”