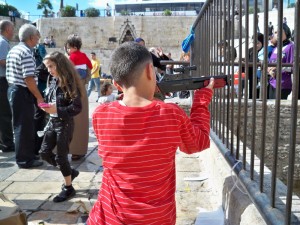 In Israel, terrorism breeds hatred that passes from one generation to the next. Photo: Laura Kusisto

It was a great moment for the Conservatives’ law and order agenda, and a terrible one for justice. Public Safety Minister Peter Van Loan recently announced new anti-terrorism legislation that would allow Canadian victims of terrorist attacks on both domestic and foreign soil to sue individual terrorists, terrorist organizations, or even countries accused of supporting terrorism.

The last of these has raised a flurry of controversy. Critics say giving Canadians a virtually unparalleled ability to launch suits against foreign governments could alienate allies without actually aiding the fight against terrorism. A similar provision has already proven problematic in the U.S. — the only country with similar legislation currently in place — as suits have been directed (and in several cases succeeded) against a motley crew of friends and allies that include North Korea, Iran and Israel. Just a few days before Van Loan’s announcement, the Obama justice department stepped in requesting immunity for Saudi Arabia, fearing a successful lawsuit could enflame tensions.

Van Loan claims to have addressed this because governments can only be sued if they are on what he promises will be a very short list of “state sponsors of terrorism.” But what Van Loan has not addressed is whether any such protection will be afforded the Palestinian Liberation Organization, which runs the Palestinian Authority in the West Bank. The PA is recognized by the Canadian government only as the “legitimate representative of Palestinian interests in the Middle East”; not as a sovereign government. This leaves the PLO — already teetering on the brink of bankruptcy — without protection under the legislation and thus vulnerable to expensive lawsuits from Canadians injured in terrorist attacks in Israel.

In the U.S. at least two such suits have been filed against the PLO and PA. One is still in the court system, and the other was successful, with $192.7 million in damages awarded. If the plaintiffs ever collect, there is no question that this amount would completely bankrupt the PLO. The PLO’s control over terrorists in the West Bank is notably weak, and even PLO members have committed numerous acts of violence and the organization’s own funds been diverted for appalling purposes. Without yet knowing what the standard of proof will be under the Canadian legislation, it is likely that damages could also number in the hundreds of millions.

Of course, in reality the PLO will probably survive because there is no way to guarantee the plaintiffs will ever see a penny of this money. Only about 2 percent of the damages that have been assessed in cases under the U.S. legislation have actually been paid to victims and their families. Instead, Van Loan argues the power of such suits is largely symbolic. It is a chance for Canadians “to seek justice that might otherwise have been denied them.” But even as symbolism, this is absolutely the wrong message for Canada to send.

In Israel terrorism is a scab that never heals. At funerals for victims on both sides, the faces of relatives are still contorted with grief when they begin to harden with anger and the readiness for revenge. These lawsuits are said to be about justice, but there is no justice in a lawsuit that drags on for years with no possibility of just compensation. There is only public humiliation, and the generations of anger it ensures.

No one doubts the unjustifiable horrors committed by terrorists in the West Bank, or that the Canadian government should do everything in its power to force the PLO to crack down on terrorist cells and rogue members in its own fold. But this kind of public shaming only threatens to undercut delicate diplomatic negotiations and harm by far the best — if imperfect — alternative for good government in the West Bank. It will drag the PLO onto the international stage for years to come, setting an example of revenge and humiliation that has nothing to do with the Canadian justice I know and want the world to see.