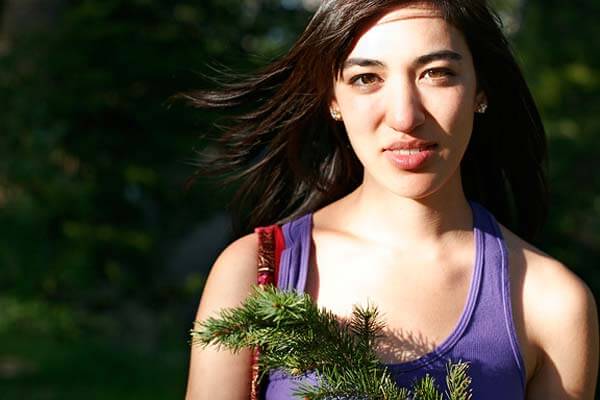 Lauryn Drainie: advocating for small island nations whose voices have been lost in the climate fight

[Editor’s note: Every month, Eco-Chamber profiles an environmental activist from Canada or abroad, called “Eco-Warriors.” These profiles are a collection of stories Emily is working on for a book called The Next Eco-Warriors.]

In a matter of 10 months, she went from eco-nobody to climate justice crusader. Attempting to put island nations back on the map of our climate future. She shows that it’s not just the scientists, politicians and eco-celebs like Al Gore who are making waves.

As a new activist in the ‘eco-warrior’ world, Lauryn Drainie, a 21-year-old Japanese-Canadian, fell into climate justice work unexpectedly. Though she had no in-depth knowledge or background in the climate cause, she was chosen to be a Canadian youth delegate at the Poznan, Poland climate conference last December . What happened there changed her life.

“At the negotiations, I was shocked at the extent to which Small Island Developing States (SIDS) were marginalized,” says Drainie.

It was in Poznan that she realized the problem with the 2°C-degree global temperature rise target that is deemed “acceptable” by many climate experts. That target, while it would help save many inland ecologies, would leave many of the SIDS uninhabitable as the sea level rises. These already marginalized groups are on the brink of literally losing their homelands, their livelihoods, their cultures and languages as climate refugees.

This is what economists call an “opportunity cost.” The opportunity: for us in the well-to-do West to leave some margin of error and gradually reduce our emissions over the next few decades. The cost: up to 130 million people becoming climate refuges in the next 50 years. The scientific consensus, numerous environmental groups and wealthy governments around the world have all decided this is a cost worth paying – but most of those people won’t be affected nearly as quickly as SIDS.

Drainie says this 2°C degree target is mostly deemed acceptable because the SIDS and other developing countries have little clout at these climate talks. In her accounts of Poznan, she discovered that SIDS leaders were provided cheap accommodations with no telephones, TVs or even e-mail access, while the higher-ups were given penthouses with all the amenities. The SIDS were almost literally in the dark, unable to communicate the threat they face. 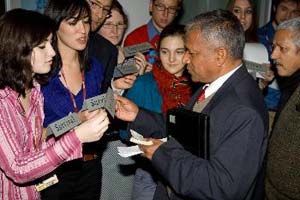 Lauryn Drainie and other Youth Delegates offers a placard to the Environment Minister of Nepal, while blocking the entrance to the negotiations room. Photo Credit: Robert van Waarden

To make the voiceless heard at the conference, the Youth Coalition, which included Drainie, blocked the doors of the conference house on day five, forcing country representatives to talk with them. In that moment, they negotiated with these representatives to sign on to a Survival Principle in the Post-2012 climate treaty, a principle that safeguards the survival of all countries and all peoples.

Ninety countries signed on and the Youth Coalition received supporters from such prominent individuals as Nobel Peace Prize winner Wangari Maathai. The next morning, they found that the newly released Ministerial Summary Document on Shared Vision had the Survival Principle included. They had single-handedly put the marginalized back at the discussion table.

Today, Drainie is coordinating a climate justice speaking tour across Canada with SIDS community leaders, giving countless speeches herself on the plight of SIDS and is helping put together a book celebrating these vibrant cultures that may be forever lost due to climate change. The fight is still far from being won for SIDS and other marginalized groups, but this newbie eco-warrior is helping climate leaders hear those who need it most urgently.