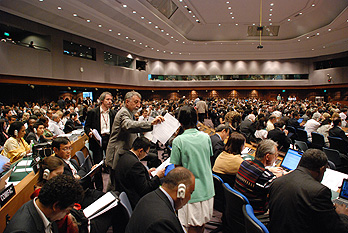 Delegates to the Bangkok climate negotiations in a plenary session. Photo courtesy UNFCCC.

Canada’s delegation to the latest round of global climate agreement negotiations put on quite the show a few days ago, suggesting that perhaps it’s time to scrap the Kyoto Accord and start over. The reviews are in, and the critics didn’t like it. In fact, they walked out just after the opening number. The Canadian Press reports:

The delegates discussed whether all or parts of Kyoto should end up in the new agreement, according to notes taken by a delegate from a developing nation as well as one of the South African negotiators.

The developing countries want a new climate deal to complement Kyoto, but Canadian officials told the room they would rather replace Kyoto with one agreement, according to the meeting notes. […]

At that point, the South African delegation stood up and led the Group of 77 developing nations—except for a group of small island states—out of the room.

Aw, snap! That hurts. Not that we don’t deserve it, since in climate change and global warming, Canada is increasingly part of the problem, not part of the solution. And other countries are starting to notice.