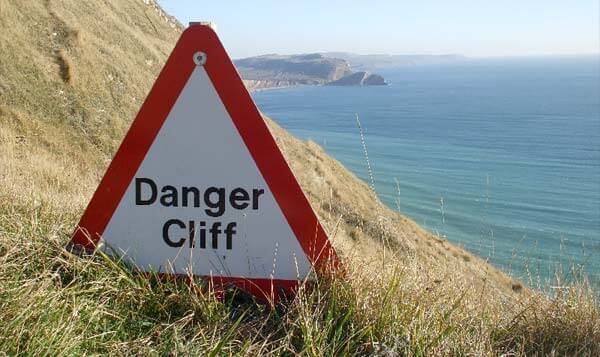 We can read the signs, but can we stop from falling off the edge? Photo by Panoramio user jk1812.

It’s as if we’re in a car that is blazing along. We are on cruise control as we hit a crossroads. We desperately need to make a turn. But instead of slowing down or making shifts in the wheel, we’re full-speed ahead. It’s a diverse group of us in the car but all we’re doing is talking, arguing and fighting amongst ourselves — no one is making the turn. And what lies ahead of us is the edge of a cliff.

This is the situation in which we find ourselves as the Copenhagen climate conference approaches, the next global climate-pact to succeed the Kyoto Protocol. The recent talk in Barcelona, the last climate talk before Copenhagen, seems to have locked us into this failed course for the cliff’s edge. Instead of meaningful progress, world leaders are backtracking, all the way to the failed Kyoto.

Copenhagen already seems like a repeat of the Kyoto debacle, before it has even started: weak emissions targets, divisions between the Global North and the Global South and false solutions once again.

Where there was once hope for the December summit, with the United States showing strong climate leadership (finally, after the 8 year Bush inaction), there is now cynicism. Domestically, the U.S. is thus far politically gridlocked on the issue. Despite any efforts by Obama, the U.S. climate bill is inching its way through the Senate, now likely to be debated after Copenhagen.

Internationally, diplomats at Barcelona now believe it will be politically impossible to have a legally binding agreement at the end of Copenhagen because of disputes by world leaders in the preceding talks, disputes including emission targets and finance to developing nations. Which makes it increasingly likely that we will have to settle for a “politically binding” — not legally binding — agreement in December.

“I don’t think we can get a legally binding agreement by Copenhagen,” said Yvo de Boer, the UN director of the talks, in a conference in Barcelona. “I think that we can get that within a year after Copenhagen.”

But will a 2010 pact really make any difference?

World leaders have had two years, since Bali 2008, to finalize this agreement and still we are not any closer. What will more time provide, other than more talk?

As Jasmeet Sidhu, the Toronto Star climate blogger points out: “A ‘politically binding deal’ is the equivalent to a politician’s promise,” it means nothing. So it seems like it will be just more talk.

Even if the political disputes can be worked out by the end of the Copenhagen summit and it’s a step in the right direction towards climate progress (despite being only politically binding), it now looks like it will take 6 months to a year for an agreement to become legally binding, and several more years to be ratified. Meanwhile, we are running out of time.

Conservative science tells us we have 10 to 15 years to peak and curb emissions if we want to stabilize the climate. Every year we waste, we are getting closer to that cliff.

And let’s not forgot what many are too polite to mention: even “legally binding,” internationally, means squat. Sure, it looks good on paper, but there are no climate cops to punish those who ignore their obligations (i.e., Canada, which did just that with Kyoto). Politically or legally binding, it’s toothless.

Not to mention, many argue that even the most ambitious targets being discussed by world leaders are outdated, some calling for reductions to 60-80% of our current emissions by 2020 (instead of 20-40% of current emissions).

“We should not rely on these agreements to save civilization,” he says in the Guardian. Instead, he advocates for “Plan B,” a swift civil global mobilization to create a green economy.

“The answer is a wartime mobilization, not unlike the US effort on the country’s entry into the second world war, when it restructured its industrial economy not in a matter of decades or years, but in a matter of months.”

Politicians follow what the public wants. It is our will — a united, strong and organized movement — that can create, essentially, a “World War Three” to save the planet.