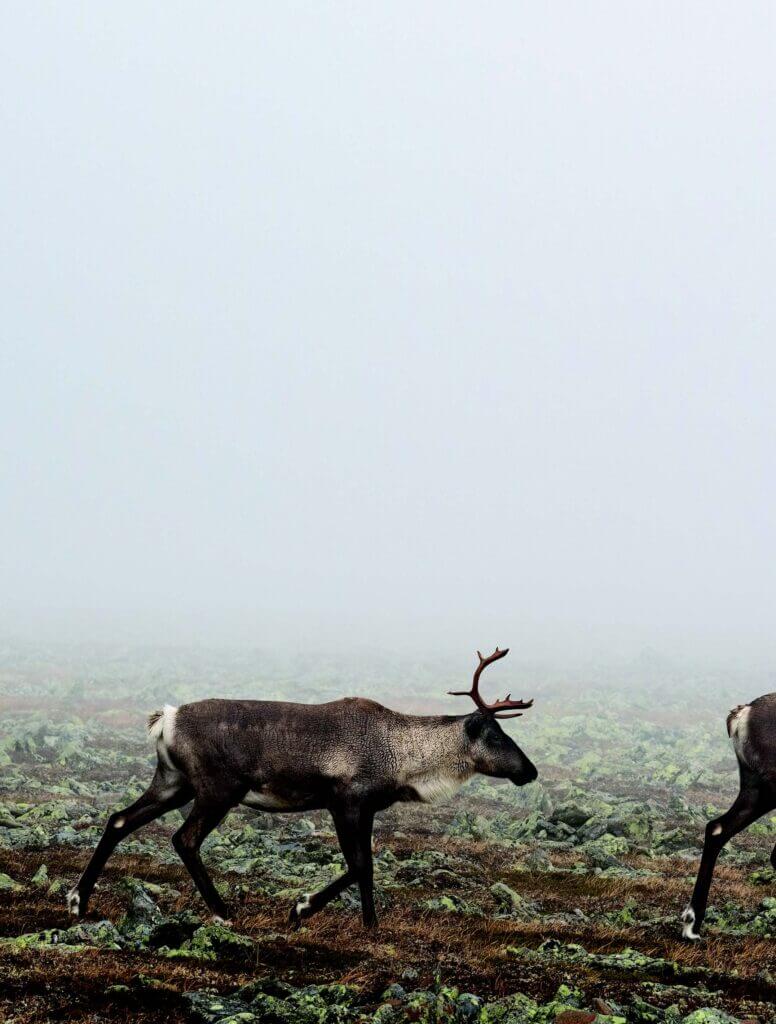 Every Canadian knows the caribou. The animal can be found on the back of the quarter, millions of which are circulated every year. Yet, the iconic species is on the brink of extinction, and, according to ecologists and activists, not much is being done to stop that.

Across Canada, caribou are declining as a result of forestry, oil and gas activities, mining, and road-building. And it’s not just the caribou that we’re losing. Because they have such specific habitat conditions, woodland caribou are considered an “umbrella species,” which means their well-being provides important insight into the well-being of their environment. Protecting the caribou means protecting the habitat of other species, and their health is therefore an indicator for the health of their forests as a whole.

While the species’ numbers have been dwindling throughout the country, the debate surrounding the caribou has been growing increasingly heated in Quebec. Over the last few months, the declining situation of caribou in the province has resulted in growing backlash against a lack of action, criticism of industry lobbies, and lawsuits against the provincial government. On December 9, 2021, the Ministère des Forêts, de la Faune et des Parcs (MFFP) released its latest inventory numbers for herds in the Gaspésie, Manicouagan, and Charlevoix regions of Quebec. At the time of the report, there were only 17 forest caribou left in Charlevoix, only one of which was a fawn. Just 14 years ago, that number was over 80. And in Gaspésie, where the last native herd in southern Quebec is found, only 32 to 36 mountain caribou remain. Both forest and mountain caribou are subtypes of woodland caribou, the only type of caribou found in Quebec.

Caribou need old-growth forests to survive. Human development, especially forestry activity such as commercial logging, has fractured and destroyed much of its habitat. In Charlevoix, for example, as much as 89 percent of the caribou’s habitat has been disturbed. These younger forests attract moose that eat new plant growth, which, in turn, brings in predators such as wolves. While the moose is a wolf’s natural prey, a caribou is an easier catch. This is further facilitated by the creation of logging roads and hiking trails, which allow predators to move more freely across the caribou’s habitat.

“The scientific community agrees that, ultimately, the cause of the decline of the majority of the forest and woodland caribou populations is the management of our forests,” explains Marianne Caouette, project manager of Protected Areas and Biodiversity at Nature Québec. “It’s really the harvesting of wood that removes old growth from the forests and will create environments that are favourable to predators, such as wolves or coyotes.”

After delaying the unveiling of its strategy against the decline of the woodland caribou in 2019, François Legault’s Coalition Avenir Québec (CAQ) government once again pushed the plan’s release date from 2021 to 2023, and in the meantime created an independent commission. The MFFP stated in a press release that the commission will be headed by Nancy Gélinas, dean of the faculty of forestry, geography, and geomatics at Université Laval and a researcher in forest economics, rather than any ecologists or conservation experts.

In a press conference held on March 17, 2022, Gélinas stated that the goal of the commission is not to look at the reasons of the caribou’s decline, but “to add the layer of socio-economic impacts.” She says she believes that Quebec must make a choice that considers the protection of the caribou and the consequences that such protection would have on the regions outside of metropolitan areas, the industry, and the treasury.

Marie-Hélène Ouellet D’Amours, an environmental and sustainable development advisor for the Conseil régional de l’environnement du Bas-Saint-Laurent (CREBSL), considers the questions that comprise the independent commission’s consultation biased toward minimizing economic impacts. Currently, she believes, the ministry considers the environment, society, and the economy as separate entities that talk to each other. “The realistic way of looking at it would be to see the environment as supporting society and the economy,” she says. “There is a kind of conceptualization of things that is different from a real understanding of sustainable development, and I think that’s where the problem is.”

In the meantime, the government is capturing and confining both the Charlevoix and Gaspésie herds, a relatively new practice in Quebec. The capture of the Charlevoix herd has already been completed, and its members will be held in captivity indefinitely, making it the second herd in Quebec after that of Val d’Or to be held in captivity, which has been enclosed since 2020. The capture of the Gaspésie herd has been postponed to next year, but the plan involves enclosing its pregnant females and releasing them a few months after they have given birth to their fawns. Predators who approach the animals can be trapped and killed.

According to the ministry, the enclosure is a temporary solution that needs to be implemented to stop the decline of these isolated populations until the government’s caribou strategy is adopted in 2023. Many environmentalists, however, argue that the government is merely buying time. “It’s like putting them on life support,” says Caouette.

Ouellet D’Amours believes that culling predators and caribou enclosures would not have been necessary if the government had acted earlier. “It’s a measure that is being taken to make up for decades of inaction.” And it’s not without risk. When caribou are put in enclosures, explains Steeve Côté, a professor of biology and ecologist at the Université Laval, they don’t learn how to survive in the wild. Côté says animals born in these facilities won’t be used to finding proper habitat for themselves. They’ll also be naive toward predators, he adds, as they won’t have encountered any while in captivity. Côté explains that predator control and enclosures will only be effective if the caribou’s habitat is protected and restored while they’re in pens. Otherwise, they’ll simply be re-entering a dangerous environment that is still conducive to predators.

For Louis Lesage, Director of the office of Nionwentsïo of the Huron-Wendat Nation in Wendake, Quebec, the decision is emblematic of the government’s lack of consultation with Indigenous communities regarding caribou protection. “The government, without consulting us, without asking for our opinion, pulled this solution out of a magic hat and unilaterally put our caribou in pens,” says Lesage. The office has been collaborating with the MFFP for the last seven years on re-establishing the local caribou population, but it hasn’t always been easy.

Indigenous communities across Turtle Island have strong ties to the caribou. In Wendake, before their populations began dwindling, caribou were used for food, clothing, and artisanal production. “Caribou were essential to Huron-Wendat arts and culture,” says Lesage. Their leather, for instance, was used to make coats, and their hooves were used to create wall pockets, a speciality of the Huron-Wendat that involved decorating the hoof and using it as a support for different objects.

Yet Indigenous Peoples have largely been left out of the conservation process. In an opinion piece in the Narwhal, Adrienne Jérôme, Chief of the Lac Simon First Nation, and Christy Ferguson, executive director of Greenpeace Canada, criticize the provincial government’s response: “Not only the lack of action for caribou recovery, but the lack of real dialogue or meaningful efforts to listen to Indigenous perspectives is in itself a form of environmental racism. Through the inaction and inertia of the Government of Quebec, the ancestral rights of Indigenous Peoples have been and are still widely violated.”

Some Innu communities have also begun taking legal action against the Quebec government, stating that the government has failed to adequately consult with Indigenous Peoples regarding caribou protection. The Essipit and Mashteuiatsh First Nations filed a motion with the Quebec Superior Court on February 24, 2022, writing in a statement that they “demand respect for [their] Aboriginal rights and immediate measures to protect the caribou and its habitat, based on Innu and scientific knowledge.” The following week, the Canadian Press reported that Innu Council of Pessamit’s Chief, Jean-Marie Vollant, said that he’s willing to follow suit to enforce action.

The province can look to British Columbia, where a caribou herd bordering on extinction tripled its numbers in less than a decade, thanks to the work of the Saulteau and West Moberly First Nations. While their community-led effort included putting caribou in enclosures and culling wolves, it most importantly also involved protecting the herd’s habitat. In 2020, the federal government and British Columbia agreed to protect and restore 8,100 square kilometres of natural caribou habitat in the area, halting a planned resource extraction project.

The Huron-Wendat Nation worked on the creation of the Ya’nienhonhndeh protected area for over a decade and finally reached a partnership with the provincial government in 2021. The Legault government agreed to protect 300 square kilometers last June, and up to 750 square kilometers over the span of the pilot project. Ya’nienhonhndeh means “the place where medicinal plants are gathered” in the Wendat language. The protected area will not only help with caribou conservation efforts, but will also protect rare plants, chimney swifts, and other species at risk on the territory. Ya’nienhonhndeh will be one of the rare protected old-growth forests in the province.

The MFFP confirms that habitat loss is a major driver of caribou decline, and states that forestry practices are being adapted by following interim measures aimed at restoring caribou habitat. Yet, in February 2022, the ministry announced a plan to cut trees in an area bordering the caribou’s habitat in Gaspésie as part of a management plan for the recovery of wood affected by the spruce budworm. “It raises real questions about how the ministry thinks about protected species. There’s a mentality that needs to evolve,” says Ouellet D’Amours.

That same month, it was announced that 83 protected area projects in southern Quebec were rejected, amounting to 20,000 square kilometres of land. All of the rejected projects were in territories where the government allows commercial logging. “The forestry industry and the short-term profits it creates are often prioritized over protecting biodiversity in Quebec,” says Caouette. “We’ve seen this in the last few months [with the creation of protected areas]. The industry has a strong lobby in southern Quebec that will ultimately slow down or be an obstacle to the creation of any protected areas in that region.”

In March 2021, an investigative report by CBC/Radio-Canada unveiled just how intensely the MFFP is under the forestry industry’s influence. To attain its goal of preserving 17 percent of its territory in 2020, the government created 34 new protected areas in Northern Quebec, where forests don’t have much commercial value and commercial logging is mainly outlawed. Forestry projects in the southern parts of the province, where the Charlevoix and Gaspésie herds are located, keep being approved. An anonymous source working for the MFFP interviewed by CBC/Radio-Canada claimed that many rejected protected areas in southern Quebec were originally greenlit by officials, but caused concern for the industry.

A shift is needed. Quebec’s economy is still reliant on the forestry industry: it made up 1.6 percent of Quebec’s total GDP in 2019, and thousands of Quebecers are employed as loggers, technicians, field supervisors, and more. “We need to think of the economic development of the regions outside of metropolitan areas in a different way. This is the question that we’re asking ourselves, and that we must ask ourselves as a society,” says Ouellet D’Amours.

For environmentalists like Côté, the outlook for meaningful action by the government is grim. “There’s no reason why the government would [act] now when they haven’t for the last 20 years, even though they knew about [the decline of the caribou]. Everybody knows about it in this country. There’s no desire to do anything,” he says.

In order to make a difference, Ouellet D’Amours believes in the power of citizen action: “Write to your MP, go to public consultations, and stay informed.” She senses that the tides are turning: “People are more and more informed about what’s happening, and are more responsive to our messaging. That gives me hope.”