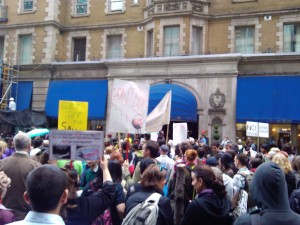 About 200 protesters gathered on King Street today as Enbridge held their annual general meeting inside the King Edward Hotel.

The mass of protesters had congregated on the street to voice their opinions on the proposed Northern Gateway pipeline, which would stretch 1,172 kilometres from Bruderheim, Alta., to the port of Kitimat, B.C. The proposed cost of this venture is in the range of $5.5 billion dollars. The pipeline would transport oil from the tar sands to the west coast for export to a growing Asian market as well as the western United States.

The pipeline would also move through lands which belong to dozens of First Nations groups. A group known as Yinka Dene Alliance, made up of B.C. First Nations, traveled by train across the country for eight long days to arrived in Toronto yesterday. Their goal is to inform people and raise awareness about the damages the Northern Gateway pipeline could cause to the environment and to their homes.

I arrived at the protest, a little damp from the light rain, to see a wide variety of signs and banners raised above the crowed. People were gathered in the middle of the street, chanting “No pipeline, no tankers,” along to the loud beating of drums.

Signs in all capital letters read “SHAME ON ENBRIDGE” and “WATER NOT OIL”—among various other anti-Enbridge slogans. Natalie Guttormsson, who was holding a large yellow sign with the red lettering “RESPECT INDIGENOUS PEOPLES RIGHTS,” said her sign means,  “recognizing that we are living on their land and when they say no to a project it means no.” 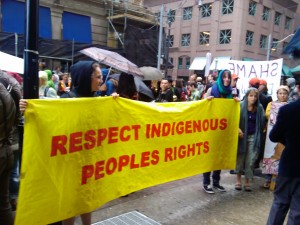 As it began to rain down harder, the people only became louder. “NO TANKERS, NO PIPELINE, NO JUSTICE, NO PEACE,” rose loud above the sounds of the lunch hour traffic. They came to inform and raise awareness and that’s what they did.

I continued to scour the crowd for someone from the Yinka Dene Allience who was able to answer some of my questions. After asking several different people for an interview I met with Ted White, a councillor for the Aamjiwnaang First Nation. “I’m here to support the people in B.C. about the pipeline going through there,” he said.  “We’ve had problems (in Sarnia) with this company there alone.”

Standing with White was Al (who didn’t give his last name) also from the Aamjiwnaang First Nation, a strong silent type, wearing a black hooded sweatshirt and a camo hat. He joined in our conversation: “The problem there hasn’t even been solved yet and they’re starting more problems on the other side of the country” he said. “They have to deal with these problems first.”

Many people at the protest were there to show their support for the Indigenous people in western Canada. A large number of those  I spoke with at the protest were from the Sarnia area, where another Enbridge project is located. According to Toban Black, Enbridge Line 9 crosses water sheds in the area and is connected to industries in Sarnia and Sarnia Lambton. Black is concerned because tar sands bitumen is processed there. “There is a bigger picture that the Northern Gateway struggle is part of,” he said.

Zack Nicholls, who was taking shelter from the rain, stood inside a bus shelter with his four year old son seated in a stroller is also from Sarnia. “I got the four year old with me,” he said. “Generally, I wouldn’t bring him all this way out but I felt it was important to get out and just be part of something big.” There was a real sense of frustration deep within the calming demeanor of his voice.

The Conservative government’s decision to get rid of the environmental assessment will pave the way for a lot more problems to occur, Nicholls added, especially with the Enbridge pipelines.

“In Sarnia there is just a constant barrage of releases from all the different refineries and the government does nothing. Every single time they do nothing,” said Nicholls. “We do stuff in Sarnia but they’re always just such tiny little events. I needed a pick me up. To be here with hundreds of other like minded people.”