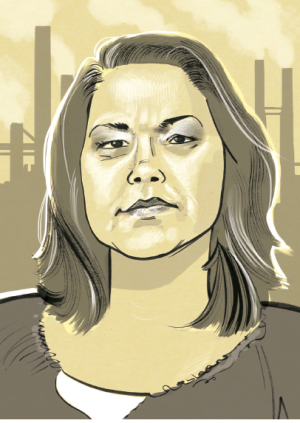 ENVIRONMENTAL ACTIVIST AND RABBLE-ROUSER Ada Lockridge is the recipient of many whispers. Through her work trying to stem the petrochemical pollution surrounding her home of Aamjiwnaang First Nation, she has become equal parts private detective and confessor. Whether it’s a plant worker letting her know about an industrial accident or an apology to Aamjiwnaang for bearing the brunt of the area’s pollution, Lockridge is frequently told things in a hushed voice.

Over the past decade, she has found ways to turn those whispers into a sustained campaign of environmental activism. Her history of getting things done has made her a fixture at community meetings and provided her insider access to CEOs and government officials alike. Whenever she meets someone important she likes to jokingly ask, “Are you sure you want to give me your number? Because I will call you.”

Her latest battle is with the Ontario Ministry of the Environment and oil giant Suncor—and it’s one that will take all of her dogged persistence to succeed. In southern Ontario, more than 60 petrochemical facilities are clustered along the St. Clair River south of Sarnia, earning it the nickname Chemical Valley. In the middle of this valley is Aamjiwnaang. The area around Lockridge’s home was one of the first in North America to have its oil reserves exploited. In the 1850s, companies such as Imperial Oil got their start in the new market. The neighbouring town of Sarnia became a hub for the fledgling industry thanks to its proximity to both oil reserves in towns like Petrolia and Oil Springs, and the Great Lakes waterway. With the concentration of facilities came pollution and new health problems for local residents. Lockridge describes the pervasiveness of illness in the community saying, “When someone around here is sick, we ask ‘What kind or cancer do you have? How much time do you have?’”

So when Lockridge and her fellow Aamjiwnaang community members heard in 2010 that the Ministry of the Environment had approved a 25 percent increase in production at Suncor’s desulphurization plant, they decided they’d had enough. It was time to do something. Together with her neighbour Ron Plain and the national non-profit Ecojustice, which mobilizes lawyers and scientists to defend Canadians’ right to a healthy environment, Lockridge decided to launch a legal challenge against Suncor and the ministry.

The case, often dubbed the Chemical Valley Charter Challenge, is part of Ecojustice’s right to a healthy community campaign. If successful, it could see a radical change to the permitting process for industry. Essentially, Ecojustice lawyers argue the ministry broke the law when it green-lighted Suncor’s increased production. The ministry, they add, failed to consider two main factors: the cumulative effect of the industry’s emissions, which they say violates both the “right to life, liberty and security of the person” enshrined in the Canadian Charter of Rights and Freedoms, and also the “right to the equal protection and equal benefit of the law without discrimination.”

The latter largely refers to Lockridge and Plain’s status as First Nations community members. As Kaitlyn Mitchell, an Ecojustice lawyer working on the case, says: “Ron and Ada have particular ties to their community, so it’s certainly not easy to just get up and move.” The ministry, she argues, is not recognizing the First Nations’ connection to the reserve lands—something she, and others, believes constitutes an act of discrimination.

To date the lawyers have submitted over 2,000 pages of supporting evidence (about everything related to environmental health, cumulative pollution, and the vulnerability of people living on reserve), as well as defended against Suncor’s attempt to have the case dismissed. Much of 2014 was spent cross-examining the 19 witnesses sighted.

While the Suncor case could prove monumental, it’s far from Lockridge’s first act of environmental activism. She harkens back to 2002, when Imperial Oil had a major “process-upset” that caused a sand-like catalyst to spew from their emissions stacks. The cloud of industrial pollution was blown south from the plant, across Aamjiwnaang, to the neighbouring town of Corunna. This was the first time Lockridge decided to do something. After the accident and the subsequent struggle to have Imperial Oil include Aamjiwnaang in their cleanup plan, Lockridge decided she could no longer be passive. She dedicated her evenings and weekends to fighting against the constant pollution around her.

In the first few years of her activism, Lockridge learned how to do air sampling using filters on plastic buckets, compiled data for researchers, and worked with biologists, such as Dr. Michael Gilbertson from the International Joint Commission (a Canada/U.S. government initiative that investigates issues related to the countries’ shared waterways). Together, she and Gilbertson re-examined a 1996 Ministry of the Environment study which was completed three years after Suncor had a large on-site accident. The ’96 study showed high levels of mercury in area plant and marine life—a startling discovery that caused Gilbertson to wonder how such things might affect the community’s birth ratio. Similar compounding questions arose as more studies were completed. Eventually, Lockridge began to wonder“My god, what did we start? I think there’s more to it than we realize.”

Although Aamjiwnaang has many forested areas, it’s the countless smoke stacks and flares that dominate the horizon. Among these stacks are warning sirens, which send the alert of an accident, usually resulting in an increased amount of pollution being released. Some of the factories are so close to Lockridge’s house that she hears their sirens and sees workers running to their cars—how can the danger possibly be contained within the company’s chain-link fences? Since 2004 Lockridge has been keeping a detailed calendar charting the “releases” and “upsets”, as the industry euphemistically calls them. In the decade since she started keeping track, she can count only two months without a notation; some months show as many as 15.

Even when the sirens are silent, government-approved emissions from many of the plants contain a host of toxic chemicals, the exact make-up of which is kept from the public (it’s considered a trade secret, and thus protected). Although the individual emissions of each of the 60-plus facilities are within the Ministry of Environment’s parameters, many, like Lockridge, believe the cumulative effect poses a serious problem.

High levels of mercury have been found in the blood, hair, and urine of some Aamjiwnaang members, and a community-led body mapping survey showed asthma levels in adults and children far exceeding that of the surrounding communities. In 2005, prompted by Gilbertson’s questioning on mercury effects, Lockridge co-authored a study of the on-reserve birth ratio. The result? Since the mid-’90s, two girls were born for every boy, helping to explain why there were so many girls’ softball teams in Aamjiwnaang. Many scientists believe that endocrine-disrupting chemicals such as toluene and benzene are the probable cause of the skewed ratio. These chemicals are frequently emitted by the area’s industrial neighbours. But it’s challenging to establish a baseline for air quality testing in the area, says Lockridge.

She once took a sample on what seemed like a clear day—one where there had been no recent sirens—but even that “good day” sample recorded low levels of carcinogens. Frequently, when studies are compiled and presented, little action is taken. Government and industry officials say the results need to be further tested. This frustrates Lockridge. In 2013, when yet another county-wide health study was proposed she asked “Will this be the scientific proof that is needed to say, ‘Yes, it is indeed the chemicals in the industry that are causing the health effects here?’” The representative from Health Canada, she says, responded, “‘No, it’s not.’” She sees the court case as a way to finally force the government into action.

Unfortunately, Suncor and the government have the resources to drag out the case—although Lockridge’s reputation and no-nonsense approach have helped counter the imbalance. She recounts one incident where both have helped. The Ministry of the Environment had been slow to cough-up an important document and when Lockridge found out she simply phoned the ministry and said, “It’s Ada Lockridge calling, I’d like a copy of the report and I’ll be there in 15 minutes. Can you have it ready at the front desk?” Sure enough, it was.

As of December 2014, it seemed likely that the hearing portion of the case wouldn’t start until spring 2015. A ruling could take many months more, and an appeal is likely if the decision is in favour of Lockridge and Plain. The slow pace of the judicial system works to the benefit of Suncor—the company is able to maintain its contentious operations for as long as it takes for a final decision to be heard and enacted. Meanwhile, Lockridge and many others in Aamjiwnaang will continue watching the smoke stacks, charting the releases, sampling air in plastic buckets and demanding their rights. And people will continue whispering tips and apologies to Lockridge.