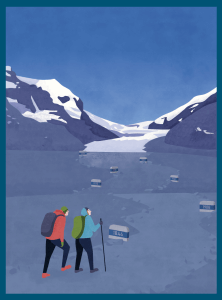 Standing at the toe of the Athabasca Glacier in the Canadian Rocky Mountains, the six-kilometre long swerve of thick ice—about the length of 65 football fields—opens up in a slow incline above you. It reveals crevasses and streaks of sediment framed by textured, scarred rock that rises over the sides of the ice expanse. These rocks underfoot and on the sides of the glacier are called moraines, rock that has been deposited or formed by the moving glacier.

Because glaciers move. Like a living being who, even in stillness, you can sense the gentle rise and fall of their chest with each breath. Then, when a glacier becomes too thin to move, it passes away. In August, Iceland commemorated the death of the Okjökull glacier, declared dead after it had become too thin to move. The plaque, a public death certificate, made international headlines before it was even erected.

“But what are we going to do with the 300 glaciers we lost between 1920 and 2005?” Robert Sandford, chair in water and climate security at the United Nations University Institute for Water, Environment and Health, asks me. “Do we issue death certificates for them? Most people have never seen them.”

Sandford is referring to research from the Western Canadian Cryospheric Network, a research project whose aim was to determine the fate of Western Canadian glaciers, that points to the Canadian Rockies having lost in the area of 300 glaciers in that 85-year span. Those roughly 300 esoteric glaciers are gone forever—half believed to have perished in the first 65 years, the other half in the remaining 20, pointing to markedly accelerated loss over time.

“Most people have never seen them.” It’s a statement that many people could relate to when it comes to a glacier. I certainly don’t know the numbers of people who have encountered one. What I do know is that for nearly 30 years I lived in Montreal, a bona fide city kid. I camped every summer in Vermont with my family and jogged by the St. Lawrence River. I was used to marshy cattails and the occasional heron sighting.

The first time someone pointed out a glacier to me, I was on a hike in Kananaskis, a wilderness area about an hour’s drive from Calgary, after having moved across the country to Banff, Alberta. I looked up at the pile of snow near the mountain top and followed it down to a brownish hammock of ice. “That’s a glacier? It just looks like… a bunch of dirty snow.” I didn’t get what the big deal was.

When I first visited the Athabasca Glacier in the Columbia Icefields, it was completely by accident. Hungover and sleepy, my friend Allison and I lay down on a set of dusty old couches at a Canmore, Alberta thrift shop. We were torn up inside—the remnants of too much fun—but also torn up that we were wasting such a beautiful day in the Canadian Rockies. Sure, Banff was our home, but that didn’t mean we wanted to take it for granted. We went back and forth about what we could do and realized that neither of us had been down the Icefields Parkway, a drive known as one of the most beautiful in the world.

For 185 kilometres we were blown away by the parkway’s endless beauty. The snowy peaks and turquoise lakes were just like what you’ve probably seen in postcards (and there are, as a result, actual postcards of it). It’s enough to make you question your place in the world but also, more importantly, to make you frequently remind yourself to pay attention to the road, lest the vistas distract you from your driving.

At this point in my life I had knocked quite a few hikes off of my list. Living in the mountains and working, at the time, where you could summit a mountain on your lunch break will do that to you. So, when Allison and I reached the parking lot for the glacier, I was surprised—and not entirely impressed—to realize that there was actually a hike to the glacier. From the Parks Canada website: “Toe of the Athabasca Glacier Trail 52 (moderate); 1.8 km return; 60 m elevation gain/loss; 1 hour.”

Hikes often have signage at their trailhead, a map, warnings about bears and other wildlife—sometimes even warnings about abandoned bombshells. When you reach the parking lot of this particular hike, you’re greeted with a simple sign emboldened with large numbers. “The glacier was here in 1844,” the first sign reads. From the moment you leave the car your guilt trip has begun.

1908, 1925 (you come to a road), 1948 … onwards to 2006. Every sign you pass is a chance for the reality of every headline about glaciers dying, and arctic ice caps to sink in just a little bit more. By the time you’ve reached the toe you no longer need a sign. Except to warn you about the dangers of walking onto the glacier without a guide (more adventurous visitors with the financial means can hire a guide to take them on the glacier). It’s a serious warning, as exploring the surface of the glacier without a professional could be—and has been—fatal, with the real possibility of falling into a crevasse.

“People are confronted with landscapes that are changing so quickly that it becomes a moral issue,” Sandford told me over a beer in Canmore, Alberta. “It becomes an ethical issue … because to ignore this is to condemn future generations to unspeakable possibilities in terms of climate disruption.” Every summer, the Athabasca Glacier retreats between five and 25 metres, and has retreated about two kilometres since 1844.

Parks Canada has been installing the signs to publicly mark the glacier’s decline for over 50 years. By email, they told me that, beyond the parking lot, the glacier used to reach to where the visitors centre, which houses a gallery they hope visitors will stop by to further inform themselves, now stands. “Parks Canada realizes this may be the first glacier experience for many visitors,” a spokesperson wrote. “The signs at the top of the glacier provide a tangible connection for visitors to the landscape they are experiencing. The signs help visitors understand the dynamic movement of ice over time.”

When you reach the toe of the Athabasca, the whitish-blue landscape (the colour of glacial ice that’s taken on when snow falls, is compressed, and becomes part of the glacier) framed by mountains that maintain snow on their peaks even in the height of summer should be inspiring. It should be like the moment when you’ve summited a mountain: small, at peace, inspired by the nature around you. Instead, you feel dread. Your stomach sinks in the same way as when you’re standing on that mountain top and look down, realizing that one slip on your tired, shaky legs could send you tumbling critically off the edge of a cliff.

“A visit to the glacier should give you both awe, complete reverence, and it should also make you very deeply thoughtful about what this loss might mean if projected over a long period of time,” says Sandford who has dedicated his career to water, and reminds me that ice is just frozen water. It’s something that sounds extremely basic but is at the heart of everything, including a marker of the climate crisis. Glaciers are the pulse of global hydrology.

“We’re not just losing glaciers,” Sandford explained. “Warming is causing melting and it’s a symptom of a much, much more serious problem.” As temperatures continue to rise and we see less snowpack and snow cover. It becomes a matter of water security, as the traditional stability of the hydrological cycle (water passing into the atmosphere as vapour) is lost, he explains. A warmer atmosphere carries seven percent more water vapour for every degree Celsius of warming. That heat melts more ice, sending more vapour into the atmosphere, creating more serious storms, and the disruption of historical weather patterns.

The accessibility of this glacier struck me in the same way it must have struck Sandford, who wrote The Columbia Icefield, a guidebook to the area. He’s written over 30 titles, many of which focus on glaciers, climate change, and water security. “As I’ve written in that book,” Sandford points to my copy of the guide on the table, “there is something deeply moving about that place. Deeply—I would go so far as to say, powerfully spiritual—about that place. I mean, you can get out of your car, close the door, and walk into the Pleistocene.” That’s the epoch that encompassed the most recent Ice Age.

There is an undeniable force that hits you, like the ice-cold wind off of the glacier when you realize that you’ve never actually seen one. Because glaciers actually produce their own weather. Cold air, that’s heavier and denser than warm air, is pulled downwind by gravity. You’re no longer in the same world that you were when you stepped out of your car.

Reverence is what Sandford called it. For myself, it’s a moment of clarity. The cold wind hits you; your eyes take in the cracks, scratches, and crevices the glacier has clawed through time and you breathe in knowledge. Or a thirst for more.

Not long before writing this, I was on the phone making plans to meet a friend who would be visiting from Montreal in Jasper, about 100 kilometres from the glacier. “While you’re up there you should drive down and see the Athabasca Glacier,” I told him.