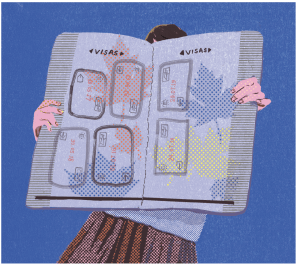 I often think of myself as a proud Canadian. Of course, Canada is by no means a perfect—or even racism-free—country, but as a Chinese-Canadian who has had the privilege of travelling widely, Canada remains one of my favourite places.

But I’ve learned that introducing myself as Canadian in a foreign country can be surprising to locals. On a high school trip to Spain, a waiter was almost speechless with surprise when my East Asian classmates and I identified ourselves as Canadian. When he left, my classmate scoffed, “Yeah, we’re ‘fake Canadians.’” The waiter was obviously operating on the assumption that all Canadians are white, and this was one of the first experiences I had with having my Canadianness questioned. From then on, I began to meditate on what it means to be Canadian—a very complex subject to me as a descendant of immigrants. But I suspect it is not an uncommon challenge to many Canadians of colour and Indigenous peoples who identify as Canadian, albeit with different nuances. I can only imagine the frustration a Canadian-identifying Indigenous traveller may feel at being implied as fake.

But things seem to have changed somewhat since that Europe trip. When I was in the U.K. as an exchange student, my British flatmates accepted my Canadianness with no question. Yet, another international student asked if I was “half-Canadian” because, apparently, I “don’t look Canadian.”

Several years later, an Indo-Canadian friend and I trekked through Southeast Asia, doing the cliché hostel-hopping thing. We stood out everywhere as a Chinese- and Indo-Canadian pair speaking North American English. (Interesting side note: a Welsh traveller distinguished our British Columbian and Ontarian accents, which we couldn’t distinguish ourselves!) Rarely did we see non-white people in hostels, and rarely did we see anyone else travelling in polyethnic groups. The locals were, not surprisingly, quite bemused at our Canadianness. “Really? You look Japanese,” one Cambodian hostel worker said incredulously.

I sometimes wonder if I would have been treated differently if I weren’t Asian. My travel partner, for one, claims she was ignored by a hostel worker who seemed more interested in flirting with white female guests. The same person also made fun of Chinese tourists who couldn’t speak English.

Canadians are often stereotyped as being nice and polite. And while stereotyping is problematic, I can’t help but wonder if being stereotyped this way might have granted us better service. For example, at the start of the coronavirus outbreak, some businesses and restaurants erected “No Chinese” signs. I wonder what the reaction would be if I walked into these establishments. Would I have to “prove” my Canadianness by brandishing my passport? Show that I had no recent Chinese visas?

In other words, Canadians experience some privilege, but only some Canadians get to enjoy it.

Having my nationality questioned is frustrating. Quite frankly, I identify more with the word “Canadian” than with the word “Chinese.” I am proud of my Chinese heritage, yes, but when asked where I am from, I say Canada because I grew up, went to school, and pay taxes in Canada; I have not had the same experience with China. I want to make it clear that I do not— cannot in any way—speak for all Canadians of colour. What I can say is that I’ve met many people of colour with similar ways of identifying and like experiences.

When I’m frustrated, it’s easy to blame the locals elsewhere for being ignorant and uneducated, but it’s also important to ask why these assumptions happen, and whether we Canadians are somehow complicit. After all, most famous Canadians—celebrities, Olympians, politicians, etc.—are white. And the locals I met may have never met a single non-white Canadian or have any framework for our existence.

The hostels I visited were also overwhelmingly white—something I’ve come to expect in backpacking culture. Christopher Kevin Oldfield of the ethically conscious travelling blog Lessons Learned Abroad, found writers of colour only comprised 18 percent of top travel blogs in 2015. “The overwhelming majority of people on this planet can’t just quit their shitty job(s) and buy a plane ticket to some remote destination,” writes Oldfield. “Being able to do that shit is a privilege, and one that is decidedly white.” (Full disclosure: this was just a casual survey that doesn’t take into account non-English blogs, but my personal experience aligns with the findings. Unfortunately, I couldn’t find reliable statistics on backpacker ethnicities.)

Your looks also matter. Just ask Muslim travellers who get profiled at airports. Darker-skinned travellers don’t only face discrimination in Western countries. Across Southeast Asia, it was a struggle to find sunscreen that doesn’t contain “whitener.” (I ended up buying “sunscreen for men” because for some reason they didn’t contain whitener.) My Indo-Canadian travel partner recalls being stared at and even avoided during her travels in Taiwan. While she reckons her blue-dyed hair may have contributed to the poor service she experienced, she believes she was treated differently due to her ethnicity. In one restaurant, she tells me, she was seated at the far back and ignored to the extent that she just left.

Thankfully, the “Canada is white” myth is waning. We are seeing more non-white faces in popular culture—shows like Kim’s Convenience come to mind. I write this column to highlight how important it is to keep doing this, to keep upholding diversity in Canadian media and among the Canadian representatives (again, be they authors, politicians, athletes, etc.) we export to the world stage. This work that we do at home is more than a PR stunt; it carries to other corners of the world in the knapsacks of everyday Canadians like you and me. Racism is something I rarely experience at home, but how I’m perceived can be a big deal when I am abroad.

Canada is one of the few places in the world built by a whole rainbow of people. I once heard someone say that non-white people have no right to be Australian because it was white people who “built Australia” as we know it. The same argument could be extrapolated to Canada and the U.S. But Indigenous civilization existed in North America long before the arrival of Europeans. And if it wasn’t for Indigenous peoples, the Europeans would not have survived to build modern-day North America. Likewise, the American economy depended heavily on Black slave labour. And Chinese people literally built Canada by building a sea-to-sea railway for lower wages than their white peers and, in some cases, losing their lives.

My parents often tell the same story when discussing their arrival in Canada as new immigrants: “Never had we seen so many different people, people of different colours, all in one elevator.” I look forward to a day when this will become the default picture of Canada around the world, and for us to truly live up to it at home.