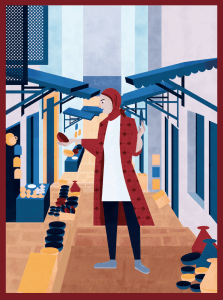 I am trying to get my grandfather’s attention at a busy intersection in Tunis, Tunisia. It is 36 degrees and dusty. He is old and frail and has outgrown his home country since he left for Canada 20 years ago. My grandfather once had every winding alley of the downtown core memorized, but he’s unfamiliar with this particular suburban neighbourhood that sprouted in the 1990s. Since his immigration to Canada, I’ve been back to Tunisia more than him. My ability to navigate the now hyper-urbanized city makes it look like I belong here more than he does. I wave my hands frantically to catch his eyes but to no avail. Cabs and motorcycles and crowds rush past me. A man two times my stature leans into traffic to help call him. He yells, “Sir, sir, your granddaughter!” The man’s unruly technique works; I raise my hand in gratitude. My grandfather and I are reunited.

In my experience of Tunisia, there is no such thing as bystander effect. Strangers are almost always in your business. Shopkeepers, servers, and cashiers all ask me borderline intrusive questions in our few moments of shared exchange. I have visited Tunisia, my mother’s home country, with my family many times, but the summer of 2019 was the first time I went alone. These unsolicited interferences by strangers were at times useful to get directions, but many times they exposed my privilege and guilt. Every time I got into a taxi, the driver would ask where I am from. I didn’t have to say anything for him to guess I was not from there. They noticed from my clothes, my demeanour, even the way I hailed the cab. (Tunisians use their index finger, pointing outwards at hip level, as opposed to the North American arm-up flagging technique.)

I had thought I hid my foreigner status well. Ironically, I had decades of training back in Canada. I was born here but I was still not considered “from here.” Since I started attending public school as a 10-year-old, I learned how to camouflage different parts of my visible Muslim identity. I found myself using all sorts of similar tricks to hide my relatively privileged status in Tunisia. There were some basics: never, under any circumstance, speak English—especially not “perfect English”—in public. Sometimes, when we travelled together, my brother would slip up, blurt out an English word, and I would nudge him with my elbow to remind him to lock down his Canadian accent. Do not wear clothing from well-known North American brands like the Gap, Roots, or American Eagle. Regardless of what I did, I always got caught. I reeked of being from somewhere else. From customs officers to cab drivers, almost every person I spoke to was curious (read: suspicious) of my background.

I always met their suspicion with my own. Why is the cab driver asking me so many questions? Is he going to take a longer route and charge me more because he knows I am an outsider? Is he going to ask me how to immigrate to Canada? When I entered Tunisia, I presented my Canadian passport. I had no other, but the customs agent questioned why I did not have a Tunisian one. I pretended not to know the laws have changed and that I am now eligible, even as a half-Tunisian. I lied because it was easier than explaining that a Tunisian passport seems like a hassle, if not a liability, as a Canadian Muslim. Then, I felt guilty for all my disproportionate distrust of strangers.

I always offer vague answers; I was scared earnest responses would reveal my privilege. I was scared of the relative social power I yielded there. I had done nothing to deserve it. I had this power because I carried a certain passport and spoke a certain colonial language. But the Canada that my family and friends in Tunisia think they know is incongruent with the one that I live in. Their notion of Canada is of opulence and opportunity. They are surprised to hear how much I pay for my Toronto apartment and that during my short walk to work I meet half-a-dozen people living on the streets. Every criticism of Canada I offer surprises my Tunisian family and friends. It is my way of absolving responsibility. As if to say, “I promise it’s not as good as you think.” In a series of events beyond my control, my parents emigrated and landed in Canada. Now I reap those benefits. My very ability to say I live here and hold that passport places me in a class unattainable for most people.

To a non-Tunisian, my hijab and dialect, albeit broken, mean I superficially blend in. But the people who breathe in the polluted urban air of Tunis as residents there know that this is a veneer. How am I any different than other “Westerners” who travel to the global south? I have an intimate entry point to Tunisian culture because of my family and friends, yet I will always stand outside of their structures; I do not have unjust run-ins with the police or corrupt public officials. I can slip away from most sticky situations because of my nationality. In Canada I am an outsider with less privilege than, say, a cis white male, and yet here in Tunisia I am an outsider with plenty of privilege.

What does it mean that I have intimate access to the lives of ordinary families there? I feel like an intruder. I am identified as a foreigner, and sometimes I let myself fall into that category. I tip cab drivers 30 or even 50 percent, even though tip culture basically does not exist in Tunisia.

It will mark me as an outsider, but it is part of me acting on my guilt.

I wonder about my responsibility as a Canadian in Tunisia, travelling to what some might think is my “back home.” From my initial interactions at the border, I know Tunisia cannot ever fully be my home. Yet, my extended family and close family friends welcome me into their lives and I feel an emotional proximity to them I don’t experience in Canada. How do I reconcile that?

I think it is precisely the ambiguity of my belonging that demonstrates the hybridity and shifting natures of my identities. When I am in Canada I struggle between my identity as a settler and the daughter of immigrants, who themselves were displaced due to colonialism. I constantly ask myself how I should engage with the struggles of Indigenous nations and marginalized groups. In Tunisia, to many of my extended family members I represent the children of a generation who escaped from some miserable fate. I am bound between these two parts of myself. I must couple the acknowledgment of my privilege with the readiness to listen to other people’s stories.

On my last Friday night in Tunisia, I frantically try to get a cab to go to a family friend’s house in an upper middle-class neighbourhood, considered a lively area of town. I spend 40 minutes trying to hail a cab unsuccessfully. I realize that to find a cab, I have to notice one that was slowing down to drop people off, run alongside it, and then slip in as the last customers are paying. (Like I said, you learn tricks.) When I finally secure a cab, the driver runs through the usual “you aren’t from here” conversation, and asks for my destination. He wants a more precise location than I can provide him with and asks me to call my friend and hand him the phone.

He snuggles my phone between his collarbone and neck. As he shifts gears, he smokes a cigarette with the other hand. Occasionally, he picks up a glass of hot tea from his dashboard. We are going at least 60 kilometres an hour. My heart is beating fast. His unsafe driving is unsettling, but he continues to laugh into the phone with my friend as if they were catching up after years apart. When he hands me my phone back, I finally manage to sink back into the seat; I let out a giggle. Much like this cab driver, Tunis is chaotic; it is a metropolitan city suspended between its French colonial past and its American capitalist present. My inclination is to make sense of it, to order it. But refining my ambiguous position there isn’t my purpose. My adventures in Tunisia teach me to accept the uncertainty of my roles there and here, to accept the disarray, and to know that I am fortunate enough to collect these experiences across borders.