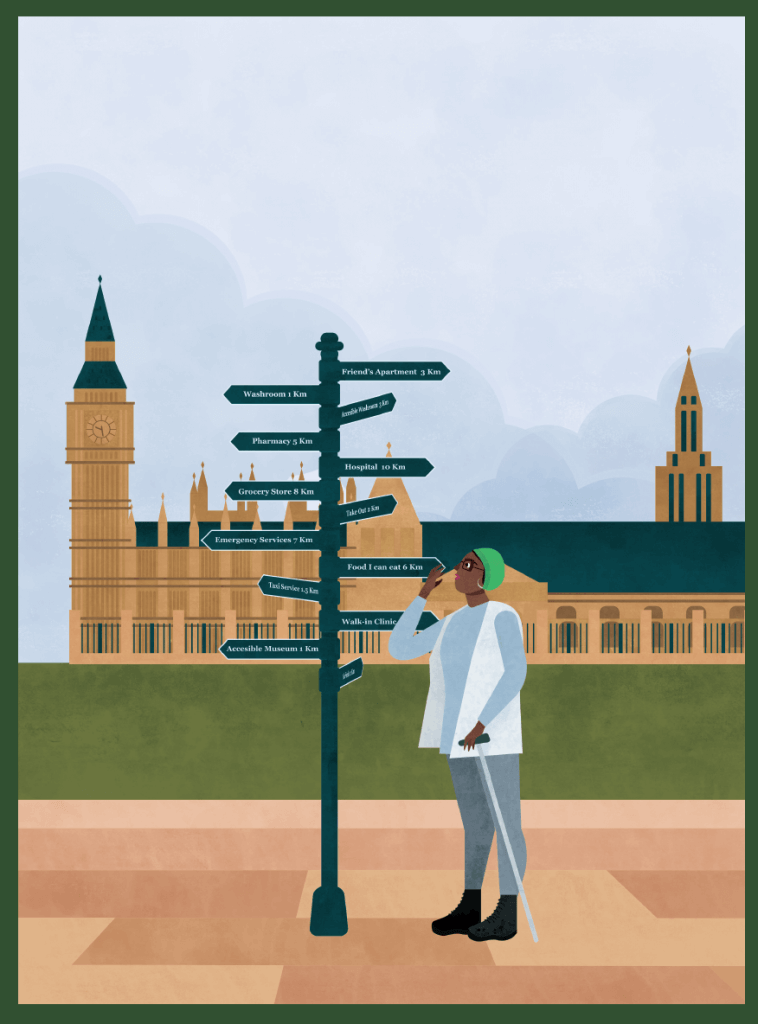 I have travelled to the U.K. twice in my life. The first time I went was with my then-partner in 2009 and the second was on my own, in the summer of 2019. We (my now ex-partner and I) went to Brighton, Cambridge, and London. We walked for hours on cobblestone. I ran up and down relic staircases to catch trains that would spit us out at the top or bottom of another tower of stairs. During our final few days, we went on a hike that resulted in what I would later understand as my first fibromyalgia flare. Everything I thought I knew about moving my body became unrecognizable after that.

As a then mostly able-bodied younger adult living and working in a major metropolitan city, travel was limited only by cost and time off of work. I travelled by stuffing huge camping backpacks, wearing one on my front and back. I would book accommodations without paying much attention to proximity to food or transit. I would agree to go on an eight-hour downhill mountain hike. I would turn my phone off more than I kept it on. As long as I had my antidepressants, passport, and a journal, I was good.

Ten years and some 10,000-odd kilometres of travel later, the considerations I have to make are a universe apart from the days of booking a journey with four stops plus two nights spent sleeping in an airport because that’s what was the cheapest. As a chronically ill and disabled person in their mid-30s, and as someone who has been living with some iteration of chronic pain since adolescence, I now know to try and minimize the inevitably negative impact travel will have on my body and symptoms.

In 2019, I found a direct flight from Manitoba to London and one with just one stop on the return. Once I’d landed and was in my ride from the airport to the apartment I was visiting—one, I might add, that had a full kitchen—I downloaded the other local rideshare option to the one I was currently in. I downloaded the food delivery apps a pal suggested and scanned and noted which ones were safe for me to try given my food restrictions. I rarely took public transit that whole visit. When I wasn’t at home with my friend or alone in their place, I was cabbing to and from various boroughs after street-mapping the area to see how many steps there were to get to the gallery, museum, or shop I wanted to go to. I can’t think of more than one meal we ate out, but I do remember all of the gluten-free, dairy-free, no nightshade and allium meals we made and ordered in and composed of a mix of both. Instead of wandering up and down London streets, playing with alley cats and slowing my breath to the rhythm of snoring yard dogs, I peeled my eyes during every ride and asked drivers questions about each neighbourhood and landmark we passed through. I sat on any bench I could find in between slow cane-supported jaunts, watching the vibration of a city ripple around me.

There is so much risk and worry in leaving my home base. Like most things in the life of a chronically ill person, moving my body from one place to the other—be that from couch to kitchen sink or front door to Flin Flon (which is at the Saskatchewan–Manitoba border, for those unfamiliar)—takes considerable planning, compromise, anticipation, and discomfort. I live with chronic pain and fatigue, which for me means that no matter how much I sleep, there are days when my exhaustion weighs every cell and fibre down. At home, this looks like limiting the number of trips I make from one room to another. Either piling my arms full of what I’ll possibly need when I finally sit down, or spending too long fussing in one room, trying to get everything done in there before moving on.

I haven’t felt ease of movement, comfort, security, or reliability in or from my body in decades. Over time I have learned, often painstakingly, how to ask for help. And yet I still struggle to ask, because what I truly need feels like more than I have the right or resources to ask for. So when I have the opportunity to receive support from a service designed to provide just that, I (metaphorically) jump at the chance.

One of the services I make most use of in my various jaunts from home, and one offered at all airports I’ve intersected with in the last year, is the in-airport wheelchair. The first time I used an airport wheelchair to get from check-in to the gate was in 2015 in Detroit after the Allied Media Conference. I was with another spoonie friend and cane user who travelled frequently for work. (A spoonie is a person living with chronic illness, who uses the metaphor of spoons to describe or quantify levels of energy and capacity. This comes from “the Spoon Theory” by Christine Miserandino which is definitely worth looking into.)

It always seems a little bit softer in the world, a little bit safer, when I’m moving about an unfamiliar space with another chronically ill person. Once I am on my own in the airport, I feel hyper-conspicuous as a Black, gender-nonconforming, chubby, and seemingly able-bodied adult being wheeled through packed corridors and security by an attendant. Without a cast or any easily digestible marker of temporary disability there is an incredulous texture to the unabashed looks and stares that I receive.

Most Canadian airports that I have flown through use standard folding manual chairs to transport passengers throughout the terminals. These chairs are not designed for a fat body in pain carrying bags and using a cane.

If I am carrying on my luggage, even if I manage to get my piles contained into acceptable carry-on and one-personal-item size, most chairs I’ve been provided with are not equipped to hold anything other than me. There are a select few airlines and airports (e.g. Swoop in Edmonton) that have the kind of chairs with an underneath carriage for suitcases or bags to go (something worth looking into if this affects you, and if you can find this info). Otherwise, and especially as a younger person who is assumed to be more capable of doing this, the attendants will stack whatever bags, coats, canes, and suitcases on my lap and between my knees. With an instruction to hold on with my leg muscles, I have to squeeze together from thighs to ankles, lest my suitcase spill out and skid across the floor. (Because my hands are busy trying to hold onto my I.D. and boarding pass, I can’t use them to help hold things together.) The ride from desk to security is uncomfortable to say the least. After security, when everything has been taken out and moved around and coats are off, etc., the pile becomes more aggressive and unruly. At that point, I just hope the gate is not too far away so I only have to feel this way briefly.

Temporarily able-bodied (a term I prefer because most people will experience some element of disability in their lives) people take for granted how much the autonomy and agency available to them in an airport influences their experience. For example, the saunter to the gate where you can stop in at the snack cart or magazine shop to pick up that last minute thing you forgot. Under the charge of an attendant, unless it is a very slow hour at the airport, you can’t stop until parked at the gate. If there’s time between arriving at the gate and boarding, I might be able to reorganize my piles into something more comfortable. With a bit of extra time I can try affixing my bags to the chair itself to push along the hallways.

When I arrive at the airport and inform the check-in clerk that I require a wheelchair, I’m almost always met with some flash of concern passing across their face. There are often not enough staff scheduled and so they know that I’ll have to wait. I have lost count of the hours I have spent sitting uncomfortably in a hallway or behind a partition waiting for an attendant to wheel me to my next destination. I came close to missing two flights last year alone because I sat waiting for over 40 minutes for someone to come get me. I am usually scolded or shamed for not arriving hours earlier than other passengers. Being told that if I need help, I’d better be willing to wait for it or compromise by walking myself to the gate is never how I want to start a trip.

It’s impossible not to feel like a burden on these people that you don’t even know because of their reaction to the request for support. Most often, staff will talk with other staff along the way, sometimes about the task of transporting me. As a passenger under attendant charge, I am one of the first to board the plane, along with anyone else “that needs a little extra time to board.”

On landing, I am among the last to leave. That’s because we must all wait until every other passenger departs and they send enough attendants with chairs to get myself and others off the plane. I try not to book flights with short connections because of this. If I want the chair, I have to wait.

Packing and deciding between checked bags and carry-ons is a heightened challenge when one is trying to balance not being able to carry heavy things with not wanting to risk losing essential items. When there are medications and back up medications (extras packed in case something happens to carry-on stash), cozy clothes for sensory sensitive skin, at least a small amount of my own food for the first day, physio balls and foam rollers, ice packs and heat bags, orthopedic pillows and unscented linens, and more I have to find a way to fit, the anxiety of lost luggage grows. That anxiety, which many air travellers share, rattles differently when what’s inside determines whether my body is going to be baseline comfortable and relatively asymptomatic, or not.

A decade into this chronically ill orbit and I am still learning how to offer moments of care and comfort to my jagged-edged self. Such a shift can take years, seasons, generations to feel smooth again. Every journey I ask of myself is an exercise in care, access, and danger. As I reflect on the ways I inhabit the role of passenger and visitor, I think of the privilege of movement that state-approved citizenship provides. (This while simultaneously reaffirming colonial structures and employing surveillance tactics under the guise of border security.) Moving my Black, queer, sick, body from place to place is a risk as much as it is a right.