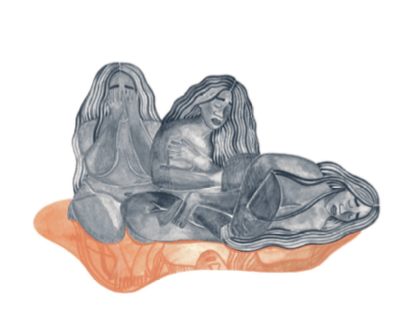 It seems like 2020 has been the year for everything and everyone to break down. The complete isolation that so many of us have been forced into has destroyed any semblance of the old selves that were left. With numerous murders of Black bodies on my timeline, I had no choice but to contemplate my own life as a Black, queer woman and the space that I occupy in this body.

Breonna Taylor was on the cover of what seemed like every magazine in the spring and summer of last year. Many hashtags were created, remembering her name and violent death, across all social media platforms. The trendiest political accessory since BLM. A fat, dark skinned Black Woman was on the cover of Vanity Fair and it wasn’t a stock photo used to depict the “average African-America woman” in what would be a story lightly coated in Misogynoir (according to Wikipedia, misogynoir is misogyny directed toward Black women where race and gender both play roles in bias). What may have looked like an allyship on the outside to some, seemed like just another poser looking to be on the right side of history by making a few coins along the way to me. The world only seemed to care about her now that she was dead, but why was no one around to protect her and others who looked like her while she was alive?

Her name triggers deep feelings of sadness and loneliness, but mostly anger.

I’ll be the first to admit that most of my insecurities stem from being fat and Black. I’m not sure if one insecurity was ever bigger than the other, but I remember in kindergarten when  another kid, Veronique, told me that my hair would never be as long and flowing as hers because, as she put it, “Black people don’t have long hair.” I’ve heard comments about my skin colour my entire life from family members, mainly because my younger sister is a lot lighter than I am. Kids made comments about how fat I was every chance they got. As a child, I didn’t understand these feelings of unworthiness and some of the ways they manifested. But I knew that these feelings were a reflection of how the world saw me, even at five years old.
I understood that I would always be different and that there would always be a person or situation to remind me of that.

I’m angry because no one wants to protect Black Women until there’s a video or a hashtag.

Reading about the terrifying account of Breonna Taylor’s death, even now, makes me profoundly angry. Angry because someone determined that her life meant so little that her safety wasn’t even an afterthought. I’m unbelievably broken because I know what it’s like to be a Black Woman who no one believes; to have people have misconceptions about who you are based solely on the colour of your skin, the size of your jeans, and the people you know. It absolutely reminded me that no matter what, many won’t see past my skin, size, and gender enough to view me with an ounce of humanity. I wept not only for her, but for the others whose deaths are forever memorialized on the internet for their families to relive. I knew the pain I felt connected me to so many others who know how easily it could’ve been them, who are also praying that this never happens to them or their loved ones.

I wanna cry with my community, I wanna hug my people and tell them I love them with all my heart, but COVID…

The truth is Breonna Taylor looks a lot like me, but I live in a community where practically no one looks like me. I’m forced into isolation, like most people in the world, and I can’t even reach out to my family, my people. There’s a certain naiveté that comes from living in Canada, especially in Victoria, B.C., where I am surrounded by white people all the time. The assumption is that racism is some ancient concept that has been resolved. Microaggressions are almost a daily part of my life, so much so that often I don’t even realize it until I’m in the tub reflecting on that weird conversation on the bus. It’s almost as if I’ve become desensitized to them. I know it’s coming, so I don’t bother reacting, or sometimes, I don’t want to be seen as an angry Black woman.

People who understood the emotional gravity of the situation checked up on me and made sure I was taking care of my feelings. People who didn’t understand wanted me to either help them come up with a slogan for the designated BLM protest they were attending or to basically have me show up to the protest as their token Black friend. The internet has ruined many things, but it has also created lifelines for those struggling. It would take too many pages to detail the level of loneliness I felt. To be so cut off from everyone, but more so from the people who look like me. Grieving virtually is not ideal but, like I said, a small lifeline was created. So many Black Women made it a point to create safe spaces where Black Women could grieve and comfort each other. A beautiful way of coming together and loving women you’ve never met, but instantly bonded to. A bond that was missing in my current life, due to this pandemic.

Here come the lows again, with a splash of a global pandemic…

I’ve struggled with mental illness my entire life. Depression, anxiety, mania, drugs, alcohol: you name it and I’ve probably struggled with some of it at some point in my life. These have been coping mechanisms, especially for my anxiety, since I was 16. But during this pandemic, my mind reached its maximum threshold for all the pain I was masking. There were days of sitting in the tub, crying for hours. They were also days of blacking out and staying up for days. I just could not pull myself from this hole, feeling like I would never push through this self-hate and disgust that I had for the world.

As a fat, dark skinned Black Woman, the death of Breonna Taylor was not only an incredibly violent murder, but a reminder that the world doesn’t care about Black Women.

We are the mules, mammies, caretakers of the world. We’re strong, but we’re never allowed to be vulnerable or seen as weak. We’ve had to fight for every single thing we’ve ever had, which only reinforces the dated and misogynistic trope that we can fight for everyone, including for those who don’t want to fight for our survival. Black Women are often viewed as superhuman beings because no matter what is thrown our way, we find a way to manage it, somehow. It’s not because we want to, but because we have to. We’re tired of seeing yet another one of us forgotten and discarded until the next victim is dead. We just want to feel protected and loved. It’s time to uplift Black Women, considering we’ve been uplifting the world since slavery. This was yet another way to remind me that the world didn’t always care about Breonna Taylor. Why would anyone ever care about me? Why would anyone want to protect me?