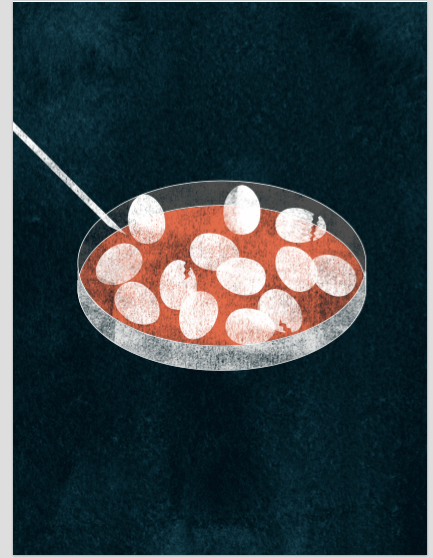 Being a Plains Cree non-binary lesbian with a non- functioning uterus makes baby-making hard. And the looming pressure of total environmental and climate collapse has made a lot of my friends choose not to have children at all. Is it selfish to bring a child into the world as it stands now? And can I do it alone? These were the questions I was facing as I also recognized that turning 40 meant I didn’t have a lot of time to keep dilly- dallying on the baby thing.

I asked for a referral to a fertility clinic to freeze eggs. I had been juggling some concerns when I decided to go this route. For one thing, my home province of Saskatchewan had routinely been non-consensually sterilizing Indigenous women, usually coercing them during child birth with the threat of not letting them have their babies if they didn’t comply. That wasn’t why my uterus didn’t work though. I had fibroids, bloody gory periods, and a lot of cramping every month. When I finally convinced the doctors to give me an endometrial ablation I thought that was the end of it. I didn’t want to be pregnant, which probably seems at odds with the desire for children.

That came later, but through my whole life I had never wanted to be pregnant. Children yes, pregnancy no. I also ended up needing to take ongoing lifesaving medications in my adult life that are not meant to be taken by pregnant people—another strike against going that route, had I wanted to.

I wanted to use my own eggs because of the continuous genocidal policy in Canada which aims to
reduce Indigenous populations or displace Indigenous children into non-Indigenous families. I wanted
my baby to have a status card, like me, so they could access some health benefits; I wanted a baby I could raise with knowledge of their Plains Cree background and spirituality, history, and language. I wanted a baby who I could teach about our ancestors and take to ceremonies and gatherings, knowing they were a part of us. I wanted a baby who I could link to a long lineage of survivors and who I could raise to be a good loving healthy person with some of the good parts of me. And if there were some of the more di cult parts of my genes in this child’s life, I wanted to know that so I could help them get tested for adhd or assessed for mood disorders or any other more random family medical things that came up.

I thought I would face gatekeepers when I started trying to make a baby. I’d looked into adoption and saw a couple of ways I might be ineligible to be considered as an adoptive parent. I have bipolar disorder, so I thought maybe my doctor would try to talk me out of it or not refer me on account of that. But she was happy to and didn’t think there was anything unusual or bad about me becoming a parent. Likewise, when I started giving my medical history to my fertility specialist, I thought he would refuse to continue on with me. Going to a fertility clinic in Saskatchewan could have been different I suppose, but I felt supported by the medical system in Toronto in possibly making an Indigenous baby, which was an immense relief.

I met with the specialist and was given the statistics on ivf. Some eggs wouldn’t be viable. Some eggs wouldn’t fertilize. I was told some would have genetic issues that could increase the possibility of miscarriage. Out of 15 eggs, at my age, there would likely only be one that could turn into a baby. They were dire statistics. I had 10 antral follicles for an egg to mature in, which meant I would probably get at maximum 10 eggs. Not 15.

In my early to mid-thirties, closer to prime fertile age, I did write o the idea of having children. The world
just seemed doomed. With capitalism grinding it down, a massive extinction event, corporations getting away with poisoning and murdering ecosystems and people, I wasn’t sure. As a person marginalized in multiple ways, I knew I didn’t have a whole lot of power as an individual to stop this kind of ongoing catastrophe. And so, I’d decided, I wasn’t going to bring someone into the world to be faced with this kind of bleak future. But this decision didn’t stick.

When I started taking follicle stimulating hormone shots, I had to keep doing blood tests and ultrasounds to monitor what my ovaries were doing. At the beginning, the doctor said I might only get a couple of eggs. It was a depressing prospect since the cost of an ivf cycle and egg retrieval is about $10,000 to $15,000 here in Ontario (unlike other provinces, Ontario covers some of this). That was a lot of money for only two eggs. I was fortunate that I had just enough from a couple of contract jobs I had done to pay for it, but as a full-time artist I didn’t have enough to do more than one cycle. Being single and living alone meant I had to start doing my own shots in the days between clinic visits. The first day I had to do a shot alone I woke up with tingling fingertips, a typical symptom of anxiety for me. My hand shook when I brought the needle to my glute, but I was surprised at how easily it sunk into my esh. After, I felt a kind of rush thatI had managed to do it alone.

The end of my ivf cycle was looming and the process was scaring me. To retrieve eggs they have to insert an ultrasound wand vaginally and then use a needle to aspirate each follicle and take out the eggs. The specialist said I would be under conscious sedation so I could still move around, but I would be sedated and not remember. The thought made me nervous, speciffically the word “conscious.” And I didn’t understand how conscious that meant I would be.

I’d grown tired of waiting for a partner to show up to have a baby with. Which is why I had begun this process. It had been a long wait. I was turning 40 and I’d never even had a girlfriend who was serious enough to live with. I’d had a string of unrequited loves and if I was going to have a baby I needed to start working at it even if it was alone. I needed a surrogate though. I had a recruited a close friend as a sperm donor—a kind, funny, smart man who I trusted. I just needed someone to carry this baby. Though, by freezing eggs I was buying myself some time.

When the day finally came I was solo, in a small room that smelled like a sandwich, with my legs up in these sort of slings, being shown a dish with my name on it on a monitor. This is where the eggs would go. They gave me conscious sedation drugs and the next thing I remember is waking up in the recovery room, where I sent some incomprehensible texts to my friend who was coming to pick me up.

Honestly, being single and going to fertility clinic appointments alone is hard. I became acutely aware that things were just easier if you were part of a couple. Couples at the clinic were in it together; they went to the appointments together, they brought each other coffee, they had quiet conversations about their options. They were supporting each other. I was alone and had been for a long time.

They got 13 eggs. Ten were viable. Pretty much all from that amazing champion right ovary. They are in a lab freezer somewhere on Bay St. Now, a year later, I am taking the sperm donor to the same clinic to bank his sperm, and about to pay the rent for another year of storage for my eggs, still single and still looking for a surrogate.

Recently, news came out that we only have 10 to 12 years left to get our shit together before climate change becomes irreversible. It’s looming. Is it responsible to bring children into this world? I feel like that’s a loaded question because the flip side of it is that if we don’t bring children into this world,
why would anyone care what happens? I know that’s not my way of thinking, but it’s a peculiar kind of call to apathy. I like to think we can still change this future. I know populism and conservative governments are going to exacerbate the problem. But I still feel there is a future and I still feel that I could be a good parent.

I really want to contribute to helping the next generation of Indigenous kids be born and raised in healthy, happy homes. I know how small our populations are compared to the rest of Canada. I feel that my genetic line of Plains Cree medicine people and warriors had something important to give to the planet’s future. I think it was a feeling of resistance that made me want to have a baby. I know my ancestors have survived smallpox, wars, Spanish Flu, residential schools, day schools, and depressions. I know my ancestors have created amazing works of art, have shaped Canadian history, have been strong leaders and caring parents and fostered a sense of community responsibility amongst each other. These qualities felt like things some small being coming into this world would need and could use to make things better for themselves. I felt that there were spirits and medicines and mysterious forces that could give this person a good foundation to do something amazing in their lives. At the same time I know a lot of people put too many expectations on their children, and I don’t want to expect my kid to be the one to save the world. But I do think I could give this kid a good start.