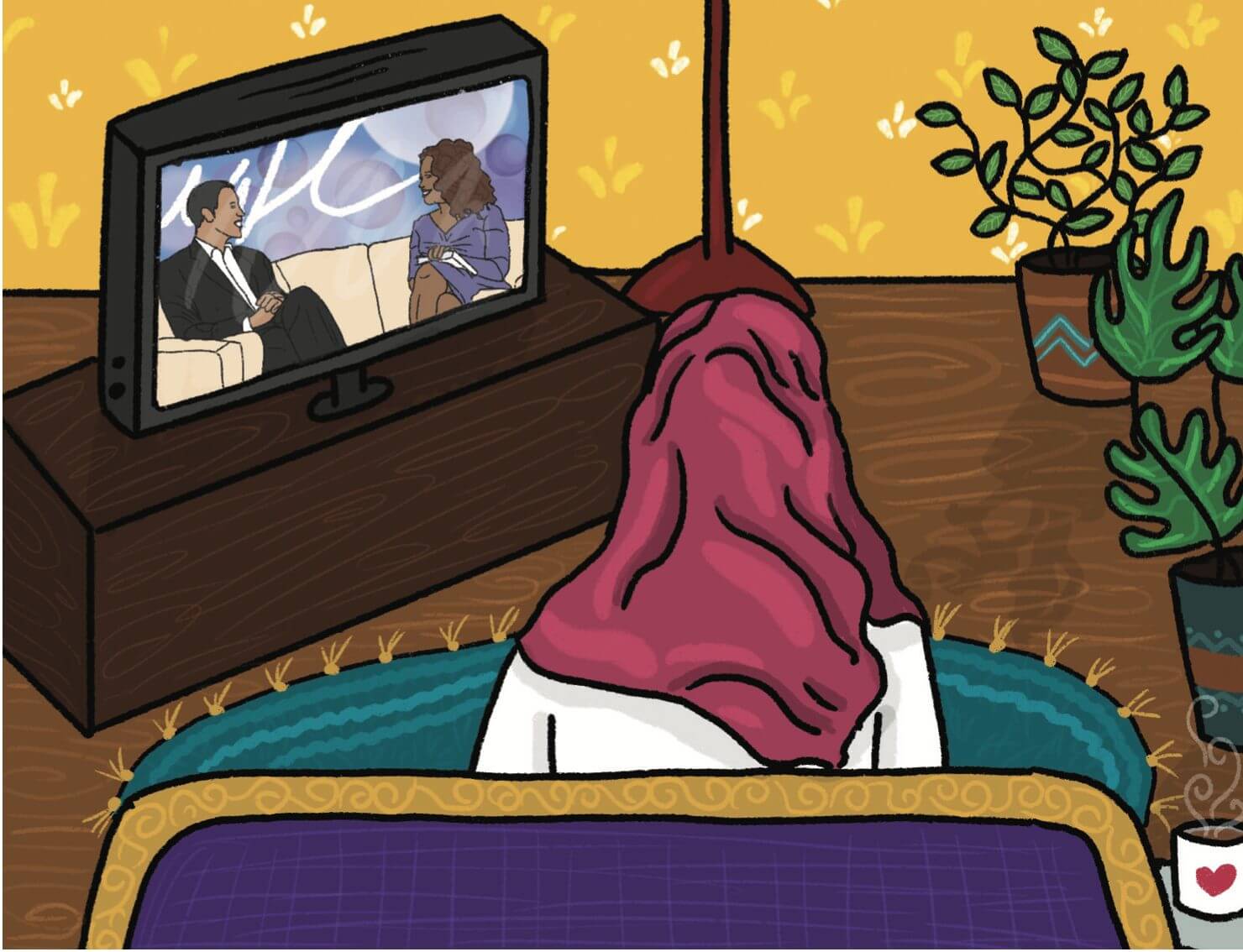 Growing up in a traditional first-generation Muslim-Canadian family, I constantly struggled to determine what career I wanted to pursue. For years, I faced the dilemma of whether to satisfy the vision my parents had created for me or to go out on a limb and pursue my own interests of joining the entertainment industry, ultimately as a talk-show host. The rarity of this occurrence in the Muslim community often stems from the constant exclusion by the media. While being a hijab-wearing Muslim-Canadian woman of colour with Pakistani roots are parts of my identity that I cherish the most, this identification in present-day society constitutes a life of trials and tribulations that I would have never imagined to complicate my career goals.

Everyone grows up with dreams and aspirations. Regardless of how grand or modest they may be, we never discourage our imaginations from roaming free. I personally have been an avid dreamer for as long as I can remember. Throughout my childhood, I would cultivate the most ambitious fantasies, encouraged by the individuals I witnessed on the television screen before me. Whether it was actress Zendaya, dancer Julianne Hough, or any of the talk-show hosts on the panel of The Real, I found myself absolutely mesmerized. With fluctuating dreams of becoming an actress, dancer, and talk-show host at one point in time or another, it wasn’t until high school that I actively decided to make a change. The moment I’d stumbled upon The Real in my sophomore year of high school, I became captivated by the idea of becoming a talk-show host and began treating it like an achievable possibility, rather than a mindless fantasy. I vividly remember performing a talk-show skit in front of my Grade 10 religion class and being hit with a wave of realization that this was my calling.

It was the first moment I became consumed with this vision, yet there was always one setback that instilled a sense of doubt and hesitation within me—my racial and religious identity.

From the greatness of icons such as Oprah Winfrey and Ellen DeGeneres, I was never able to overcome the fact that there was no reflection of someone who looked like me on the 21-inch Philips Box TV set I was so enamoured by as a child. The division between the plethora of white women and the scarcity of women of colour (of course, with the exception of the aforementioned Winfrey)—especially Muslim women—has always operated as an impression of unwelcomeness. Although it is the industry’s responsibility to work towards this much needed change, it is also up to us to raise our voices and ensure ourselves to be heard, paving the way for future generations. This world we occupy is extremely vast and embodies a plethora of unique groups and nationalities that unfortunately aren’t pictured on our screens. As Academy Award winner Octavia Spencer says: “Little kids need to be able to turn on the TV and see real-world representations of themselves.”

This seemingly American problem also bleeds into the Canadian media industry. Despite over a million Muslims calling Canada home, this one identity, which resonates with roughly 1.9 billion individuals across the globe, warrants far more representation than the obnoxious token character created in a careless attempt at diversity. What showrunners and producers fail to consider is the ways in which the images on our screens impact us past simple viewing pleasure.

These individuals possess great influence and behave as idols to people across the world—a world encompassing tremendous diversity.

Inspired by my mother, I first began to wear the hijab in Grade 3. While I was thrilled and in awe of the beautiful message it depicts, I wasn’t able to fully commit until five years later. As I went on to high school, there were plenty of other women who adhered to this practice as well. But I noticed it was something that instilled a sense of shame within them, similar to the hesitance I carried years prior. This is what happens when we are inclined to conforming to North American beauty standards that have never consisted of any Islamic or other ethnic traditions. The inadequacy of representation severely affects marginalized groups who are never celebrated in mainstream media. Although I grew up watching a fair amount of Bollywood,

I gradually slipped out of that cultural niche as many first-generation children do. I found myself regularly diverting my attention to Hollywood content any chance I had. Much to my dismay, however, I was incredibly disappointed to unearth that the dreamland of all these amazing productions was quite literally Black and white. Besides the quirky personalities simply incorporated as token Muslims, making a complete mockery of the religion, there was no depiction of someone like myself. With every female Muslim character being linked to harmful stereotypes or stripping her hijab off for a white boy, we are illustrated as powerless entities in need of saviours. Many even start believing it.

The entertainment industry is slowly waking up to the idea of change and permitting a more welcoming space for underrepresented groups. Iman Vellani is an up-and-coming actress from my hometown of Markham who will be playing the titular role in the highly anticipated TV series Ms. Marvel, making her Marvel’s first on-screen Muslim hero to headline her own comic book. It’s great to see Hollywood’s increased efforts in working towards diversity and representation for marginalized communities, yet they are heavily overdue.

We need to recognize that we are in the 21st century, living in the greatest melting pot of different cultures. It was only in late 2016 that Canada’s first hijab-wearing TV news anchor, Ginella Massa of Toronto’s CityNews, was cast. However, Massa serves as a role model for Muslim women all over the globe as she recently debuted her new CBC show Canada Tonight with Ginella Massa, which she describes as “basically a conversation with Canadians.” Ryerson School of Journalism alumna Zarqa Nawaz is another go-getter who has taken the burden upon herself and is doing an incredible job of putting Canadian-Muslim women on the map. With her work ranging from her personal creations of Little Mosque On the Prairie to her newest project Zarqa—in development with her own Regina-based production company FUNdamentalist Films—Nawaz is paving the way. In addition to being responsible for the conception of these two series, she will also be playing the lead in Zarqa, a show aiming to be the first mainstream Canadian comedy show told from the perspective of a Muslim woman.

As a journalism student in the heart of Toronto, I am surrounded by people from all walks of life and am constantly reminded of the variety in our world. I am dedicated to voicing the concerns of my nation as well as creating a positive and realistic image of my people. With aspirations as grand as mine, while identifying as a member of a stigmatized community, I’m cognizant of the fact that I have to work twice as hard. But I’m willing to do so. I will prove myself by following my dreams of becoming the very first hijab-wearing Muslim-Canadian talk-show host in Hollywood. I will strive to promote diversity and serve as an embodiment of hope, determination and possibility for future generations. As Academy Award winner Viola Davis says, “The only thing that separates women of colour from anyone else is opportunity.” I say it’s time to allow our people to access and maintain a platform. It’s time for real change and substantial advances to be taken. And it’s time to finally declare female Muslim representation.