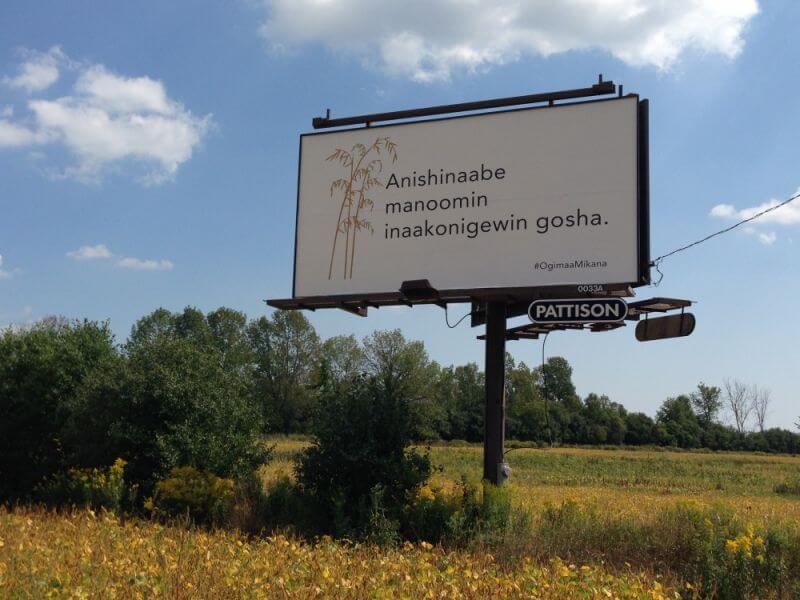 The Ogimaa Mikana Project aims to disrupt non-Indigenous Ontarians’ view of the land they occupy. As part of the project, billboards were erected across the Anishinaabeg territory—including Barrie, Toronto, Thunder Bay, and North Bay—to note Indigenous place names where settlers have taken over. “We are trying to promote the language, to centre and privilege it,” says project founder Susan Blight. (Photo courtesy of the Ogimaa Mikana Project.)

Every Canada Day long weekend, thousands of us leave smoggy cities and flood hurriedly north to summer homes. We can’t wait to escape to our little slice of paradise, our piece of the natural Canadian landscape we’ve dedicated to pleasure, relaxation, and tranquility. We spend the long weekend unplugged or revelling in one too many beers dockside pristine waterfront lakes, bounded only by bountiful forests and nature’s silence. Among the Great Canadian Outdoors, we celebrate Canada and the many wonderful things this country has to offer us. We launch fireworks, crush beer cans, or stare peacefully out into infinite skies with unabated pride. Cottaging has come to symbolize what the “good life” looks like to us, and celebrating Canada Day in the Great Canadian Outdoors is our patriotic practice.

But as we unwind in our Muskoka chairs this July 1 weekend, let’s take a moment to pause and consider the irony that is celebrating Canada Day on land that is so intimately connected to Indigenous communities and their land rights and losses. Let us consider that although Indigenous peoples played vital roles in early Canadian tourism as guides for hunters and other early travellers, they were systematically erased and relocated from land the government wanted to associate with parks and wilderness creation.

Take for example Algonquin Provincial Park and its surrounding “cottage country,” which today includes Barry’s Bay and Bancroft—home to thousands of Ontario cottages. This was land that the Golden Lake Algonquin never surrendered their rights to under treaty yet still were systematically displaced and removed from in the mid19th century, and consequently forced to live on unsustainable, overcrowded reserves. Since then, and until present day, the Algonquin continue to petition the government, insisting that they had neither surrendered this land nor been compensated for its loss. The land claim is still under negotiation 30 years after the process officially began in 1988 and remains a long way from settlement. There are countless examples of provincial parks and cottage country municipalities on which our cottages sit that is land Indigenous people never ceded territory to or were manipulated and shortchanged in the exchange.

Our cozy summer homes become even more problematic if we consider that some cottages actually sit directly on land leased by Indigenous groups to non-natives. In Ontario, for example, First Nations leased thousands of vacation homes to non-natives during the post-war period and built services that catered to these summer homes. In places like Sauble, Southampton, Hope Bay, or Crooked Lake, the docks we jump and swim from and the decks we barbecue and gather at are located directly on reservation land leased to us by Indigenous groups. You can call that an economic “opportunity” for Indigenous people to “make a buck,” or you can take the more historically informed opinion of Peter A. Stevens, who terms it a form of double colonialism. “After having lost their territories to European settlers and being forced onto reservations, First Nations [are] now leasing those reserve lands to the white descendants of their original colonizers,” he writes in an op-ed for ActiveHistory.ca in 2018. There comes a sense of great discomfort in such a realization, especially from the vantage point of a cottage home dedicated to all things comfort. We should all feel uneasy and troubled, or at the very least a little bit uncomfortable, that land we’ve purchased for the sole purpose of relaxation (for most of us, these are our second homes in addition to the homes and land we own in the city!), is the only land Indigenous communities have sovereignty over and yet are leasing to us, in most cases, out of economic necessity. Instead, around 2010, when many of the leases that were created post-war expired, and Indigenous groups failed to renew them, we settlers became outraged, upset, and emotionally fraught that our cottages—our slices of paradise—would cease and we’d be forced off the land.

You don’t even have to be outdoors overlooking the land from your Muskoka chair to reflect on the erasure of Indigeneity that takes place in Canadian cottage country. Those distinct Group of Seven paintings or prints many of us have adorning our cottage home walls—in bedrooms and in bathrooms—are another reminder of the intentional elimination of Indigenous peoples that has taken place across cottage country over hundreds of years. Have a look at any Group of Seven painting, and the Canadian landscape is depicted as pristine, untouched, and empty of all human and animal presence, explains Stevens in his oped. Yes, these paintings are iconic and beautiful, but viewed more critically, as some scholars argue, they also represent the erasure of Indigenous people who have lived for thousands of years in Canada’s wilderness landscape.

Some even argue, rightly so, that the Group of Seven’s fame produced a national art tradition that helped the Canadian government push an ethos that justified the removal of Indigenous communities in the name of wilderness creation and a “cottage country” vacant of human beings.

In a just world, Canada Day would represent a day dedicated to truth and reconciliation—a day devoted to the meaningful reflection on what we can do year-round as Canadians, personally, to contribute to the restoration of friendly relations between Canada and Indigenous peoples. It would cease to be a celebration of the Canadian government eliminating the jurisdiction and governance Indigenous people once had over their traditional territory, as it is today. For cottagers, this renewed celebration of truth and reconciliation might involve deepening our historical understanding of the land we love in all its complexity: researching and acknowledging whose land our summer homes occupy, learning about nearby reservations, and maybe even replacing Group of Seven paintings with local, contemporary, and historically accurate Indigenous art. Most significantly, this Canada Day long weekend, perhaps we cottagers can put down the beer and our smug sense of pride and begin to acknowledge (as Indigenous knowledge teaches) land as the sacred, living entity that it is, with its own rhythms and cycles, and us as mere stewards of the land, never owners. Perhaps this can be a first step in our search for truth and reconciliation from cottage country this Canada Day long weekend.