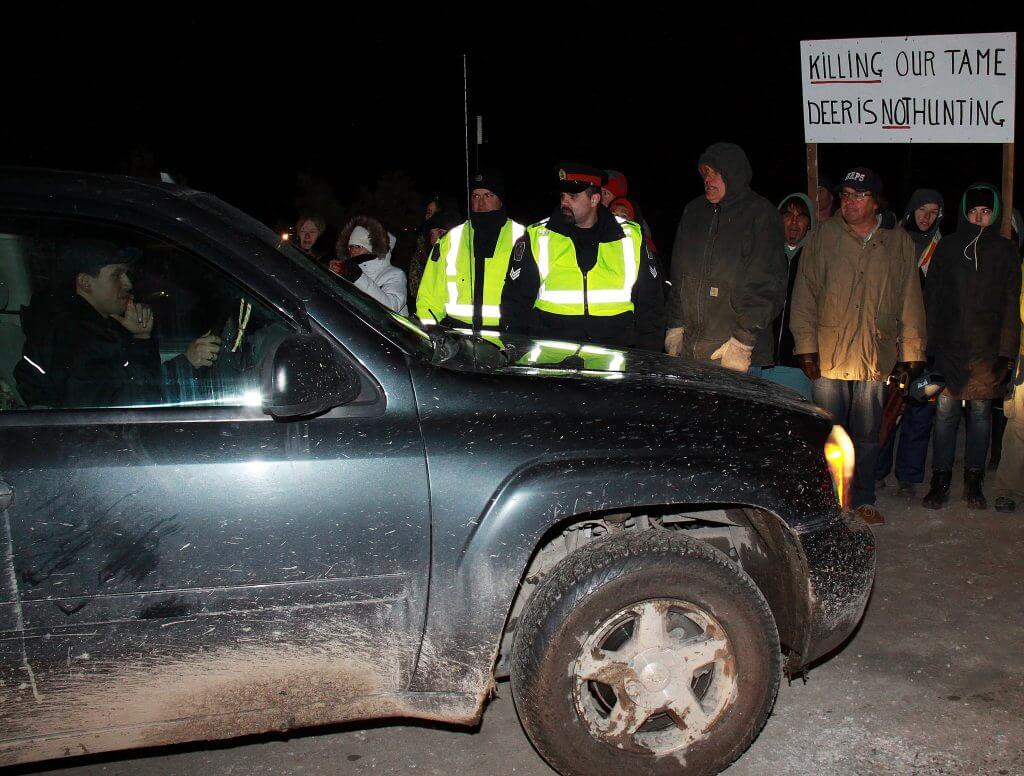 Last fall, Haudenosaunee hunters made their way to the forest with archery equipment for an annual six-day deer harvest. At Short Hills Provincial Park, just southwest of St. Catharines, Ont., the Haudenosaunee Confederacy and Ministry of Natural Resources and Forestry collaborated to create a safe space for the hunters. But despite the obvious government support, animal rights activists gathered to protest as cars entered and exited the park. The harvest is an important tradition, but many protesters may not realize the significance of the meat itself: the venison is a healthier and much more affordable meat for the community.

TREATY RIGHTS
The Treaty of Albany 1701, or Nanfan Treaty, gives Haudenosaunee people the right to hunt and fish in southwestern Ontario. But it wasn’t until 1982 that the Government of Ontario recognized and honoured treaty rights; before this, hunting in the area was done outside provincial law. Since 2013, the Short Hills deer harvest has given the Haudenosaunee people another opportunity to act on their right to hunt.

PROTESTS
Since the harvest’s first year, protesters have been known to yell racial slurs at harvest participants and shine spotlights at vehicles that enter the park, obstructing participants’ vision and compromising their safety. According to Paul Williams, member of the Haudenosaunee Wildlife and Habitat Authority, as of late, the majority of the protestors see the provincial park as a deer “sanctuary.” But during the past two years, there have also been counter-protests supporting treaty rights. To ensure the safety of everyone involved, park personnel and regional and provincial police have been present.

VIABLE VENISON
Through the harvest, Haudenosaunee hunters have access to lean venison, which is healthier than the processed, fatty meats many community members rely on. “Often, those [market] foods that are consumed are the ultra-processed kind—generally, ready to eat, ready to heat. We found that [Indigenous] people who consume more traditional food tend to consume less of the ultra-processed foods,” says Malek Batal, a principal investigator of the First Nations Food, Nutrition and Environment Study (FNFNES).

HEALTH REPORT
The FNFNES found that there are high rates of diabetes among Indigenous people living on reserve in Ontario. About 24 percent are living with diabetes, which is three times the national average. And consumption of processed foods, especially meat, is a factor contributing to high rates of diabetes and obesity. Batal suggests that issues with food security affect the development of obesity, which is a major risk factor for diabetes. “Food insecurity means you have access to high-energy, low-nutrient foods, because they’re cheaper,” says Batal. “When ultra-processed foods are available and affordable, you eat more of those kinds of foods, which means that you are more at risk for developing obesity.”

Much of this boils down to money. In 2014, the FNFNES reported that food security is a major issue. In Ontario, 29 percent of Indigenous households on-reserve experience food insecurity. About 23 percent of Indigenous households off-reserve experience food insecurity in comparison to about eight percent of Ontario households, which is also the national average. Comparatively, the average weekly cost of groceries for healthy meals is $247 for Indigenous communities in Ontario and $205 in Ottawa.