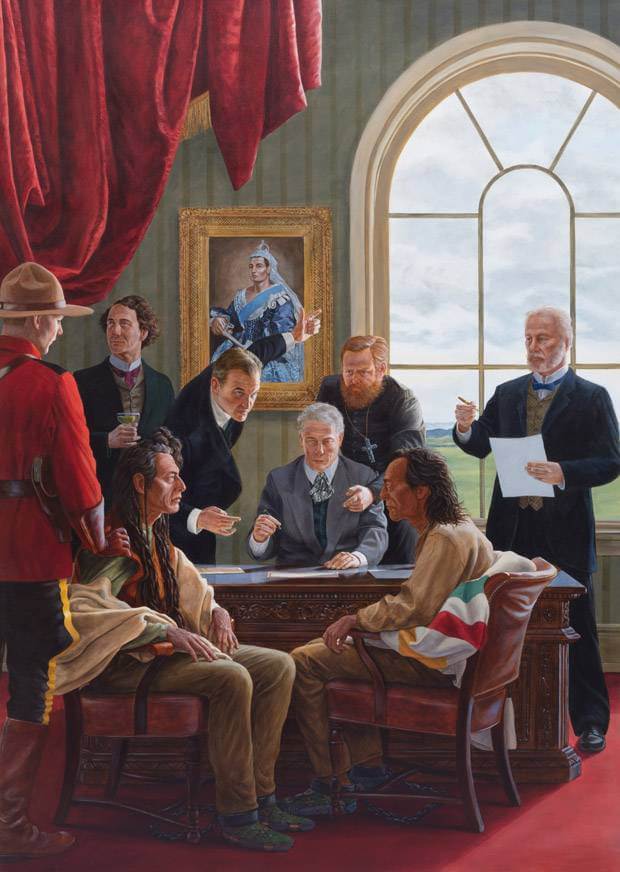 The unpunished killing of 22-year-old Cree man Colten Boushie in Saskatchewan has raised serious questions about the legacy of colonialism in shaping settlerIndigenous relations. Gerald Stanley, the white farmer who faced murder charges after shooting Boushie on his land, was ultimately acquitted by an all-white jury in February. Stanley’s acquittal fits into a long pattern of Indigenous life being treated as less valuable than settler safety in the Canadian justice system. Although Stanley’s lawyers did not argue that he killed Boushie in self-defence, the notion that Stanley was acting to defend his rural property from raiding Indians has taken deep root among his apologists.

Defenders repeatedly invoked the motif of the isolated farmstead. Writing to the St. John’s publication the Telegram, local resident Robert K. Noseworthy defended Stanley as “a good man, who was in his home, minding his own business, when his farm was invaded by strangers.” Branden Crowe, meanwhile, wrote an op-ed for Manitoba’s Westman Journal expressing confusion about the accusations of racism surrounding the trial, asserting that it “isn’t about race, it never was. It was about a man protecting his family.” Even some law enforcement officials have pushed the self-defence narrative. In a private Facebook group, a Royal Canadian Mounted Police officer allegedly mused that Boushie “got what he deserved” for breaking onto Stanley’s sacrosanct property.

That Stanley is seen by some as the victim is a product of Canada’s historical and contemporary culture of white supremacy, a culture that is continually replicated and reshaped by our political and cultural institutions. I do not use white supremacy to describe pockets of skinheads and Klansmen, but to describe the dominant, normative culture in colonial settler societies. In The Wretched of the Earth, Martinican psychiatrist and revolutionary Frantz Fanon observed that “the settler owes the fact of his very existence… to the colonial system.” Canadian white supremacy is a colonial system informed and reinforced by a constellation of narratives, symbols, beliefs, and behaviours that exist to justify and normalize the erasure of Indigenous peoples, the sanctity of private property, and the inevitability of European settlement.

One of the brighter stars in the colonial night sky is that of the pioneer past.

The pioneer stands tall and the frontier stretches wide in the Canadian imagination. The Anglo-Celtic settler, having undergone the trial of the Atlantic passage, enters the vaguely defined wilderness, where, through gumption and initiative, he claws a living from the earth. He sacrifices. He suffers. He builds a log cabin. His wife has 18 or so kids and churns a lot of butter. Through his toil the pioneer civilizes the bush, cleansing his soul and securing a covenant with the land. From the soil springs mills and general stores, taverns and churches. Naturally, he takes his rightful place at the head of table and community, a father-like role that he fills admirably. Under the banners of monarchy, Christianity, and empire, he has built something out of nothing—something to defend.

The pioneer is not bound by time or place, but by project. It is this adaptability that allows for the descendants of early 19th-century Irish immigrants in Ontario and 20th-century Ukrainian immigrants in Saskatchewan to imagine a shared past

All enduring mythic heroes need a foil, to test their resolve and provide an “Other” to define an identity against. In the case of the pioneer, his prime concern is his vulnerability to attacks from the wilderness’ natural ally: the Indian. The Indian is not a historical representation of any Indigenous Nation or individual but a part of the landscape to be civilized, Christianized. He is not only a prisoner of time, but imagination. Genocide and forced removal are shrouded by the advancing frontier, while Indigenous contributions to and maneuverings of Canadian society are downplayed. By compartmentalizing Indigenous history, the pioneer is able to usurp Indigenous land rights and justify his title. The land becomes his when tamed and worked; when it becomes his property. This line between civilized and uncivilized, white and “Other,” is what defines the process of pioneering.

The secret to the pioneer myth’s longevity is its elasticity. Shaped by the biblical United Empire Loyalist narrative of sacrifice, trial, and redemption, the myth of the pioneer is remarkably adaptable. As fresh waves of immigrants arrived in Canada in the 19th and 20th century, “Canadian” by necessity had to become a more inclusive concept.

No longer able to rely on the memories of a common national heritage, the idea of the frontier as a project collectively tamed by waves of pioneers shaped an accessible assimilation narrative. The pioneer is not bound by time or place, but by project. It is this adaptability that allows for the descendants of early 19th-century Irish immigrants in Ontario and 20th-century Ukrainian immigrants in Saskatchewan to imagine a shared past.

The rise of bilingualism, multiculturalism, the welfare state, urbanization, and increased Indigenous and Quebecois activism in the post-World War II era gave heartburn to Canadians who viewed themselves as inherently white and British. According to historian Daniel Francis, “until at least World War II the worship of the monarchy and the British Empire enjoyed almost cult status in Canadian society.” Massive cultural and demographic shifts were weathering British cultural pillars, causing a sense of existential crisis among traditionalists. Writing to the Globe and Mail in 1959, Ottawa resident Majorie Le Lacheur decried the “shocking mutilation” of Canadian history occurring in “the schools.” Five years later, columnist J. Bascom St. John wrote an article for the Globe and Mail titled “Teaching the History of Freedom,” arguing that “it is the British forms of law and liberty which underlie the whole Canadian political and legal structure, and without them we would be an enslaved people. It is the heritage and birthright of every child to know these things.” In a time of social and political fragmentation, many Canadians demanded that their history entrench their identity.

What emerged was a mythical golden age intended to motivate contemporary Canadians. Pioneer and living history museums in Canada are among the most effective purveyors of a mythical past, a vision of Canada defined by stability, compromise, and consent. In the 1950s and ’60s, many Canadian community museums began to establish themselves as pioneer history museums. Common among these museums were nostalgic and anti-modern interpretations of the past that downplayed dissent, and celebrations of ahistorical ideals like the existence of a unified folk. While reviewing Upper Canada Village, journalist Wilfred List describes how “the moment the visitor enters the village he leaves behind the hurry and tension of modern life for the tranquility of a pioneer community that is a living legacy of our past”—a past that was apparently nothing but hoop skirts, barn raisings, stern school mistresses, wagon rides, quilt festivals, and village-made souvenirs and historic ale tastings.

Much in the way that Gone with the Wind’s audience is encouraged to admire Scarlet O’Hara’s resilience while overlooking her status as a slave owner, pioneer museum attendees are told of the settler’s effort and ingenuity, typically exemplified by the life stories of local “self-made men.” Discussions of political and ethnic violence, racial discrimination, displacement, genocide, child labour, infant mortality, urban slums, and workhouses are omitted for the sake of wool shearing, period-dance demonstrations, and cookie consumption. At a meeting of museum curators in 1954, former Ontario Historical Society president Louis Blake Duff described the pioneer period as a time “in which men and women had purpose, perseverance, thrift, and sincerity, qualities not as prevalent in our own age.” By presenting their British past as pure, wholesome, and constructive, advocates drew a tacit, invisible line that separated the true inheritors of Canadian culture from the new existentially threatening interlopers and pretenders.

Why do Canadians identify as a hardy, northern people? Why do we use certain ideas, language, and motifs to define our land as worked and protected? Why is it so easy for some Canadians to envision Gerald Stanley’s rosy homestead on the modern frontier under attack?

Although the pioneer today may seem like a cultural relic of past anxieties, his ideas continue to shape how Canadians view progress and history. In 2011, the University of Manitoba attempted to differentiate itself from other universities across the country by launching an advertising campaign that emphasized its output of pioneers, adventurers, and trailblazers. The York Pioneer and Historical Society continues to display their log cabin at the Canadian National Exhibition, while the Canadian Encyclopedia article on pioneer life uncritically states that “persistence, optimism, thrift, resourcefulness, and the acceptance of unremitting hard work became character traits valued by succeeding generations long after pioneer conditions had passed.” At Butter Tarts and Buggies, a tourist experience in Ontario, visitors can “explore the simple life.” In 2014 the National Post ran an article about “modern settlers” in the Yukon, where “pioneers” are able to “carve their livelihood out of the wilderness.” Perhaps the most nakedly colonial, Pioneers Canada sends volunteers to preach the good word abroad “among peoples who are confused about what they actually believe—those who are steeped in folk religions.”

While such language and beliefs may seem innocuous, they shelter unresolved legacies of colonialism, providing ammunition to those who uphold the status quo. Attacks on the pioneer tend to elicit hostile reactions from those who draw their identity from these ancestral stump-pullers. This can range from coded comments—those you’d see your uncle making on Facebook—to avowed, explicit racism. Last year, Windsor Star columnist Gord Henderson wrote that “pillars of correctness” have caused Canadians to go from being hardy pioneers to a country “consumed by self-loathing.” On the more extreme end of the spectrum, in a 2016 article University of New Brunswick professor Ricardo Duchesne argues that “almost all the men and women who came to Canada from the British Isles and elsewhere in Europe, and, if you like, from British America, before 1914, were pioneers, not immigrants.” Elsewhere, Duchesne has described Canada as being in “decay,” claiming that multiculturalism is a covert plot to wipe out the white race by the globalist left. The sense of entitlement and hostility to the “Other” articulated by Henderson and Duchesne makes playing hoop rolling on the minister’s lawn seem a little less quaint.

Why do Canadians identify as a hardy, northern people? Why do we use certain ideas, language, and motifs to define our land as worked and protected? Why is it so easy for some Canadians to envision Gerald Stanley’s rosy homestead on the modern frontier under attack?

Because we are conditioned to think of Canada’s colonial history as an idyllic morality play. According to a 2003 survey by The Pasts Collective, museums are Canadians’ most trusted source of historical information. Pioneer history museums continue to be a mainstay of Canadian field trips and family outings, and are considered a rite of passage in many areas. The silence on difficult history muddies the origins of problems facing contemporary Canadians, allowing contented visitors to imagine that they live in a just society with wholesome, didactic roots. That makes pioneer history and its purveyors not just complicit, but active in reinforcing a vision of our colonial society that values settler and Indigenous life differently.