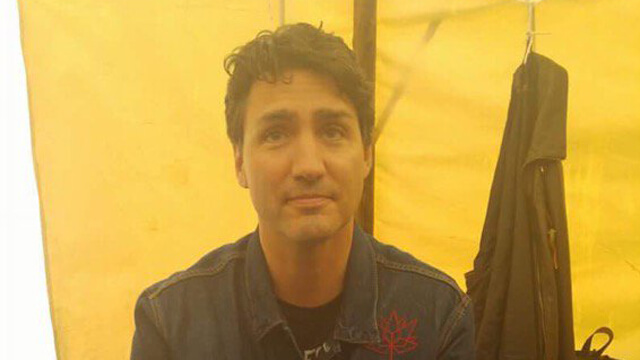 Trudeau inside a ceremonial teepee on Parliament Hill during Canada Day 2017. Photo courtesy of Russ Diabo.

Just last year, Prime Minister Justin Trudeau said: “No relationship is more important to our government and to Canada than the one with Indigenous peoples.” He promised a renewed nation-to-nation relationship—one that would uphold the treaties and constitutionally protected rights of Indigenous people while fixing the many socioeconomic crises that often plague Indigenous communities. He also promised to implement all 94 calls to action urged by the Truth and Reconciliation Commission. But so far, Trudeau has failed to deliver.

After his election victory in October 2015, Trudeau vowed to put an end to the two percent funding cap that was imposed by Jean Chrétien’s Liberal government in 1996. For almost 20 years, funding for First Nations programs and services could only increase by two percent each year—a policy that doesn’t take into consideration rising inflation and a growing First Nations population. But in the 2016 budget, which promised Indigenous communities $8.4 billion over five years, and in the 2017 budget, offering an additional $3.4 billion over another five years, the funding cap remains in place. A policy such as this one not only diminishes the humanity of Indigenous people, it places a stranglehold on communities that already lack the most basic services.

The next big promise was a national inquiry into missing and murdered Indigenous women and girls. Trudeau made good on his promise, launching the inquiry in September 2016. But its commission has come under intense scrutiny for its lack of progress and poor communication with families. As of March 2017, there were only 122 family members in the commission’s database, despite being halfway through its two-year mandate. To make matters worse, several senior staffers, including the director of operations, have already left the commission.

Trudeau’s Liberals also promised to end the water crisis on roughly 90 reserves experiencing drinking water advisories, which have persisted for decades in some cases. The 2016 budget included investments of $1.8 billion in clean drinking water and wastewater systems in Indigenous communities over five years. While this sounds promising, Human Rights Watch reported that this financial commitment will not solve operation and maintenance costs that come up to an extra $419 million per year. An additional 2011 report from Indigenous and Northern Affairs Canada found that $4.7 billion over 10 years would be needed to bring water systems up to a sustainable standard.

On a brighter note, Trudeau fulfilled his promise of new funding for the preservation of Indigenous languages and cultures. The 2016 budget included $76.9 million to support cultural initiatives on reserves over a two-year period. The majority of Canada’s Indigenous languages are endangered due to Canada’s history of colonization and oppression, so this could be great step toward revitalization. Another promise to develop a Métis Nation economic development strategy has been upheld; the 2016 budget provided $25 million over five years to support the nation.

But these positive developments have been undermined and overshadowed by Trudeau’s approval of Kinder Morgan’s Trans Mountain pipeline expansion project, the Keystone XL pipeline, Pacific NorthWest LNG project, and the Site C dam. All four projects shatter any type of nation-to-nation relationship Trudeau had in mind. The Site C dam in British Columbia’s Peace River Valley will flood First Nations territory. Elsewhere, other First Nations worry about oil spills that could cause food and water contamination. Trudeau’s unwavering approval of these projects also contradicts the United Nations Declaration on the Rights of Indigenous Peoples, adopted by the Canadian government last year and requiring that the government obtain the free and informed consent of Indigenous people prior to any project affecting their lands.

Trudeau can no longer scrape by with prime ministerial tweets and tokenistic gestures in the hopes that they might somehow solve the problems at hand. Indigenous people, and upcoming generations, want more than “a place to store their canoes and paddles so they can connect back out on the land,” as Trudeau said back in January. At least Stephen Harper was up front about his assimilationist agenda. Trudeau promised us hope and then turned his back on us.