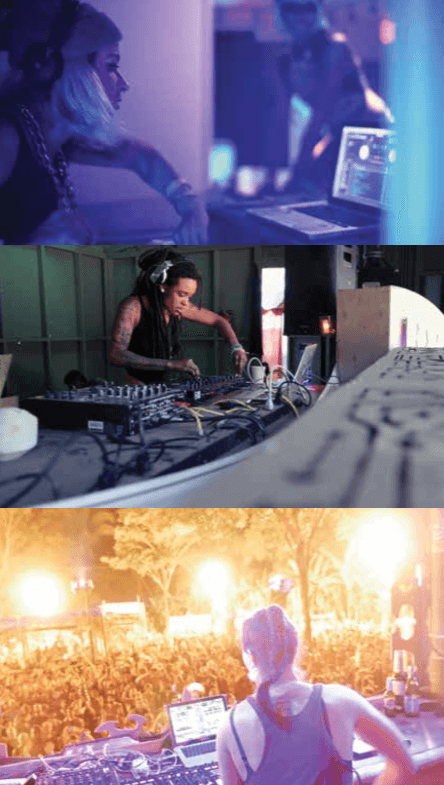 What unique perspective do women bring to the arts?

This is the question west-coast filmmakers Ian MacKenzie and Nicole Sorochan want their audience to think about, especially within the realm of female DJs with their transmedia project, Amplify Her.

Through a documentary-style, feature-length film, a graphic novel, and a motion comic series, Amplify Her tells the story of seven female electronic artists making their way and growing as musicians in an otherwise male-dominated industry. The project’s mandate is to recognize the distinct qualities women bring to the electronic scene.

What started as the brainchild of MacKenzie as part of his mission to “uncover and amplify stories of the emerging paradigm” soon turned into something much larger when Sorochan came on board after learning that the project would celebrate these women rather than asking why there aren’t more of them in their industry. “I think many women today are tired of that question,” says Sorochan. It’s this refreshing perspective that allows the project to not only focus on what DJs like Blondtron, AppleCat, and Lux Moderna uniquely bring to the table, but also bring to light how these women are expressing sexuality, body positivity, and gender diversity through their art. Moreover, when the graphic novel was put into production, various artists came together and “it created a safe environment for women to share their talent, collaborate with other women, and shine a light on the value they each bring to the world through story,” says Sorochan.

Amplify Her has toured across the west coast in Canada, the U.S., and Australia. Sorochan says she’s been ecstatic with the response from viewers, especially those from audience members who say they can identify with the film. And while there are no current plans to add more elements to Amplify Her, Sorochan is currently focused on securing more screenings to reach different audiences, inspire more women, and provide meaningful discussion.