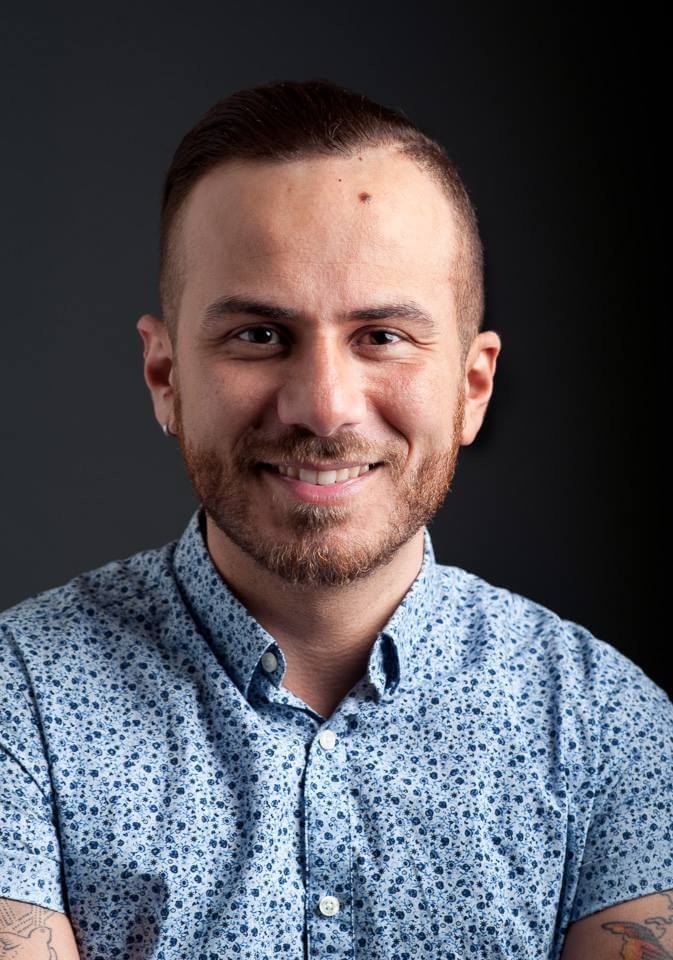 Like the protagonist in his book, The Clothesline Swing, Ahmad Danny Ramadan is a hakawati, a storyteller, at heart. He has listened to countless tales of hardship and love, and has carefully crafted his own novel—and life—around them. From his house in war-torn Damascus to the pride parade in Vancouver, he has dedicated much of his life to making a difference in the LGBTQ-refugee community.

Ramadan is Syrian-Canadian author, journalist, public speaker and LGBTQ-refugee activist living in Vancouver. He volunteers with the Rainbow Refugee Society, helping to bring LGBTQ-refugees to Canada. His annual fundraiser, “An Evening in Damascus,” has raised over $100, 000 in support of refugees since 2015. For his efforts, he was the Grand Marshal for the Vancouver Gay Pride Parade in 2016.

The Clothesline Swing, his most recent novel published in May 2017, explores the life of a storyteller and his dying partner, dealing with the aftermath of the Arab Spring. With Death lurking in the background, the protagonist shares stories each night of his childhood in Damascus, of the homophobia he faced in Syria, of war, and how he met his partner. His next book, The Foghorn, is expected in 2019.

This spoke with Ramadan about his experiences with refugees, his writing, and more.

You left Syria in 2012 for Lebanon and arrived in Vancouver in 2014. Why did you leave when you did, and what was your life like before you came to Canada?

I left Syria when I was 19, travelled a bit from the Middle East, and went back to Syria in 2011, specifically because I wanted to be part of the revolution against the regime of [Syrian president] Bashar al-Assad. At the time, the revolution was led by free thinkers and social justice activists—folks who really wanted to change the country from the dictatorship that it has been under for 40 years, to a democracy, the way that Syria was in the early 1950s and ’60s.

I found myself quite interested in representing the lesbian, gay, and bisexual, trans [and queer] (LGBTQ) community. I found the community had been struggling quite a lot because the Iraq war around Syria denies any kind of information from accessing the country and denies people who identify outside of the social norms from understanding their own identities to begin with. I was fortunate enough to be travelling around the world to know more about what happened within the queer community, and I wanted to spread that knowledge.

I turned my house [in Damascus] into an underground LGBTQ centre where I was sharing this knowledge. We had a lot of gathering circles where everybody shared their stories, whatever they were comfortable sharing. We had an illegal movie download night, where we downloaded new and illegal movies to watch together. We had playing card tournaments, chess tournaments, and party nights. It was it was actually quite the loving community until I was arrested for it. Part of my terms of release was that I had to leave the country, so I left Syria in 2012.

How long were you in jail?

I used to be a journalist back in Lebanon, Syria, and Egypt, so I ended up being hired by the Washington Post, which helped me avoid ending up in a refugee camp somewhere. I ended up living in my own little apartment, which slowly but surely turned into an extension of the house that I used to own in Damascus. It became this beautiful place where a lot of folks with refugee experience would come crash for a while, until they could stand on their own two feet.

A lot of queer folks, a lot of lesbians and gay people would hang out in my space and find refuge there. It was it was a very eye-opening kind of experience: You hear all of those beautiful stories and you connect with all of those beautiful people, and at the same time you are faced with the xenophobia of some—not all—of the Lebanese folks (which, to be honest, is an understandable reaction towards the Syrian refugees because Lebanon is a tiny country). You can fit five Lebanon’s on Vancouver Island, and then two million Syrian refugees just cross the borders into it. Basically there are almost as many refugees as people in the country.

Imagine if Canada had 35 million refugees landing here overnight. It would cause a lot of reaction from the community and it would be an understandable reaction because that’s a huge number of people. So I understand why I was seen as a foreigner and I understand how they reacted to that. But at the same time, I created that safe space for myself and I managed to survive in it.

With the recent influx of Syrian refugees in Canada, is that same response an understandable one?

It’s a different circumstance. We’re talking about, I don’t know, 40,000 or 50,000 refugees who came here to Canada, mostly from minority groups, and all of them through legal ways. Nobody swam across the ocean to come here. So it’s not an understandable reaction here in Canada. I haven’t actually seen that strong of a reaction against the Syrian refugees. If anything, the Canadian people were quite welcoming and continue to be welcoming of Syrian refugees.

If the same reaction came through, it would be difficult to understand, because the Canadian community is a one that is based on many immigrants coming here and settling on the lands of the First Nations people. Welcoming new immigrants and opening the doors for folks is what made Canada the beautiful country that it is.

So you think we should keep our doors open?

If anything, we should open the doors even more. There are seven million refugees at the moment in host countries across the world. Countries that are designated as first-world countries took only one or two percent of that number. So it’s a drop in the bucket. Most of the refugees that left because of the civil war in Syria ended up in Turkey, Lebanon, Egypt, and Jordan. And those are countries with their own challenges, and they don’t have the resources or the ability to support all of those refugees. Here in Canada we actually do. And we actually need them. We need new refugees. I’ve supported 22 refugees since I came here, and every single one of them is paying their taxes; they’ve got jobs, are getting to know the communities here, renting houses and adding to the economy, and bringing their beautiful stories to Canada.

How does the experience differ for LGBTQ refugees?

When you’re a queer or trans refugee, the easiest challenge to face is that when you come here, you don’t have a community to belong to. If a family of say, four—a father and a mother and their two children—ended up here in Vancouver, they will find support from the community that arrived here before them. Many Syrian immigrants who came here ages ago or who arrived a year or two ago form communities, they can get to know each other. They can have a social structure that is similar to their homes, which will ease the burden of the integration experience.

But a queer person who wants to live their full identity can’t actually belong to the same community. They can’t go to the Syrian communities and say, “I’m queer,” because the same community will bring with them the homophobia that is a part of the Syrian tradition. Which is not to say that this is acceptable, but it is the reality of things. I always felt like an outsider in Damascus as a queer person. So I carry with me the trauma of feeling like an outsider throughout my life, and that is challenging and changes how I’ve dealt with the refugee experience.

How do we end any stigma towards refugees?

Read our literature. Eat our food. Get to know who we are. Start to regard it as an interesting and productive part of the Canadian community. Recognize that we are trying our best and we’re not coming here to be a charity case, we’re coming here to become bigger than who we are and to become something beautiful.

Could you touch on your experience with the Rainbow Refugee Society?

I saw a lot of challenges in my first year here in the Vancouver, and the members of the Rainbow Refugee Society are the people who stood by me, who carried me forward, and who helped me get where I am at the moment, so I carry that that privilege and that good will of them forward.

I also run an annual fundraiser called “An Evening in Damascus.” It’s going to happen for its fourth year this coming July. It is a way to introduce the Vancouver community to what it means to be Syrian, and to change the mainstream narrative from civil war, desert, bearded men, beheadings, and all that horribleness, to a culture of beautiful music, yummy food, lovely dancing, storytelling, and spices. And to get them to donate a lot of money so I can sponsor some refugees.

What role, if any, does your book, The Clothesline Swing, play in your activism?

I’m a person of many hats, and one of my hats is that I am an author. I see myself as an author and as an activist, and I believe that my identity as a queer person of colour with a refugee experience informs both sides of my personality. But I wrote the book because I thought of a great story that I wanted to tell, and I do activism because I felt a great cause that I can support. So I think the only connection between the two is really my identity and how it forms the work that I do and the structure I want to put into my life.

How much of it was shaped by your own experience?

It’s modelled after my own journey. I would say it is a fictional telling of many true events, but those true events are not necessarily mine. I have met many queer and trans refugees from Syria, who shared with me many beautiful stories, and the book has a lot of resilience, a lot of courage, and I can’t claim that to myself. I dedicated the book to the people who shared their stories with me.

You are in the process of writing your next book. Will it share the same concepts as Clothesline Swing?

I am quite comfortable being typecast as a gay author. I have four books in my mind. The Clothesline Swing is the first of them. The Foghorn is my second book, and all of the books will be led by queer people from Syria with refugee experience. It’s the Damascus apocalypse and it is going to be told.