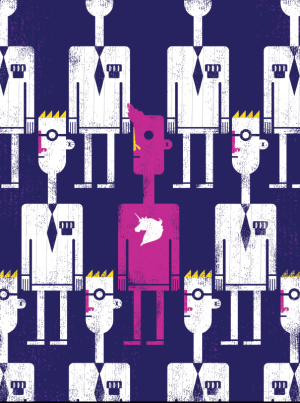 Straight, white men still dominate the technology industry. RM Vaughan introduces us to LGBTQ activists around the world who are fighting for change

STUART CAMERON REMEMBERS the first time Unicorns in Tech set up a booth at a major tech/IT conference. “People would stop and see ‘Unicorns’ and think, ‘Oh that looks like fun,’ and then see the subtitle, ‘LGBTQ in Tech,’ and run away! Or ask us why we were there. It was really terrible to see this reaction.” And that was only a few years ago, in very queer Berlin. As a Canadian who has lived in Berlin on and off for years, and who finds the city almost too informal and relaxed, to the point of difference-denying, I found this shocking. My first impulse was to be very Canadian about the story and become righteously indignant. And then Cameron started laughing. Sitting in his sunny Berlin apartment/office/hub with his two 20-something co-workers, the anecdote seems ridiculous to him, a story from a previous generation.

But the ugly truth of the tech/IT industry—that it is still overwhelmingly dominated by straight, white men—hangs over our giggling like a grey cloud. Despite its reputation for being the innovative and inclusive industry that propels our vaunted new Information Economy, most of the tech/IT world looks like the same old boys club. “The gear and the knowledge have changed,” Cameron notes with a shrug, “but the head office looks like 1975, not 2015. In terms of real representation, and money and decision-making power, we’re not even close to where we should be, especially since queers and women have always been present in the industry.”

Cameron, along with Jasmin Meiling and Marty Gormley, are the producers of Berlin’s massive Sticks & Stones, an annual LGBTQ-centric tech/IT Karrieremesse (a perfectly German word for this hybrid conference, career fair and party) that opens its sixth edition in June. From the funds that S&S brings in, the group puts together Unicorns in Tech events. Unicorns in Tech has a simple goal: to create events and meeting spaces in Berlin (and eventually elsewhere) where queers and their allies who are working in tech/IT can network and share information in safety.

Yes, safety. As Cameron points out, “in Berlin, tech is white and male and straight. There is still a shocking reaction of homophobia in that world. And, how does business work? It is built by networking and social circles: So why can’t queers make a ‘club’ the way straight men do?”

But it doesn’t stop at Unicorns in Tech. In May, S&S will launch #UNIT Festival, the world’s first queer tech festival, featuring over 40 speakers, performances, and art from all over the world all in one massive space. If Cameron is building an empire, it’s one that needs building. “We are trying to show the tech community that queers are a large community, a powerful community, and that we don’t want to just hear about ‘diversity’—we will instead make our own world.”

Angie Tsaros, a Berlin-based activist and co-founder of a monthly feminist crafting/gathering, puts it more bluntly. “I used to go to tech conferences and panel discussions and try to participate, but I’m a queer woman who does not look like a business woman, and it’s just too ridiculous to try to talk to a room full of expensive suits. I don’t belong there and they let me know that I don’t belong there very quickly.”
Why is the tech world so backward? Why does an industry based on knowledge sharing still need conferences and advocacy groups to teach them the basic values of diversity? Forget altruism, doesn’t everybody know now that being inclusive is profitable?

“Big tech has stopped pursuing diversity because now they know the right language and how to say the right things, so that they feel they have done their job just by talking about it. Also, when they talk about diversity, you never see any numbers for LGBTQ people,” Cameron shrugs. “I think it is better in North America than it is in Europe. When you tell European straight people you have a queer tech group, they think you are making pornography.”

It’s difficult to say, though, whether it is, in fact, better here. According to Canada’s Top 100, an annual list of businesses that acts as a guide to the “best places to work” in Canada, the “Best Diversity Employers” of 2014 (a list that marks LGBTQ inclusion) has everything from provincial governments to agri-business, all of whom, of course, rely heavily on tech workers. But there are no tech companies or startups
on the list.

Lukas Blakk, a Canadian tech expert who lives and works in San Francisco, and an old pal, recently spoke at a Unicorns in Tech gathering sponsored by SoundCloud. Blakk’s topic was a program Blakk created, in co-operation with a former employer, to build funded, safe spaces for marginalized people to learn how to code and thus gain entry to work in the tech field. The program was a stunning success, and several of the participants are now working in tech.

“Giving people space where they won’t be judged or feel excluded sounds obvious,” Blakk tells me one day while we hike up a massive canyon outside of San Francisco, chased by Blakk’s corgi Shortstack, “but it’s pretty rare. Some of the participants were living without permanent housing, and/or were gender-variant, or single mothers, and/or were underemployed—all people who have these amazing skills that they use every day just to get by. All we had to do was provide the space and the equipment.”

Blakk’s talk at Unicorns in Tech was well received, but Blakk is keenly aware of the pitfalls when social justice meets corporate profits. SoundCloud, the sponsor of the talk, is, after all, a third-party partner with Twitter and iTunes and is valued at between $1-2 billion (depending on which cranky music business executive you ask).

“Events that are purely social and don’t try to leverage the good fortune of being in a very competitive (read: well-paying) industry serve no tangible purpose for the marginalized community members who don’t have access,” Blakk emails me after the talk.

“Social get-togethers allow the company paying the bill to wash their hands of any actual accountability for changes in hiring practices, corporate culture, and civic responsibility,” Blakk continues. “It also lets attendees off the hook where they are being photographed and used as marketing for a very mainstream and privileged, top one percent agenda. Those who need jobs, access to better life quality, are in no way changed or helped by these types of events. I prefer hackathons and learning opportunities so that those who have are sharing back to those who don’t, yet. That, to me, is our responsibility to each other and how we make truly authentic community with others who share our marginalized identities.”

I put the same question to Cameron, and he welcomes it. “When I go to big tech events, I have to do so much explaining about who I am first. I feel safe, physically safe, but not maybe socially safe. I don’t think, however, in Germany, that companies are looking at what we do as a new way to make profits. For Sticks & Stones, companies have to apply to us and prove to us that they have good codes of conduct to protect queers before they can present. So, we profit off of them! What I have is a problem with companies selling products to the queer community, but they do nothing to improve their queer numbers. I hate that. Things are slower in Germany, and everybody here in tech checks to see what the U.S. companies are doing first.”

The core question of safety and, more importantly, of creating queer-inclusive spaces to thrive, remains mostly unanswered—even in Canada. In 2013, for instance, the Information Technology Association of Canada released a damning report on the representation of women in communications technology companies. The percentage of female-identified people on the boards of Canada’s largest tech companies was a mere 16.5 per cent. While there are no parallel statistics for LGBT representation, one imagines it is not much better. Queers-in-tech social groups come and go but appear, (unlike, say, HackerNest, a wildly successful, now international tech social gathering and information sharing group started in Toronto) to receive no corporate sponsorships. That’s not to knock HackerNest. Its open forum style and mission to spread prosperity via technology-sharing attracts a very diverse group of enthusiasts, even if LGBTQ participation is not specifically noted in the group’s PR.

Socializing and networking have value, actual handson activism has a deeper value, but the industry has a long way to go, and both Cameron and Blakk are still very much outsiders trying to bring change to a resistant monolith. “Being one of very few queer people in a company can sometimes feel lonely”, Blakk writes, “[Tech companies] need HR to make this sort of morale-building a priority to the level where people feel they can spend a few work hours a month on projects that improve the culture both inside the company but also build up connections with the larger community around us.”

A bitter irony of the tech boom is that companies tend to choose cities with high “gay indexes” (thanks again, Richard Florida), for their obvious cultural value, and then the actual workers displace the queers who make the city so interesting. It’s been going on for years in San Francisco, and has now reached the point, Blakk says, wherein “the SF tech world is primarily straight and male and it’s disrupting SF itself. We’ve got some amazing history here and people trying to stay here even as houses are being flipped out from under them.”

Berlin, with its low property costs and vibrant culture, is also quickly becoming a new tech wonderland. SoundCloud is based in Berlin, as is EyeEm, Wunderlist, and DeliveryHero, among others. It is also a start-up city for European tech entrepreneurs. And Berlin hosts the annual CEO-packed Tech Open Air festival. Subsequently, Berliners cannot stop talking, in increasingly panicked tones, about the rapid gentrification of their city. In the neighbourhood I live in, on the streets Isherwood once walked, cafes, bars, bookstores, and clubs are being replaced by kindergartens, modular furniture outlets, and“yummy mummy” clothing stores.

Cameron worries about the future he is partially helping to build as well. “The big thing is for the LGBTQ community to look at how we treat other groups ourselves. We have our own problems with sexism and racism, so until we fix our behaviour we can’t fix the behaviour of others. And of course sometimes straight people become interested in what you are building and then gradually take it over, away from you. But that will not happen as long as I can help it.”

Blakk offers a more blunt assessment. “Tech is supposed to be this ‘break all the rules’ industry that’s doing things differently but from most angles it doesn’t look that much different than the wolves on Wall Street I believe they (we) can do better.”