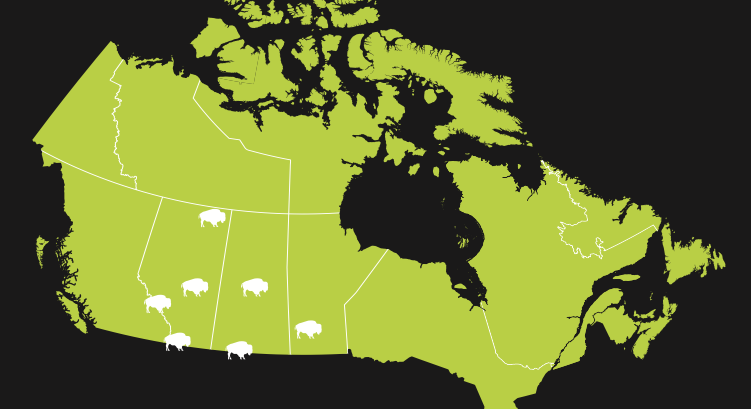 There was a time when close to 30 million bison roamed the plains of what is now Canada and the United States. In the mid-1800s, after the influx of European settlers, the animal—once the most abundant large mammal on the continent—was hunted to near extinction.

But the bison has returned to Canada’s oldest national park. On February 1, 2017, after a 148-year absence from Banff National Park, 16 bison were successfully reintroduced to the park’s Panther Valley. They were delivered from Elk Island National Park on Treaty 7 territory, where there’s a herd of about 450 bison.

The five-year pilot project by Parks Canada will monitor the bison for 16 months in an enclosed pasture. Eventually, the bison will be able to roam a 1,200-square-kilometre area and interact with the wildlife around them.

The importance of the bison to Indigenous culture around Banff stretches back thousands of years. The Stoney Nakoda, Blackfoot, and Plains Cree people used every part of the buffalo, the name used in Indigenous society. The buffalo was, and remains, an important source of food, clothing, and cultural ceremony. In 2014, First Nations from Canada and Indigenous tribes from the United States came together to sign the Buffalo Treaty, an alliance consisting of 22 communities that supports buffalo conservation.

The significance of bison to Indigenous groups was one of the factors in their extermination.

Sir John A. Macdonald viewed over-hunting as a way to starve the Indigenous population by forcing them onto reserves. With bison still around, Macdonald believed Indigenous people would not willingly move onto small plots of land. When Banff became a park in 1885, the Stoney Nakoda were excluded from their traditional lands.

Bringing back bison means returning a crucial aspect of the ecosystem. Bison are considered a “keystone species”: their presence, or lack thereof, in an ecosystem drastically affects other life. Their fur, considered one of the warmest among animals in North America, helps birds flourish by insulating their nests. Their heavy hoof prints become pockets for rainwater, feeding the likes of insects and other small animals.

All signs point to a successful adaptation—the Banff herd is picking its leaders in what is usually a matriarchal society. Between April and May 2017, the herd gave birth to 10 bison calves.