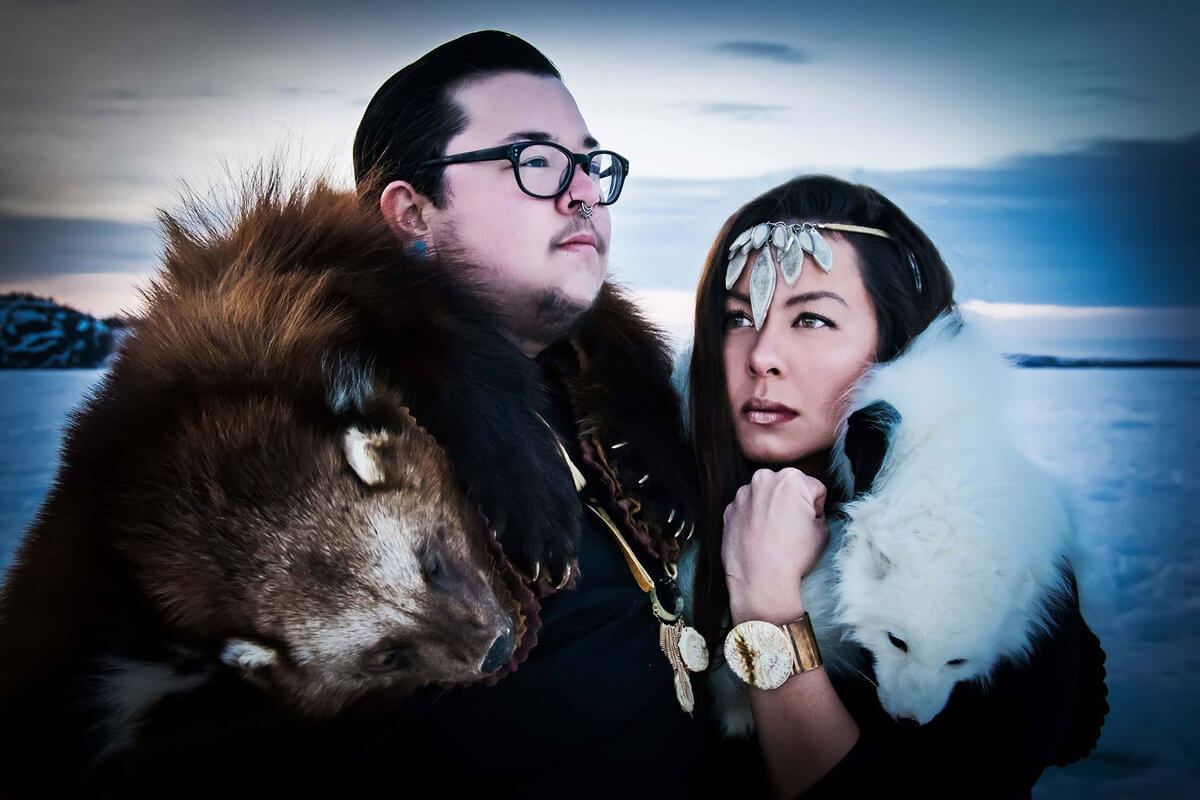 There’s a running joke in the Northwest Territories that you need to travel outside the Arctic to hang out with your neighbours. That was the case for Yellowknife artists Greyson Gritt and Tiffany Ayalik, who first met a few years ago at the Northern Scene festival in Ottawa. Their spontaneous partnership soon became Quantum Tangle—a two-person performance group blending song, storytelling, movement, and spoken word.

The group’s name refers to American blood quantum laws, legislation enacted by settlers that determines who gets Indigenous status, regardless of how people with Indigenous ancestry self-identify. Since both Quantum Tangle’s members come from blended Indigenous backgrounds—Gritt is Ojibway-Métis and Ayalik is half-Inuk—they are affected by similar colonial systems in Canada, including Bill C-31, which designates or denies Indigenous peoples a hierarchy of status depending on their parentage and generation.

Quantum Tangle’s show Blended Background Blues is a tapestry of art forms, dealing with issues of identity, assimilation, and belonging. Gritt shares deeply personal anecdotes about their family history and Ayalik performs traditional Inuit legends she learned from Elders across the Arctic. Quantum Tangle songs harmoniously blend Blues guitar with Gritt’s soulful voice and Ayalik’s throat singing, harmonies, and dance. On the title track of their EP Tiny Hands they sing, “What have you seen in your short long life?/ What has your heart overcome?/ The traditional ways that are hidden away/ Can be revived by the beat of a drum.”

“I definitely see our performance as a release to be able to talk about these difficult or sometimes even political issues in this beautiful manner,” says Gritt. “It’s an amazing way to connect with folks who are either on the same page, or even more importantly, who aren’t on the same page or don’t even know what you’re talking about.”

The tone of Quantum Tangle’s performance is always shifting, wavering between playful and serious, depending on how audience members respond to the subjects being tackled. In one part of the show, the pair uses a loop pedal to overlay their voices repeating all the prejudiced things that have been said to them about their identities. It usually receives a mixed reaction from the crowd: sighs and uncomfortable laughs, or louder laughs of recognition from those audience members who have heard the same comments countless times. The segment also acknowledges the way Indigenous people may have internalized those same thoughts. “I personally have said some very prejudiced things in my life,” says Gritt. “It’s a product of living in a colonized society and of not always knowing your roots.”

This is a big year for Quantum Tangle. Their first record won Indigenous album of the year at the Juno Awards and they released their second album, Shelter as we go…, in July. The group toured Europe in the spring and is playing throughout Ontario and Nunavut in the summer. This fall, Quantum Tangle will be directing the music for a nationwide Canada 150 comedy show with Mary Walsh and touring the country again with other artists from the territories. Ayalik is thrilled Quantum Tangle’s success is coming at what feels like a pivotal moment for Indigenous arts and culture in Canada. “It’s so exciting to be a small part of this huge mosaic across the country where Indigenous people are really letting go of shame and things that have kept them from their cultural practices in the past,” she says. “Whether it’s through a visual medium, dance, theatre, or writing, it’s pretty exciting to see that come through art in a big way.”

The pair hopes their work and success inspires the next generation of artists coming from marginalized backgrounds. “We are walking Venn diagrams of all these identities and experience all these intersecting joys and oppressions,” says Gritt. “It’s important for us to show the world that you can be Indigenous, queer, transgender, and from a small town. People might think they don’t have the right or the resources to do what they want to do, but we just want to keep reminding folks that you can do it, we love you and we believe in you.”