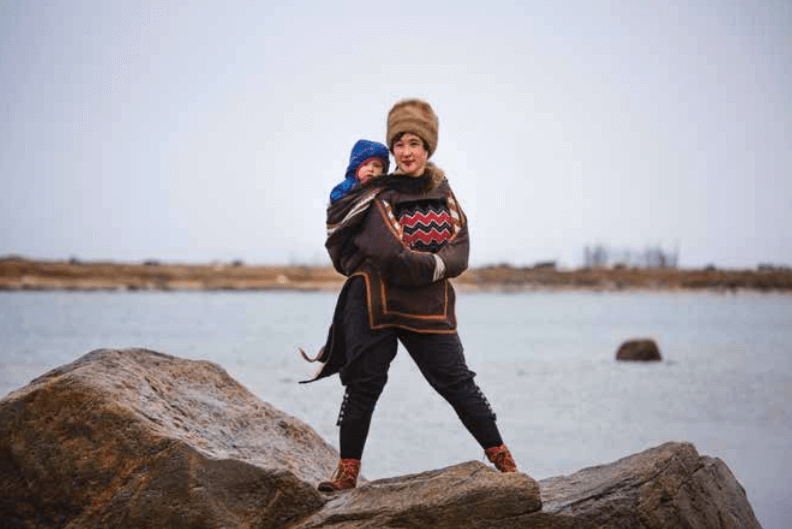 Imagine a teenager, face smeared in soot and red and white paint, summoning the crowd to its feet. This was the breathtaking scene at Laakkuluk Williamson Bathory’s pep rally in the 1990s.

Pep rallies, stirring and spirited as they are, don’t immediately evoke images of overtly political, much less radical, acts. But for Williamson Bathory, a celebrated Inuit performance artist, any space with an audience can be transformed.

With a roaring energy, she would perform uaajeerneq, a Greenlandic mask dance that invokes the power of storytelling, before a field of football players and fellow classmates. It was “in-your-face racism” meets uaajeerneq, an unnerving and moving performance, with its heavy use of sweeping movements and contorted expressions that seem to channel the unhinged— and comical—side of humanity. For Williamson Bathory, dancing became a way to “level the playing field.”

In her hands, uaajeerneq knows no boundaries: It embodies the frustrations, hopes, and ambitions that preoccupy Indigenous communities. Though her days performing at pep rallies are over, she continues to elevate all these raw emotions into national consciousness.

From appearing in “Retribution,” a music video by award-winning Inuk throat singer Tanya Tagaq, to running workshops at schools on sexual health and the environment, Williamson Bathory commands any stage with her liberating interpretation of uaajeerneq.

In “Retribution,” Tagaq and Williamson Bathory’s performance grapples with humanity’s contentious relationship with the environment, reckons with the road to reconciliation, slays stereotypes, and brings focus to the unsolved cases of missing and murdered Indigenous women.

The privilege of having a broad, increasingly visible platform to share her work has connected her to the works of other emerging artists on the cusp of “getting to know themselves,” Williamson Bathory says.

In Timiga, Nunalu Sikulu (My body, the land and the ice), a glacially paced video that both meditates on the silent beauty of the Arctic and upends stereotypes, Williamson Bathory gives a new layer of meaning to the body-positive movement by baring it all. Nudity for Inuit in Greenland—and many elders in Nunavut—wasn’t shameful, but was embraced with a healthy sense of humour and pride. In fact, when she started having children, Williamson Bathory’s mother said, “Welcome to your accordion years.” Only in recent years have the Inuit grown shy about their body.

Revealing every scar, every fold is a political act, an act of decolonization, Williamson Bathory says: “It’s an uncovering to help with the hurt so many Inuit feel about their bodies— an offering of healing.”

That’s just one of the many lessons her parents imparted. Williamson Bathory’s upbringing involved plenty of exposure to her Inuit roots. 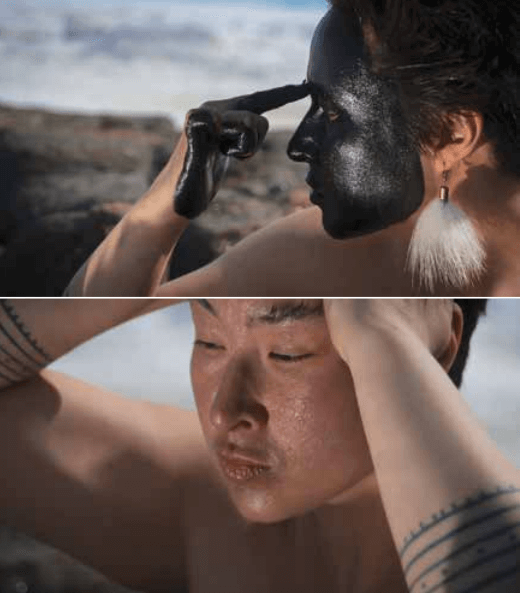 And though her ancestors hailed from Greenland, she can trace her lineage to a physical map of Canada. Random fate and artificial lines, which were drawn to carve out the country into discrete provinces and territories, played a part in bringing Williamson Bathory’s parents together.

On a whim, her mother, living in Greenland, ended up in Canada to chase the opportunity to connect with other First Nations students. “[My mother] felt that Greenland was very focused on its relationship with Denmark. She wanted to be in touch with other Indigenous people in the world,” she says. “She pointed at a map of Canada and found Saskatoon.”

With a little digging, her mother, studying to become a teacher at the time, discovered that the University of Saskatchewan had a program designed to prepare its First Nations students to tackle the challenges facing the next generation. That prompted her to transfer, where she ended up meeting Williamson Bathory’s late father.

Her father may have been English, but the entire family spoke Inuktitut at home. Still, Williamson Bathory believes that art can be a path to reclaiming tradition for those who can’t speak their mother tongue. “What we find is if you are a young person who may not speak Inuktitut fluently,” Williamson Bathory says, “it is through music, through creative ideas, that you get excited to learn more.”

For Williamson Bathory, it was through her mother, along with Maariu Olsen, an influential performance artist, that she learned uaajeerneq, when she was 13 years old.

The success Williamson Bathory enjoys now is the product of years of grit and persistence on the front lines, engaging her community through art. After years as a volunteer-run operation, Qaggiavuut Arts Society in Iqaluit, Nunavut—where Williamson Bathory is the program manager—is making strides to realize its dream of creating a hub for artists to collaborate and pass down their craft to the next generation.

Last year, Qaggiavuut secured a total of $1 million in funding through a series of grants, which enabled it to rent out space for an office and community programming. The plan is to have a dedicated building to run its mandate out of. Until then, much of the art that emerges comes from “people’s living rooms, overcrowded houses, shacks heated by oil stoves,” she says.

Still, with a jump-start in funding, Williamson Bathory can simultaneously devote more time to her art and activism to tell the stories of her community.

“To be able to tell our own stories, with our own bodies is an incredible feeling of purpose,” Williamson Bathory says. “It’s really important for young people to see that. I don’t see myself as someone who is dictating an agenda. I really feel like I’m a part of a movement.

CORRECTION: A previous version of this story incorrectly stated that Williamson Bathory attended high school in the 1980s, not the ’90s. Since publication, her title has also changed at Qaggiavut Arts Society. The story has since been updated. This regrets the errors.