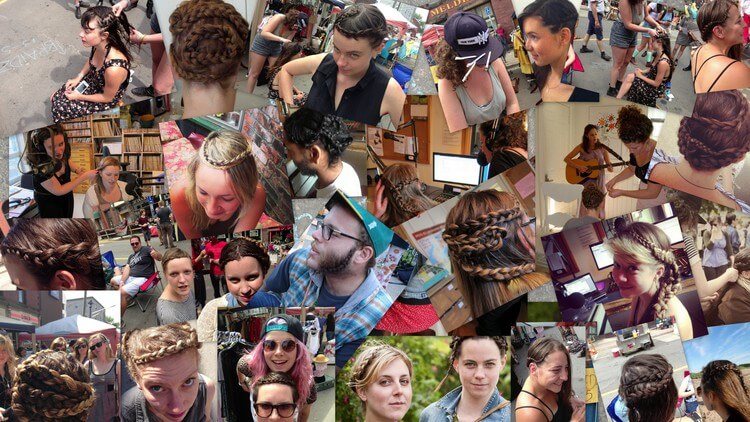 If Veronica Simmonds were writing a how-to guide for unparalleled elation, it might go a little something like this: follow your curiosities, meet all kinds of people, do the research, piece it all together and go live on-air—without knowing if anybody is listening. A sound-loving radio artist from Toronto, Simmonds has produced radio documentaries for ABC, BBC, and CBC. For her, radio is much more than call and response—it’s an open invitation, a feedback loop, a respite. “Most of my projects,” she says, “are all about encouraging people to go a little slower and listen to each other.”

As the creator and host of Braidio, Simmonds also braids hair on air. From 2012–2015 it graced the airwaves of CKDU in Halifax and can now be found as a podcast online. Braidio is more than just a good pun: Simmonds braids hair behind her subjects, allowing them to feel like they’re speaking to themselves, a sort of on-air Freudian therapy. Simmonds has braided artists, musicians, journalists, and scientists, but Braidio is open to anyone who is willing to open up about their work, their childhood memories, their feelings about hair, and everything in between.

Simmonds’ love of the sonic isn’t bound to traditional radio. She characterizes her work as hugging the line between journalism and art. Take, for example, Body of Water, a co-created ode to urban lake swimming. The “immersive parallax web experience” pairs Simmonds’ recordings of ethereal subaqueous sounds with dreamy underwater photos, short videos, and interviews about people’s swimming experiences. One desert-dwelling listener told her it felt like he was swimming. “That’s the gold star,” she says,” being able to take people to a place they haven’t been before.”

Simmonds likens herself to a sonic sorceress. There’s power, she says, in not knowing what you’re going to get on the radio. “I love to be on the other end,” she adds, “being the weird serendipitous magician that can give you something you weren’t expecting.

Michaela Cavanagh is a former This Magazine intern.