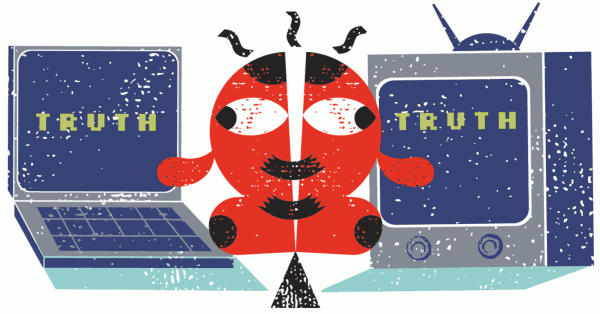 Though you might reasonably condemn the modern internet for a variety of reasons—ruining attention spans, turning all public discourse into a shouting match, or insulting your sexual prowess with badly punctuated mass emails—one thing the medium could always reasonably claim was its potential for spreading truth. Decentralized and egalitarian, the web seemed to herald the end of the coverup: with no authority to stop the spread of information, facts would inevitably slip the bonds of corrupt politicians, crooked industrialists, and tyrannical generals. Sooner or later, we believed, the real facts would always come to light. The Truth Is Out There.

It turns out that’s not, uh, true.

That’s if the results of a recent study from the University of Michigan are anything to go by. The researchers found that people are remarkably resistant to facts that deviate from beliefs they already hold; the phenomenon is particularly acute in those with strong political leanings. This is the “truthiness” that satirical news anchor Stephen Colbert famously named—a trust in gut instincts instead of documented facts. That intuitive concept has now, somewhat ironically, been scientifically proven. In other words, The Truth Is Out There, But Nobody Can Be Bothered To Go Looking For It.

We already know that falsehood, distortion, and bullshit flourish online just as much as fact. The internet is home to climate-change deniers, 9-11 conspiracy nuts, and fringe politics of all sorts—in part because it is so easy to find “facts” that support whatever you believe. The sheer glut and variety of information online has made it difficult to distinguish fact from invention and truthfulness from truthiness. The result, for many people, has been to retreat into the comfort of the mainstream media.

Canada experienced this during the G20 summit in Toronto in July. After some protestors caused property damage early in the weekend, many journalists found themselves at the centre of what they believed to be an excessive police reaction. Twitter, Facebook, and YouTube were central to this real-time reporting, and people who were following the demonstrations and police actions online had a very different experience than live-TV viewers—who mostly saw sensational footage of a burning police car on a continuous loop for two days.

TVOntario’s Steve Paikin—a man who has built a career on measured neutrality—told of what seemed like an illegitimate round up of legal protestors and the beating of a reporter from the U.K.’s Guardian. The Globe and Mail’s Lisan Jutras wrote of her experience being detained in the rain for hours and taken into police custody.

New media seemed to finally be fulfilling its promise: coverage that was richer, more immediate, more diverse, and faster.

Yet a few days after the summit, an Angus Reid poll revealed that a full two-thirds of Canadians not only supported the police action, but were also “disgusted” with the protestors, despite the fact that the majority of them did nothing more than walk down streets holding placards. Images of anarchists breaking windows dominated big media, and the fact that there was plenty of information online offering a different interpretation mattered little, if at all.

The problem is that, unlike TV, you have to choose what you view online. That means that unless you’re already looking for an alternative take, it’s unlikely to find you. But more than that, the web is full of so many different versions of the truth, from the legitimate to the lunatic, that their very existence undercuts the medium’s validity for many people. When it is as easy to stumble upon a cogent, well-researched critique of global capitalism as it is a raving theory about “the moon-landing hoax,” the tendency is to discount the medium altogether.

By allowing anyone to publish and disseminate information, the web broke the historical link between power and publishing. Many people cheered that change, and for understandable reasons. The web embodies the contemporary collapse of all the things that once seemed beyond question: truth, fact, authority. But when nothing is objectively true, it also means nothing is objectively false. Presented with an almost infinite mass of options, most people, rather than diving in, simply retreat into what they already know—and for the majority, that’s still television.

Despite the video’s incendiary content, and the clip’s seven million YouTube views, almost nothing changed. In the face of the official story and people’s faith in the authority that stood behind it, the clip was nothing more than a grain of sand, like those blown about by that helicopter’s blades—one more “fact” among millions, lost in the roar of a rushing, directionless storm.