If you believe in equality for all genders you’re a feminist, “Simple,” says sociologist and author (Angry White Men, Guyland) Dr. Michael Kimmel. So what is the big deal with people adamantly denying that title, especially since, as Kimmel points out, most people do want this kind of equality? “The conversation we’re having here,” says Jeff Perera, community engagement manager at White Ribbon (the world’s largest movement of men and boys working to end violence against women and girls), “Is why in general is the F word such a scary one?”

It isn’t only men who shy away from the term; some women do too. And some men, like Kimmel, do say they are feminists. Yet Perera can’t help but notice the sour faces he sees some other men make when feminism comes up. Language is intricate enough that words can serve as bridges, but if a word serves as a type of barrier, Perera asks why, “If the word feminism is a barrier for a guy, meet them where they’re at. Talk about sports, talk about being a dad, talk about dating.” Which is what he does with his writing in Higher Unlearning. He doesn’t do this to be sneaky or water feminism down, but to be approachable and start that dialogue, “I’m serving lasagna stuffed with feminism,” he says. “People are saying it’s delicious, and I say, “You like it? It’s actually stuffed with feminism.”

Kimmel shares a similar sentiment, “When people say ‘I’m not a feminist but,’ we tend to focus on ‘I’m not a feminist’ when we should be listening to the ‘but.’” If someone embraces that women are human and deserve human rights, Kimmel suggests self-identifying as feminist isn’t important. Even Perera doesn’t identify as a feminist based on his own principles regarding respect. He identifies as a person striving to be an ally toward woman identified people. 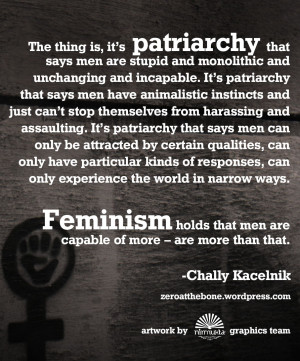 Though society is shifting and more people are “getting it” Perera understands feminist is a loaded term.  With such a spectrum of types of feminism, and the way mainstream media portrays the politic, he says, “Some guys see all the chaos and avoid it.” And in the end, “Feminism isn’t a sexy sell.”

“You don’t want to be the party pooper,” says Perera. “To be the guy to call out the cool guy [who is making sexist remarks]” With this social scenario, however, he says a male doesn’t have to go into a big feminist lecture, instead he can roll his eyes and walk away commenting, “That’s not cool man.” He says it is all about getting comfortable with the discomfort, to realize that feminism is not about who has it worse or shaming men, but is very much about men.

“The beauty of patriarchy is it divides us so much,” he says. Men are supposed to have expensive cars and acquire women, they aren’t supposed to go home alone ever, they are supposed to be strong and tough—never vulnerable.  And when guys are trying to figure all of this out, it is at the expense of women and girls, he says, like they’re dolls. “The world we live in codes [men and boys] that way,” says Perera. “But we have the responsibility to reject it.” With his work Perera talks to men and boys about this binary idea of the roles of men and women, “Let’s talk about us.” He doesn’t make it aggressive and he isn’t trying to convert men’s rights activists, or preach to the choir: He is talking to the guys in the middle.

“It sucks, men won’t listen to women,” he says. “So it’s my responsibility to direct the right conversation.” Taking a cue from the business world, Perera is trying to find innovative ways to explain how feminism is about all people: it isn’t about men losing any of their privilege, but for humans to grow. It is about creating a dynamic environment where everyone can be who they are. “It’s not easy being a guy,” Perera says. So when being a guy means being having it all together without any emotion, “Stop trying to be a guy.” Feminism means freedom, he says. “A respect for women and girls means guys can be themselves.”

When we all talk about feminism more and more, more people will have our back. And if a guy does call out those sexist jokes, people will respect them—even if it isn’t said aloud.

Another part of Perera’s work is about getting men to understand. I met Perera at SlutWalk Toronto 2014.  The event created a safe place for women. But, as he points out, when the event was over, he and other male allies simply went home. Whereas women returned to a world where they continue to be slut-shamed and harassed.

An activity Perera does with White Ribbon is having guys tape $100 to their chest and go through their day. These men and boys reported feeling anxiety wherever they went. People were staring and it was hard to focus at work and/or school. Solace could not be found in being with friends because they didn’t know if their friends would take the money from them. He knows this doesn’t give the full experience of what a woman goes through in her day to day, but it does help when everyday sexism is invisible to so many men as they do not experience it.

Some are uncomfortable with the word feminist—with the female part of the word it sounds like a female only movement. “What, like mankind?” laughs Kimmel. “The word humanist isn’t identifying anything,” says Perera. “It’s the ideal, but we aren’t there yet.” The term feminist exists because “We can’t simply erase people’s experiences and pretend we live in a world where everything is resolved.”