On September 20, United Nations Women Goodwill Ambassador and actress Emma Watson, addressed the UN (transcript here) at its New York headquarters about gender equality in association with HeForShe movement. The video went viral, some people got mad, others lauded the message, and then there were the ones who missed the point entirely, focusing on her she-means-business outfit.

Two days later, Joseph Gordon-Levitt sent a video request through the internet to collect viewer’s thoughts on the word feminism and what it means to them: “To me it just means that your gender doesn’t have to define who you are; that you can be whatever you want to be, whoever you want to be, regardless of your gender,” says the actor. Responses will be used to make an episode for Gordon-Levitt’s company Hit Record for an episode called “RE: Your Mom.” It’s perfect for Gordon-Levitt, whose mom taught him about feminism and was active in feminism’s second wave.

“I decided that I was a feminist. This seemed uncomplicated to me,” says Watson. “Apparently, [women’s expression is] seen as too strong, too aggressive, isolating, and anti-men, unattractive even.”

Whether we’re into pop culture or not, it is important that these celebs are speaking out about the importance of feminism. Because of their position of cultural power and a voice that people will listen to, their messages will be heard, and then shared, re-blogged, and talked about. “Cultural domination has real effects,” writes Stuart Hall in his essay Notes on Deconstructing ‘The ‘Popular.’ “If we were to argue that these imposed forms have no influence, it would be tantamount to arguing that the culture of people can exist as a separate enclave, outside the distribution of cultural power and the relations of cultural force.” 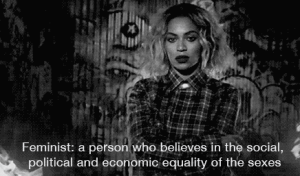 A friend of mine compares it to a person who has a megaphone at a demonstration and how they appear to have authority over the chants at a demonstration. Yet, if people are listening to celebrities no matter what, why can’t it be for the good of feminism?

“Feminism and pop culture will always be uneasy bedfellows in a larger culture that remains conflicted,” writes Andi Zeisler in her essay Pop and Circumstance, as part of Feminsim and Pop Culture. “About how much power, agency, and autonomy women should have.”