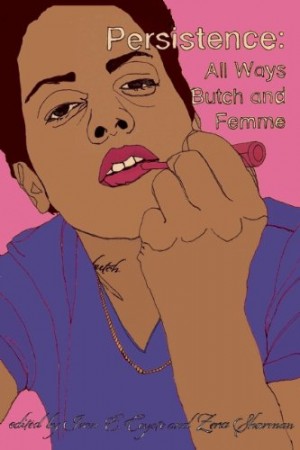 Equal parts manifesto, thesis, coming-of-age tale, and love letter, Persistence: All Ways Butch and Femme, edited by Ivan E. Coyote and Zena Sharman, breaks the reductive, sanitized gender stereotypes of what it is to be a lesbian—especially ones who don’t look like Ellen DeGeneres, Rachel Maddow, or a cast member of The L Word.

The bright spots are many, but the most affecting essays are the ones that veer into the personal: a sexworker femme’s memories of her butch lover; gay club culture in the post-Stonewall riots era; attending a relative’s stag rather than the doe; wondering if breast reductions or testosterone injections make you less butch than trans and butches with babies.

Other entries are little more than Livejournalling, diary declarations about the Self, or laced with academic speak. Swinging from one end of the narrative spectrum to the other can feel confusing, but the message as a whole is that butch and femme are not two identities, but the work of many individuals who have created themselves in their own images.

Persistence isn’t just about gender performance. It weaves thoughtful threads about class, race, disability, pop culture, and media into an oft-parodied and stereotyped modern queer culture. It’s a worthy collection that brings nuance back to notions of dykes, femmes, butches, and lesbians all.