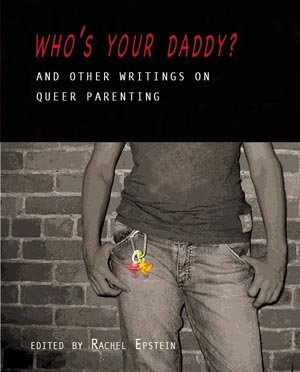 Who's Your Daddy? And other writings on queer parenting, edited by Rachel Epstein

The legalization of gay marriage in Canada has coincided with an era that might be dubbed the first “queer baby boom.” As such, this generation of queer parents and their children have been forced to adopt the ambivalent role of pioneers in a social space in which the model of the “traditional” nuclear family does not apply.

Who’s Your Daddy: And Other Writings on Queer Parenting, a diverse collection of essays and perspectives, examines questions of queer family and identity. In it, queer parents write about the joys of parenthood as well as the nagging ideological concerns (novelist Emma Donoghue, for instance, cites a fear of becoming a “stereotypical nuclear family” or a “Stepford zombie”); while “queer spawn” discuss their experiences growing up outside the norm and express a shared desire to give voice to their fast-growing community.

The politicization of queer identity, in combination with deeply ingrained heteronormative views of what it means to be a parent, complicate the issues surrounding LGBTQ family-forging in ways that require thoughtful discussion, and a forthright treatment of the diversity within queer families themselves. To this end, editor Rachel Epstein succeeds in including perspectives from throughout the broad spectrum of queer families: polyamory, butch childrearing, gay dads, single parenting, familial class issues and trans-racial children are each given their due attention in this important and timely collection.