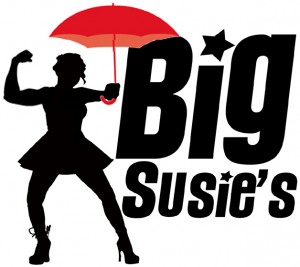 I moved to downtown Hamilton, Ontario, in 2005. We bought our three-storey Victorian home near Copps Coliseum at a price that would have been unheard of in Toronto. The corner we lived on had been labelled “the most dangerous corner in Hamilton.” But my shaved head and tattoos stood out less here than in the fashionable, gentrified neighborhoods of downtown Toronto.

I noticed that a) there were lots of sex-trade operations near our house— for instance, massage parlours and the Hamilton Strip strip club—and b) there were also two anti-abortion establishments nearby. Our neighbourhood was like many other Canadian neighbourhoods: some people believe sex is for fun and pleasure, whereas others believe sex is specifically for making babies.

That’s why I’m so proud of Big Susie’s. Big Susie’s is (to quote their website) “a working group by and for sex workers in Hamilton and the surrounding area.” Their purpose is to “fight back against the stigma and silence that degrades, devalues and dehumanizes sex workers and their work.”

The organization was born because of an odd and somewhat unfortunate intersection between politics and art. In 2009, a small local art gallery featured a series of photographs the artist had taken from the window of his studio, which was near a notorious alley used by hookers. The photographs were explicit and voyeuristic and—most importantly—were taken without the consent of the subjects. Trendy artists and people from the suburbs who visited the little gallery seemed entertained by a scandalous glimpse of Hamilton’s sexual working-class underbelly. But local sex-trade workers were angry. Weren’t they people too? Did someone have a right to photograph them and make an “artistic statement” about their bodies and their lives, without their permission? The protest against this exhibit led to the birth of Big Susie’s. Is all art political? Definitely, yes. Should artists be challenged when they consistently make work they characterize as apolitical, when in fact it is not? I (not to mention Bertolt Brecht!) would say yes.

As an out gay man and a drag queen, I have always been proud to be promiscuous. It makes me feel safe to have an organization in my town that is sex-positive and defends the rights of women to use their bodies in any way they wish in consenting sexual situations. Some feminists assume all prostitutes are victims, and proceed to speak for them, as if they didn’t have a voice of their own. But, lo and behold, they do.