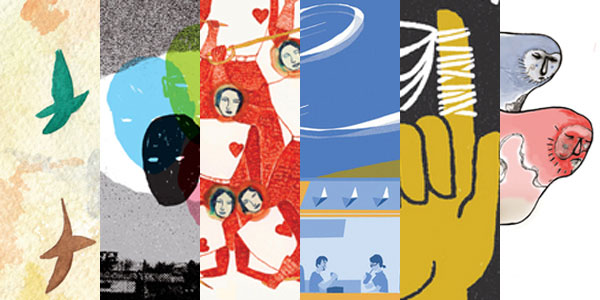 Even when it’s not faced with an uncertain digital future, the publishing industry occupies a very uncomfortable place at the intersection of art and commerce. “Intersection” may not be the right word; it’s more like art is one end of a teeter totter and money is the other, with publishing in the middle, trying to make sure neither side bounces too hard or falls off or knocks the whole thing over. It’s a tough act.

Enter Invisible Publishing. Started in 2007 in Halifax by pals Robbie MacGregor, Nic Boshart, and Megan Fildes, Invisible chucked out the teeter-totter in favour of one giant sandbox. It’s a collective, in that beautiful old lefty way; they’ve just officially incorporated as a non-profit, though that term seems a little dry for a group that has so much fun together. The three chiefs have titles, sort of: Robbie is publisher, Megan is art director, and Nic, who has decamped to Toronto, is president, a title he can’t quite say with a straight face. They all have other jobs; Nic works at the Association of Canadian Publishers, Megan as production designer at Halifax’s The Coast, and Robbie spends his days at the Halifax Public Library—which means they don’t depend on Invisible to pay their rent. In fact, Invisible doesn’t pay them at all.

That’s right: they spend their evenings making books because they want to. And that sets the tone for the whole enterprise. They don’t publish books for authors, they publish with authors; writers can participate as much as they like, as can just about anyone else who’s keen to be a part of Invisible. So people offer to help. Jenner Brooke-Berger, for example, volunteered to read the slush pile and ended up doing promo and editing. Sacha Jackson, an editor, tackled marketing. And Sarah Labrie made an e-reader case for one of Invisible’s book covers. They even have a manifesto (not a mandate, a manifesto), which includes these lines: “We are collectively organized, our production processes are transparent. At Invisible, publishers and authors recognize a commitment to one another, and to the development of communities which can sustain and encourage storytellers.” Publishing as communal act: what a brilliant idea.

Speaking of brilliant, perhaps the most important part is the work they do. The folks at Invisible publish smartly: award-winning design; a forward-thinking and successful focus on e-books, complete with a super-smart blog; distribution and marketing savvy; and, most important, a discerning eye for talent. Commercial viability isn’t Invisible’s primary concern; good writing is. They’ve published 14 books, including Devon Code’s In a Mist, Stacey May Fowles and Marlena Zuber’s Fear of Fighting, and Ian Orti’s L (and things come apart), which recently won CBC’s audience-choice Bookie award. Invisible’s most recent release is about Montreal band the Dears.

Make no mistake: publishing is no picnic these days. Books are having a tough go of it in an age where people expect to get information for free. No one is in publishing for the money, but Robbie, Nic, and Megan take their labour of love one step further and make publishing a vehicle for creating community. With that, Invisible proves that publishing is not down for the count—not in the least.