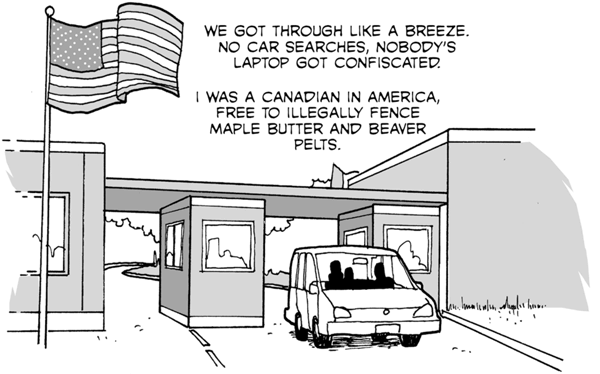 When Mike Holmes passed through Toronto on his reading tour last fall, he warned the audience, “I’m a cartoonist, not an author.”

Holmes is, in fact, both. His latest work, This American Drive, is not just a novel with pretty pictures. Weaving traditional storytelling and elements of the graphic novel with unexpected ease, the book is Holmes’s memoir of his road trip from Halifax to his then-girlfriend’s parents’ home in Texas. Along the way he passes through the America of our imagination—full of fast food joints and rock ‘n’ roll icons.

Aside from Holmes’s dry wit and and hilarious drawings, the book is also pleasant to the touch. Its thick, textured cover and smooth cream pages alert the reader that Invisible Publishing’s books aren’t your average corner-store-comics fare. Publisher Robbie MacGregor stresses the importance of making books that are as appealing to the eye as to the brain. This small Nova Scotia publishing house makes a point of finding new authors who might otherwise slip under the radar.

Holmes says he’s never really noticed a difference between Canadians and the world south of the border—a fact he drives home in his book with a humourous illustration of the first few miles beyond the Maine border: a Tim Hortons, a Walmart, and an Irving station.

“Oh Maine. Come join us,” he coaxes from the page. “We’ll treat you right.”