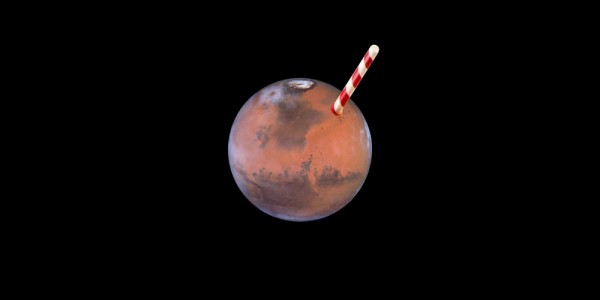 The billions of dollars and years of research that NASA has spent studying Mars may have finally yielded some results here on Earth.

Earlier this year, NASA scientists told the UN water conference in Egypt that they could use radar technology originally developed to search for water beneath Mars’ surface to find H2O buried up to a kilometre beneath the deserts of North Africa and the Middle East. Such equipment could help ease global water shortages and avoid future conflicts over water supply, Dr. Essam Heggy, a planetary scientist and a member of NASA’s Jet Propulsion Laboratory, told gathered delegates. Scans of Darfur, he added, show that the entire region sits atop a series of dried lakes and valleys that are 6,000 years old, suggesting there may be underground aquifers that could be tapped for water.

Don’t grab the straws yet, though.

“Certainly having a larger water supply could—if used wisely—reduce the level of conflict,” says Professor Dan Shrubsole, chair of the geography department at the University of Western Ontario and a specialist in water management. “But in terms of ensuring that the water is wisely and efficiently used? That’s another question.”

And it’s an important one to ask. Just digging up more water—instead of tackling the root cause of our global water shortages—is hardly the most responsible route. And as a concept, drilling miles into the earth to extract its valuable fluids—ahem, see the BP Gulf oil disaster—seems less credible by the day.

Fact is, we waste a lot of water. UNESCO estimates that up to 90 percent of water used globally is consumed by agriculture and industry, and much of it is wasted. According to the Stockholm International Water Institute, up to half of all water used to produce food worldwide is wasted through inefficient irrigation techniques, or leaking pipes and crumbling infrastructure. We’re literally pouring billions of litres of water down the drain.

Shrubsole also warns that NASA’s plan to connect surface water systems over national borders could elevate tensions between water-starved nations, leading to conflicts over who owns the rights to the water, and where. Governments need to take the initiative to establish ground water management regimes that are transprovincial, trans-state, and transnational, he stresses. Unless that happens, Shrubsole is doubtful that just drilling for more water could avert resource conflicts. “There are lots of conflicts over water now,” he says, “And there will be lots of conflict over water in the future.”