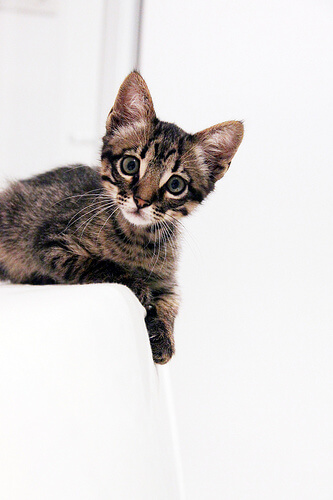 All-natural wood- and corn-based cat litter is a better, greener alternative to traditional clay cat litter. Not only is it biodegradable, but pet owners can flush kitty’s mess down the toilet without getting the guilty conscience that comes with adding a plastic bag per day to already overflowing landfills. But could cat poop pose an even bigger environmental problem when flushed?

Each year, cat owners in the United States alone trash over two million tonnes of clay cat litter, almost all of which is dumped into plastic bags and shipped to landfills. Even worse, clay litter is largely derived from strip mining, a disruptive industrial process that literally strips the earth’s top layer to reach underlying seams of clay. No wonder eco-minded pet owners prefer litter made out of scrap pine or newspaper pellets.

Unfortunately, they may be clearing their conscience prematurely. Sure, flushable litter won’t gunk up your pipes like clay litter might, but the cat feces we flush is contributing to the infection and death of all kinds of sea life.

Cat poop can contain a dangerous parasite called Toxoplasma gondii that causes a disease called toxoplasmosis. Only cats that have come in contact with infected birds and mice will carry the disease, but infection rates for outdoor cats are high. And when we flush infected waste, the parasite threatens ocean and sea life—the parasites are resilient, and typical water purification plants won’t destroy them.

Though researchers are still determining the extent of toxoplasma’s deadly nature, sea otters appear to be vulnerable. Studies in Morro Bay, California, showed that 16 percent of infected otters died of the disease. Dr. Melissa Miller, a senior wildlife veterinarian with the California Department of Fish and Game, says the bulk of the concern, however, isn’t coming from flushable litter. When cats defecate outside, rain can wash the parasite downstream and affect all kinds of aquatic wildlife.

If kitty doesn’t go outside, and eats commercial cooked cat food—and not an infected bird or mouse—her poop should be safe to flush. Even so, says Miller, (who owns three cats herself), the best place to toss cat poop is with your weekly garbage. Compostable litter is the best choice in that case—and try compostable garbage bags for good measure.