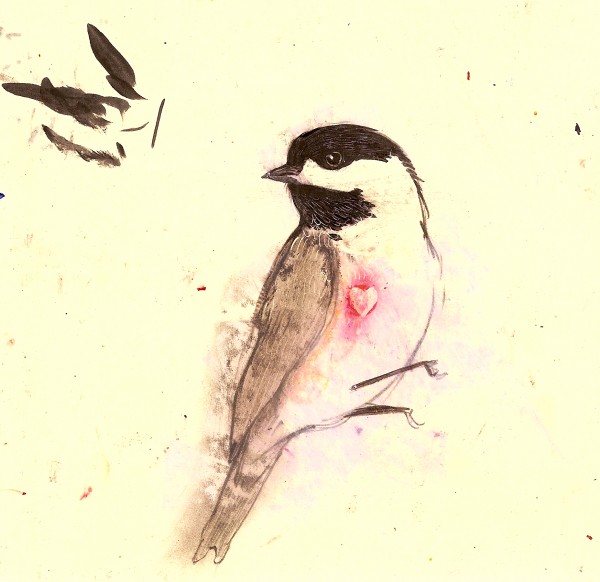 Thompson first made a name for himself on the streets of the capital as a graffiti artist. Working under the pseudonym Maki, Thompson populated nooks and alleys throughout the city’s downtown with a menagerie of dazzlingly rendered and brilliantly coloured animal forms. It was as though the techno-coloured spirit-creatures painted by Norval Morrisseau had burst forth from their canvases and stormed the walls of the nation’s capital. 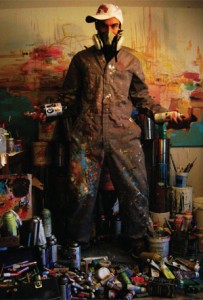 Stefan Thompson in his Ottawa studio. Image courtesy the artist.

But three years ago, as Thompson was emerging as an artist under his own name, this time working on canvas, his work took a radical shift. He tossed all of his solvent-laden spray cans and abandoned many of the brilliant pigments that had been central to his palette. The one-time environmental sciences student decided he couldn’t work in a poisonous medium any longer.

“It was guilt, and a certain degree of knowledge about the environment that I picked up in university,” Thompson says of his motivation. “I was reading the back of art supplies and realizing that I was washing carcinogens off my brushes and down the sink.”

Curbing that chemical dependency has had serious consequences for his art. Cadmium red was the first colour Thompson trashed, but he quickly recognized that most brightly coloured paints are a toxic soup tinted with dangerous metals. Giving up toxins literally drained the colour from his artistic world.

“I was really big into colour, so it was a huge shift,” Thompson says. “It was scary. At first I had no idea what to use with the materials. I was making my own paint[s] and they were really crappy. At first I thought that was it for art. I did my last couple of shows, paid off my debts and said, ‘I can’t make money anymore.’” But he didn’t throw in the painter’s smock. He persevered, experimented, adapted his style, and eventually developed a non-toxic palette. 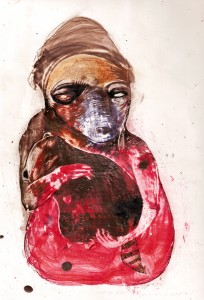 "Hold You" (2010) by Stefan Thompson. Image courtesy the artist. Click to enlarge.

“The paints worked okay but they didn’t perform quite the same way, so I had to relearn everything,” Thompson says. The home-brew paint has limited the marketability of his work. Major galleries and serious collectors, who view art as an investment, tend to prefer proven painting methods. Thompson says his work also lacks the visual punch of conventional painting.

“It’s not oil paints on big canvases and it’s just not as lucrative,” he says. “There’s certainly a small group of people who appreciate what I am doing and for me it’s been good in that I’m still making art and scraping a living out of it.”

At the moment, Thompson uses beeswax crayon on recycled papers and reclaimed lumber to produce small relief illustrations that can be transported easily in a bicycle trailer. It’s part of ongoing experimentation that has led him to incorporate carbon, fabric, sewing, and even some doll sculpture into his artistic work. It’s also part of an ethic that has consumed Thompson’s day-to-day life. He’s in the process of building an all-natural home for himself in the hills north of Ottawa.

Thompson says everyone should be doing what they can to reduce their environmental impact, though he knows his choices may not be for everyone and certainly wouldn’t suit all artists. 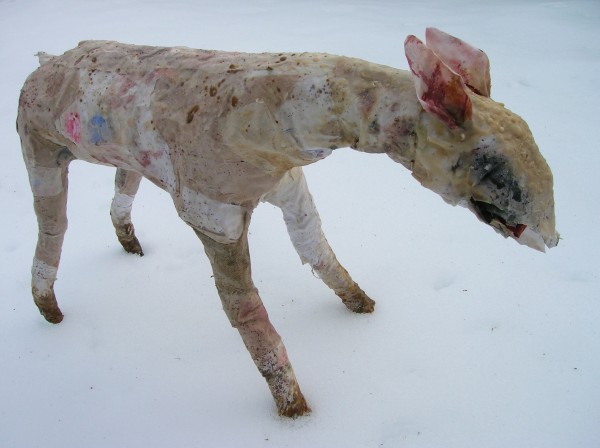 “If a beautiful painting inspires someone to go out into the world and create things, that’s not a bad thing,” Thompson explains. “Art is just one little piece of the giant puzzle. Point zero one percent of the paint in the world is used for art and the rest of it is used for cars and houses. Every piece of equipment we have is covered by paint. It’s really just a little point in a big picture but I think it’s good as an artist to make a point of it. Because that is what art is about. To say things.”