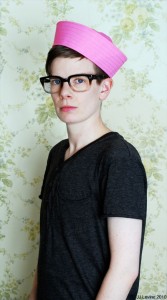 This week’s installment of Tuesday Tracks comes care of a little bit of serendipity. Tuesdays tend to sneak up pretty quick sometimes and it can be quite distressing and a little embarrassing when Monday night rolls around there are no new tracks to be found.

Most weeks it’s pretty easy—there’s so much to listen to, and doing a regular feature like Tuesday Tracks is the perfect excuse to inhale it all. It gives the listening process some purpose and makes it feel a little less self indulgent; I’m working man, after all! But sometimes Tuesday creeps up and it just so happens the stuff streaming through the iPod isn’t particularly new or, more importantly, isn’t particularly Canadian. This leaves me cursing myself over leaving things to the last minute and making promises to myself to never let it happen again. But the truth is, often these turn into the best nights, a Monday night locked inside, clicking around the web in search of inspiration. It’s surprising how easily it can come sometimes. Sometimes it feels a little like the songs find you. So this week I present a collection of songs that have nothing in common beyond the long shot chance that I stumbled on them and really, really liked them.

This weeks first track comes from Rae Spoon, a singer songwriter from Calgary. Spoon’s output up to this point is on the country/folk side of things, but with “Love is a Hunter”, the title track from Spoon’s upcoming album, things get a little more dramatic. The video is a herky-jerky stop motion hallucination speckled with body parts, cat heads and angelfish. The song sets itself up with a restrained build that feels like you’re listening in slow motion while the arrangement layers itself, getting bigger and bigger before it breaks for quiet again. I’ve listened to this song probably 12 times already and I think I still want to give it another few goes before I move on.

Next up is one of two Québécois shortlisters for the Polaris Prize: Karkwa (the other is Radio Radio). The song, “Oublie Pas”, has a slow, dreamy feeling to it; not being a fluent French speaker, I can’t comment on themes here, except that the title means “Don’t Forget.” I kind of like it that way sometimes; it’s lovely to be able to listen to music written in a language you don’t speak, since it focuses you on the sounds—the musicality—of the language, instead of getting distracted by the lyrics’ meaning.

Finally, the last selection in this weeks edition is The Beauties. Somewhat of a live institution, the Beauties has garnered quite a following with their impossibly popular Sunday night residency at the Dakota Tavern in Toronto. Finally, they’ve put some of that charisma down on tape with their debut album. Check out “Fashion Blues” to find out what all the fuss is about: