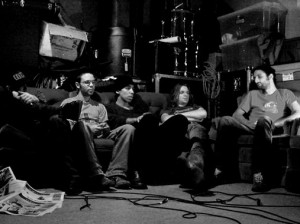 This year’s winner is — surprise! — Karkwa, a band that few predicted in advance. But really, no one should be surprised. The Polaris Grand Jury likes to pull their choices out of left field and of the four previous awards given, three were handed to Ontarians, so someone else was due. Of course, none of this is an attempt to explain away the merit of Karkwa or Les Chemin de Verre, the album that won them the prize.

In this edition of Tuesday Tracks we’re going to take another look at Karkwa and see why they’re so deserving of the prize. Then we’re going to look at two other short listers that missed the Tuesday Tracks spotlight over the course of the past few months, (although they both certainly had the attention of the rest of the music press).

First! your 2010 Polaris Prize winners, the underdogs—Karkwa. Formed in 1998, Karkwa are fairly well known in Quebec, but less so in Anglo Canada. Their music is dense and dramatic, I’d like to speak on themes, but frankly I’m one of those unilingual heathens. It’s beautiful, but don’t take my word for it. Here’s “Marie Tu Pleures” off their Polaris winning album.

Next up is Tegan and Sara, the identical twin duo who have released several award worthy albums over the course of the past ten years. Their latest – Sainthood – might not have won the big prize last night, but they did take everyone by surprise by being perhaps the funniest nominees, joking about the potential length of their acceptance speech. They performed “Alligator” (sorry, it can’t be embedded, but you can watch it on YouTube) with the help of Owen Pallett.

Speaking of Owen Pallett — previous winner of the award under the moniker Final Fantasy, and again a nominee in his own right — somehow he too was overlooked by Tuesday Tracks leading up to the big night. In reality, already having a Polaris Prize, his chances of winning were pretty much zilch, but his new album, Heartland, his first under his own name, is a lush, delicate piece of music, complicated yet accessibly and rewarding. Possibly his finest, here’s “Lewis Takes Off His Shirt.”