Young Québécois filmmakers are rejecting the commercially successful nostalgia movies of recent years in favour of suburban ennui, substance abuse, and suicide. Get ready to get gloomy! 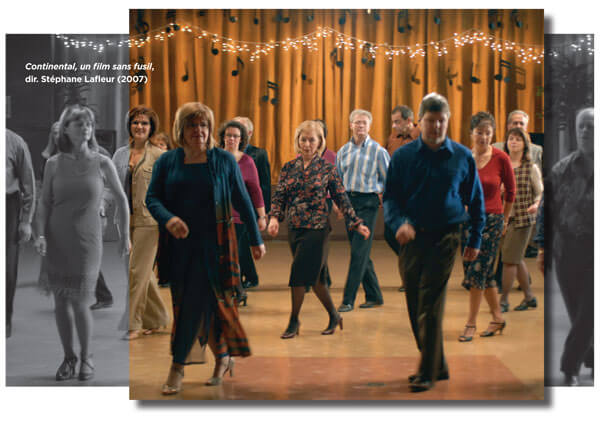 The title of Quebec director Stéphane Lafleur’s Continental, un film sans fusil (Continental, A Film Without Guns) is not only a playful warning to viewers seeking the adrenaline hit of an American action movie. A classic on the Quebec line-dance circuit, The Continental Walk is an American dance tune written by Hank Ballard—the man behind The Twist and The Hoochie Coochie Coo (line dancing is very popular with Quebec singles’ clubs). Their backs rigid, dancers of the Continental glide across the floor in sync, moving backward, then forward and to the left and right, occasionally jumping up and clicking their heels together. Like the characters in Lafleur’s feature, the lone dancers cross paths without touching each other. Lafleur pointedly drew from American popular culture for the title of his film, which follows the lives of four quintessentially North American characters lost in the circumstance of their suburban lives.

Lafleur is one of a generation of thirtysomething Québécois filmmakers, coming to be referred to as the “Quebec New Wave,” who explore the disquiet and confusion of life on this continent. Although these young filmmakers justifiably reject being labelled as a collective, taken together, their work reflects a new sensibility in Quebec cinema. While the characters speak French, their experience as members of North America’s largest francophone minority barely registers. Their cultural reference points are universally North American, not specific to Quebec. Questions of language and nation are conspicuously absent. 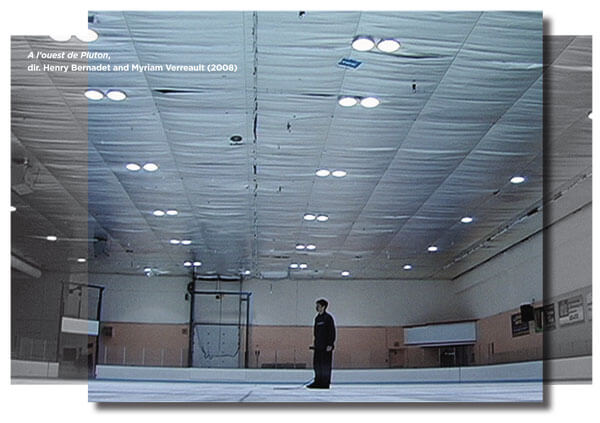 Still from 'A l'ouest de Pluton' (2008), directed by Henry Bernadet and Myriam Verreault.

New Wave films are minimalist, reflective, and marked by the austere influence of distinctive, deliberate filmmakers like Roy Andersson, Pedro Costa, Ulrich Seidl, Darren Aronofsky, Gus Van Sant, and Bruno Dumont. They focus on the seemingly mundane, morose aspects of daily life, often with painstaking slowness. The dialogue is sparse and the takes are long. The themes they explore are dark: social isolation, the breakdown of the family, teenage suicide, and prostitution. And while they draw heavily on the work of Northern and Eastern European auteur filmmakers for their harsh, in-your-face realism, the Quebec New Wave is firmly rooted in the landscape and culture of North America. Many of their characters seem trapped in uninspired suburbs where they are cut off from nature and other people—except for their dysfunctional families.

Most of these New Wave directors came of age in the politically uncertain period after the 1995 separatist referendum defeat, when the Quebec nationalist movement was deflated and rudderless. They later practised their art with the thriving Kino experimental short film movement.

Their films respond to the blistering speed of contemporary media and to the wave of crowd-pleasing, nostalgic Quebec films released to considerable commercial success in the past decade, such as La Grande Séduction, Les Boys 4, and C.R.A.Z.Y., which portray modern Quebec culture as homogenous, insular, and cheerfully Norman Rockwellian in its ability to resolve conflict. Three of the filmmakers—Fournier, Ouellet, and Giroux—spent the early part of their careers immersed in consumer culture making video clips and advertising. Côté was a well-known film critic notoriously contemptuous of mainstream box-office hits. 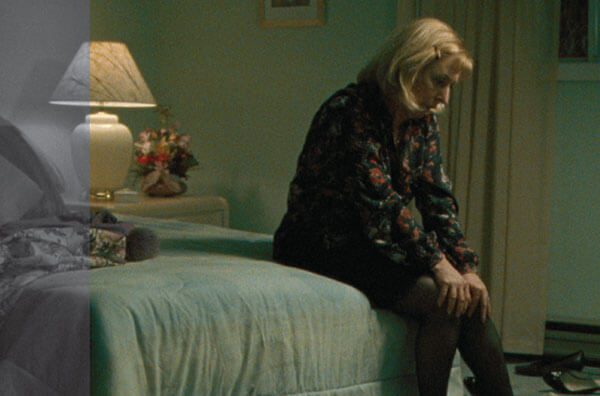 It’s as if these young filmmakers are collectively saying “let’s slow down a minute and really take a look at what’s going on in this culture.” In Continental, which was awarded the prize for best first feature at the Toronto International Film Festival in 2007, lonely people try to connect, but can’t. Chantal, a single woman invited to a party on a blind date, is so ill-at-ease she drops a squirming baby to the floor with a thud. Is it a comment on Quebec’s declining birthrate that a woman in her early 30s panics when she touches a baby? In an equally uncomfortable moment, Louis, the travelling salesman, is invited by the couple next door to him at the hotel to watch them have sex. Lonely, he agrees. In what feels like an interminable shot he sits observing them, with a Styrofoam cup of wine in his hand, completely unaroused. Embarrassed, he abruptly leaves, mumbling his thanks. 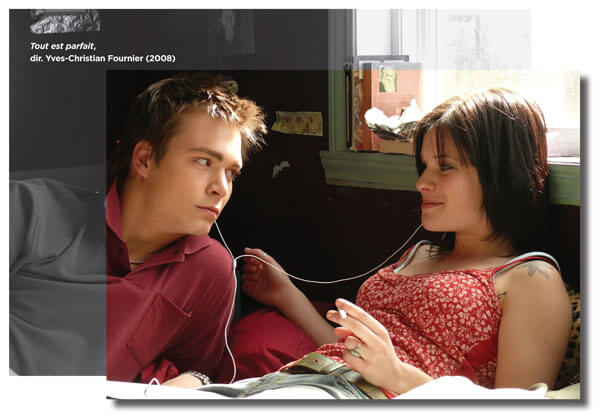 Yves-Christian Fournier’s Tout est parfait probes the taciturn world of five adolescents who feel so alienated they make a collective suicide pact (suicide is the number one cause of death among men aged 20 to 40 in Quebec). Written by Guillaume Vigneault—son of Quebec’s unofficial national poet Gilles Vigneault—and nominated for seven Genies, Tout est parfait screened at festivals in Seattle, Namur, and Belgium and was awarded the Claude Jutra Prize for best first feature from the Canadian Academy of Film and Television.

Using footage he shot in rural, urban, and suburban Quebec, Fournier created a generic North American post-industrial city. The five friends attend a massive high school and pass their time smoking dope and aimlessly driving around. Lower middle-class, they are bright but poorly educated. And while all five speak Québécois French, two of the boys are of ambiguous ethnicity: one appears to be Central American, another Scandinavian, though we never learn their origins.

Fournier and cinematographer Sara Mishara—an exceptionally talented artist who also shot Continental and Demain—jolt the audience with visuals juxtaposing both the possibility and despair of youth. In the slow-moving opening scene, a smooth-faced adolescent boy sits on a bus filled with sunlight and blue sky. Before he gets off at his stop, he hands his iPod to a radiant young woman who smiles at him. A few moments later, he shoots himself in a graveyard. In the following scenes, Josh, the central character, discovers one of his friends hanging from his bedroom ceiling in a sequence that is so tightly shot and harsh that it’s claustrophobic. Throughout the film, Fournier highlights the cultural and spiritual poverty of their domestic lives: the dark bungalow with neglected, greasy kitchen cupboards where one boy lives with an alcoholic father; or the sterile dining rooms where families sit around the dinner table staring at each other in silence.

“As human beings we are confused,” Fournier told me when I spoke to him last spring, shortly before the Jutra Awards. The 36-year-old director believes that the complexity of modern life, including technology overload, environmental problems, and lack of spiritual guidance, overwhelms young people. “Thinking about these issues we are faced with brought to my mind a character who is feeling empty, although he is full,” Fournier says, referring to the lead character, Josh. “I wanted to explore that emptiness.” 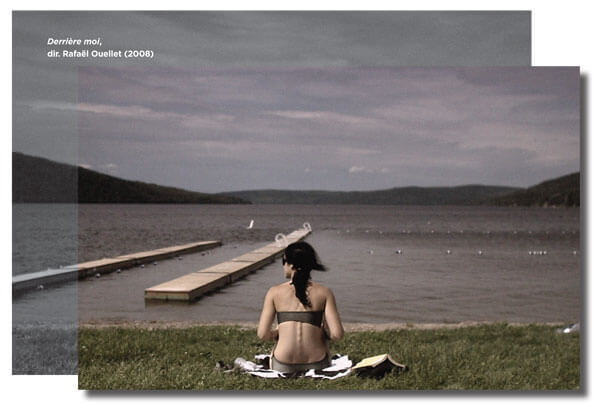 Derrière moi, which opened TIFF’s 2008 Vanguard section last year and A l’ouest de Pluton, which won the Special Jury Prize in the Narrative Features category at the 12th Bermuda International Film Festival, also portray the vulnerability of North American adolescents with exceptional clarity. In A l’ouest de Pluton, directors Henry Bernadet and Myriam Verreault recruited a group of 14- and 15-year-olds, all non-actors, from a Quebec suburban high school and followed them for a 24-hour period. While the film is scripted, much of the dialogue was improvised. The shots are long and the camera hand-held. The film’s central drama is a house party where an unpopular girl invites a group of fellow students to celebrate her birthday. A group of them trash the house, stealing the family pictures off the wall and throwing them in a field. One boy is violently beaten. Another girl is seduced by a young boy then abandoned by him after they have sex. The teenagers are wild and uncontrolled—overconfident, hypersexual, ignorant, greedy. Yet they also seem utterly lost, navigating new experiences without wisdom or the guidance of adults.

Derrière moi is a slow-moving, cynical tale of Betty, a prostitute who travels to a small town and recruits lonely 17-year-old Lea into prostitution. The seduction of Lea by Betty is the centre of this psychological drama, although the film is nearly plotless until the final scenes.

Shot in dark indoor settings, the film’s shadowed, grainy texture is at times like a B-horror film: Betty is a vampire, preying on Lea’s sexual energy and youthful innocence. Ouellet wrote Derrière moi because he’s interested in how young North American women are drawn into the sex trade. “I worked at MusiquePlus for seven years,” explains Ouellet. “I was responsible for trying to sell adolescents a lifestyle based on consuming the latest iPod and being like everyone else. But young people have so much curiosity and naiveté and idealism. With my films I want to try to show them something else.” As in A l’ouest du Pluton, in Derrière moi it appears that no one is around to protect the young.

While their stories are at times opaque and frustratingly slow-moving, what is remarkable about these New Wave films is their careful attention to the detail of character. Unlike the films of celebrated Quebec filmmakers such as Denis Villeneuve (Polytechnique, Maelström) and François Girard (The Red Violin), which feature exquisite images but often suffer from weak scripts, New Wave films are obsessively character-driven: the cameras meander through their stories, revealing nuanced emotions with facial expressions, body language and long, uncut sequences. And in contrast to the practised and frequently dogmatic cynicism of celebrated Québécois director Denis Arcand, the New Wave films compassionately (and often humorously) portray a society in the midst of a spiritual and social crisis.

The culture they evoke is an uneasy mixture of American excess and Nordic austerity. It seems utterly appropriate for this wintry nation that has somehow produced two of the splashiest, most commercial acts on the Las Vegas strip: Cirque du Soleil and Céline Dion. What’s not present in New Wave films is the warmth and easy-going chattiness—the so-called joie de vivre— that anglophone filmgoers often associate with Canada’s other solitude. And the backdrops of these stories aren’t the romantic historic neighborhoods tourists flock to see, but the dreary suburbs and small towns where most Quebecers—most North Americans—live.

Post-war Quebec was rigidly Catholic and conservative until well into the 1960s. Five decades ago, the large, rural Quebec family was promoted as the ideal. Along with the church, it was viewed as one of the central pillars of the nation. Today, Quebec has one of the lowest birth and marriage rates and one of the highest male suicide rates on the continent. Quebec has transformed from a highly religious culture, where community and church were central, to a highly urbanized, secular society with a deeply ingrained media culture in half a lifetime. It appears that this new generation of filmmakers are measuring the fallout of such rapid, irrevocable change. In the process, they have reached beyond the boundaries of their own culture to develop a cinematic language that is both universal and yet—if it’s not too loaded a term—distinct.