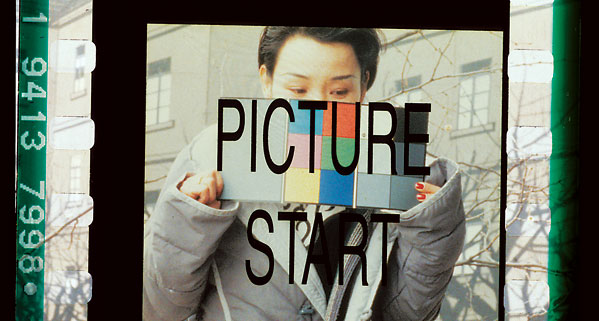 Frame from "Picture Start," a video installation screening as part of the Toronto International Film Festival.

It’s a familiar ritual in movie palaces and multiplexes all over the country. You find yourself in a lineup for a film that you know nothing about, aside from its reputation as a remarkable new work by a hot young director from the Carpathians, or maybe Polynesia. For sustenance, you have foregone popcorn in favour of an overpriced offering from the gourmet sandwich cart; it is the only food you will eat that day. You sit down among a chattering crowd of movie-industry insiders and/or civilians who’ve taken a week off work to do just this.

When you see the film, it is moving or hard-hitting or informative or not very good. Afterward, there is a stilted Q&A with the somewhat stunned-looking director, who does his or her best to answer questions that are incomprehensible even before they are translated into whatever language is required. You leave the theatre and head directly for the next lineup. The cycle begins anew.

Festival junkies seem to love it. But the trouble with turning moviegoing into such a special event is that it makes going into a theatre on any other occasion seem distinctly unglamorous. What’s more, the ever-shrinking piece of the marketplace for non-mainstream fare is indicative of a less-welcome phenomenon: films that generate buzz and sell out venues at festivals are failing to find audiences upon regular release — that is, when they actually stand to make a buck. And festivals may be hurting as much as they’re helping.

Festival-going is certainly more feasible than it’s ever been thanks to the abundance of events throughout the country. Though the Toronto International Film Festival remains the most prominent as a star magnet, Toronto is the site of dozens of other festivals, each with a special focus — documentaries, experimental movies, movies about music, movies for kids, movies with queer content, and so on.

Montreal has a comparable diversity, including two major fests in the fall. Indeed, it recently had three duking it out—in 2004, the government funding bodies pulled their support from the World Film Festival after a battle with founder Serge Losique and got behind New Montreal Film Fest, only to see Losique emerge victorious when the newcomer flopped.

This fall also features major events in Vancouver, Sudbury, Calgary, and Halifax. Audiences in Whistler and Kingston are not deprived since they get fests later in the winter. In fact, TIFF’s Film Circuit division circulates movies to 200 groups in 164 small towns and communities so that special festival vibe can be simulated just about anywhere that has a room large enough for a decent screen and another room to accommodate a discussion about recent Central Asian cinema.

Robust box-office numbers have thus far spared the movie business from suffering the same hardships as other industries, but the situation was already bad for smaller players before the recession hit. The so-called indie film boom of the ’90s was widely pronounced dead last fall when several mini-studios devoted to specialty titles were shuttered by their corporate parents. One of the movies to suddenly be left without a distributor was Slumdog Millionaire, which was very nearly lost in the shuffle. While hits like Slumdog, Juno, and Little Miss Sunshine have still done big business in recent years, far more titles disappear without a trace. That’s especially true of little movies that don’t happen to feature the same stars as their more heavily marketed Hollywood counterparts.

This year’s been particularly brutal for anything not starring fighting robots — in the first part of 2009, only Sunshine Cleaning, a cutesy dramedy starring Amy Adams, had the legs necessary for a smaller title to do decent business. Many rep theatres that used to specialize in second-run or art-house titles have discovered they’re better off booking double bills of ’80s favourites, cult curios, or even their own mini-festivals.

Programmers, theatre owners, and distributors are understandably flummoxed by the trend that’s emerging. Nearly every city in Canada boasts an increasingly cine-literate and enthusiastic pool of moviegoers who mobilize themselves with program books and flock to their favourite festivals. For example, Hot Docs had its biggest turnout ever in 2009.

And yet those audiences seem oddly disinclined to support the very same titles when they show up at the multiplex without that frisson of excitement only a festival can provide. Yes, Slumdog Millionaire went on to Oscar glory and boffo box office after winning TIFF’s People’s Choice Award last year, but the same fate was not meted out to past winners like Bella or Zatoichi.

Of course, one easy answer is that the festival crowd has seen these movies already and doesn’t need to rush back to theatres when they get a broader release. But even so, they’re evidently not doing much to stoke that ever-important word-of-mouth buzz that replaces a proper marketing campaign for most low-budget films (which, it should be noted, generally don’t earn screening or rental fees for use in festivals).

It may seem wrongheaded to blame festival-goers for their enthusiasm — they who are already three movies deep in a five-movie day, ready to make that next great discovery—but the delicate ecosystem required to support a truly vibrant film culture demands something more of them.